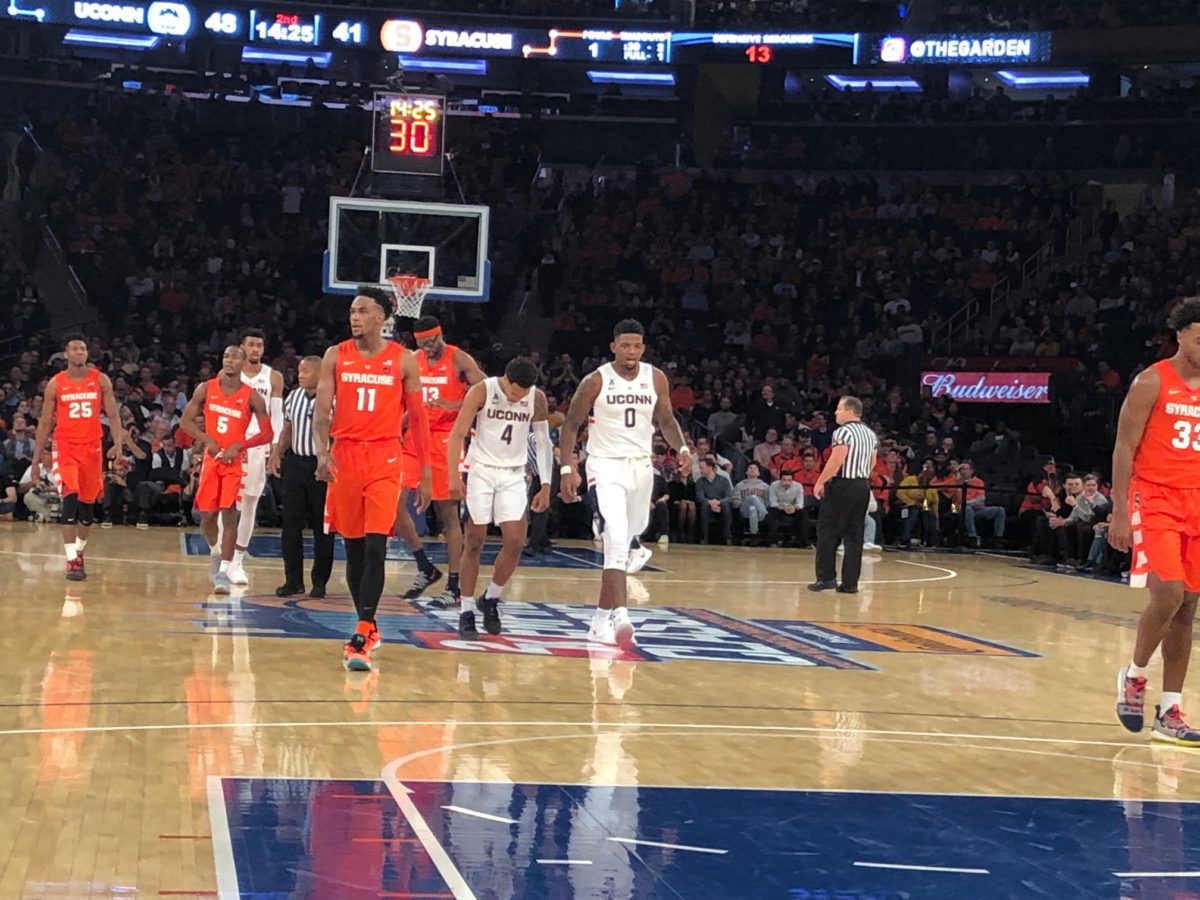 By ADAM ZAGORIA NEW YORK — As his team walked to the locker room with a 6-point halftime lead on Syracuse, Dan Hurley stood on the Madison Square Garden court furiously clapping his hands to show his enthusiasm. One half later, Hurley had delivered his first signature win as coach of the UConn Huskies courtesy of an impressive 83-76 victory over No. 15 Syracuse in the 2K Empire Classic. In a contest between former league rivals with huge New York City fan bases, the game had the feel of an old-school Big East battle The win came with Hurley’s parents, Bob Sr. and Chris, and his sister Melissa and her family sitting behind the UConn bench. And it came against a Hall of Fame coach in Syracuse’s Jim Boeheim who used to conduct in-home visits in the Hurley household when Bob Sr. coached at St. Anthony’s High School in Jersey City. Hurley, who is set to earn $2.75 million in his first year after leaving Rhode Island, heard chants of “Dan-ny Hur-ley” from the fired-up UConn crowd in attedance. The Huskies (3-0) will face the Oregon/Iowa winner in Friday’s title game at 7 ET (ESPN2). Syracuse (2-1) will face the loser at 4:30. “These guys got what they deserved, a great moment in the Garden,” Hurley said. “Now they get another chance tomorrow.”

Dan Hurley is just a little fired up as his team takes a 38-32 halftime lead on Syracuse. pic.twitter.com/EWxV3LbmM6

UConn raced out to a 13-4 lead and after surrending the lead once in the first half, the Huskies never looked back. They led 38-32 at the break and led by as many as 13 in the second half. Senior forward Eric Cobb, who averaged 1.7 points and 2.7 rebounds last season, had a huge game for the Huskies, notching 13 points and 13 rebounds. “It’s just a step forward from last year,” Cobb said. “We’re just trying to get the program back to where it used to be.” Said Hurley of Cobb: “Eric ’s a guy who can really catapult this year into some real things professionally and he certainly looked the part tonight.” Jalen Adams went for 16 points, 8 boards and 4 assists, Alterique Gilbert had 16 points, 8 assists and 6 rebounds and St. Anthony’s product Tarin Smith notched 14 points and 6 assists. Christian Vital added 11 points. UConn shot 12-of-21 (57 percent) from deep, while Syracuse shot 6-of-22 (27 percent). For UConn to do well this year, Hurley needed Adams, the team’s best player, to buy in after Kevin Ollie, the coach who recruited him, was let go last spring. And he has, praising Hurley’s enthusiasm and fire. “I’ve been through the ups and the downs,” Adams said. “I’ve learned to roll with it, not to get too high or too low, just going off my coach’s energy “He’s just given me crazy confidence.” With some 60 NBA scouts in attendance New Jersey native Jalen Carey, who starred at nearby Montclair Immaculate, led the Orange with 26 points on  9-of-14 shooting and 7 rebounds after combining for 7 points in his first two games. Syracuse star Tyus Battle , who was trained by Hurley as a youngster in New Jersey, had 16 points, 4 rebounds and 3 assists while shooting 7-of-17 from the floor.

Syracuse misspelled Buddy Boeheim’s last name. How in the world does that happen? pic.twitter.com/tFwVJXa99j

Syracuse closed to within 70-66 on a Battle 3-pointer with 3:43 remaining. But after Battle missed another jumper, Gilbert drained a three that extended UConn’s lead to 73-66. Adams then drained another three from the left side to ice the game and give UConn a 76-66 lead. After Syracuse closed to within 76-71, Smith drained two free throws with 52.3 seconds left to make it 78-71. Gilbert added two more from the stripe for an 81-74 lead. “When you get a chance to play against a Top 25 team and prove a lot of people wrong, there’s nothing better than that,” Adams said. “The energy was just there for me right out of the gate.”   ***For more on Hurley’s relationship with Wounded Warrior Kevin McMahon, who was honored at halftime, read this. Follow Adam Zagoria on Twitter And like ZAGS on Facebook