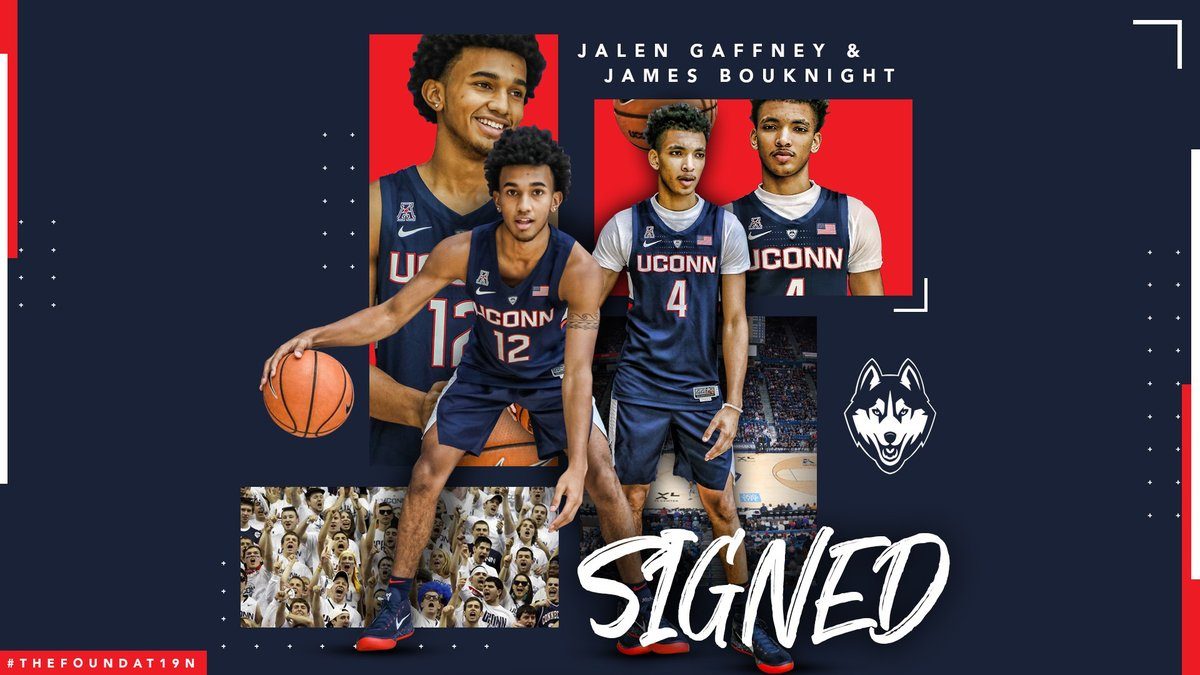 As UConn heads into Thursday night’s showdown with former Big East rival Syracuse at Madison Square Garden, they announced the signings of two players in the Class of 2019. Guards James Bouknight (Brooklyn, N.Y.) and Jalen Gaffney (Columbus, N.J.) both signed their Letters of Intent. UConn remains involved for several uncommitted players, including wings Tre Mitchell and Precious Achiuwa and bigs Kofi Cockburn, Qudus Wahab and Akok Akok. “We feel that in Jalen and James, we’ve signed a backcourt with a tremendous upside,” head coach Dan Hurley said. “Beyond their skills on the court, both of them are tremendous student-athletes from great families and basketball backgrounds. We are thrilled to have them join our program.” Bouknight, a 6-4 shooting guard, is a Top 100 prospect, known as a prolific scorer whose strengths include long range and mid-range jumpers as well as slashing to the rim. He attended LaSalle Academy in Manhattan for two years before moving to the MacDuffie School (Granby, Mass.) last season, where he averaged 19.3 points and 5.0 rebounds per game. Bouknight, who verbally committed to UConn on September 18, his 18th birthday, had a strong spring and summer playing AAU ball for the PSA Cardinals, including a particularly impressive performance at the high-level Hoop Group Summer Fest. “James is a dynamic wing player,” Hurley said. “He loves to play and is a pleasure to watch on the court. We feel that he is one of the best guard prospects in the country and we’re excited about what he can add to our program. His athleticism and playmaking ability will translate immediately in our system.” Gaffney, an explosive 6-2 combo guard, attends the Westtown School in West Chester, Pa. The top 100 prospect is a solid ballhandler who can score from either guard spot with superior athleticism and possesses solid three-point range. A member of Team Rio during the spring and summer, Gaffney averaged 15 points and 3 rebounds a game, while shooting 55 percent overall and over 50 percent from three-point range. He is rated as a top five overall prospect in Pennsylvania and the No. 16 overall point guard by ESPN. “Jalen is an explosive point guard with great size and athleticism,” Hurley said. “His ability to create for himself and others will allow him to contribute for us right away.” “The signing of these two student-athletes represents a major step in recruiting the Northeast region for us,” the UConn coach added. “In Jalen and James, we have two of the best prospects in the Northeast coming to contribute in our pursuit of championships.” (Release/Photo via UConn Athletics.)