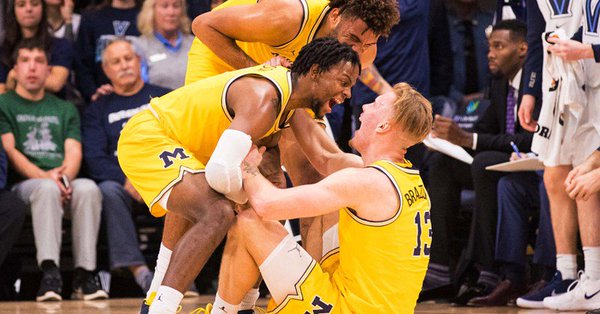 By ROB MAADI VILLANOVA, Pa. (AP) — Charles Matthews set the tone with a slam and celebrated by flexing to the crowd. Quickly, the rematch turned into a rout. Matthews scored 19 points, Ignas Brazdeikis had 18 and No. 18 Michigan beat No. 8 Villanova 73-46 Wednesday night in their first meeting since last season’s national championship game. Villanova captured its second title in three years with a 79-62 victory over Michigan in April but was completely overmatched in the second game at its newly renovated Pavilion. “I don’t think when I’m out there,” Matthews said, explaining his emotional reaction to a basket less than 90 seconds into the game. “It was a fun, exciting game. I got the dunk and I screamed.”

Eric Paschall scored 10 points and Phil Booth had nine for the Wildcats (2-1). The Wolverines (3-0) jumped ahead early and never let up. They led 10-2 less than five minutes in and expanded the lead to 22-8 on Matthews’ jumper midway through the opening half. A 17-3 run followed, giving Michigan a 39-13 lead. Matthews’ dunk and consecutive 3-pointers from Isaiah Livers and Jordan Poole highlighted the run. Matthews capped the impressive first half with a steal and layup to send Michigan to the locker room with a 44-17 lead. “I’m very impressed with Michigan,” Villanova coach Jay Wright said. “Really like their team, great togetherness, great execution. It’s my fault I’m running a lot of guys out there. We’re not as organized as we want to be. We’re trying to figure out a lineup early in the season. We didn’t have the cohesiveness to play a good team like that.” Villanova’s frustration was evident after Michigan’s Zavier Simpson’s flagrant foul led to a brief scuffle with Dhamir Cosby-Roundtree near midcourt with 13 minutes remaining and Michigan leading 52-24. The Wildcats couldn’t make any push in the second half, and fans hit the road early. “They executed way better than we were prepared to play defense,” Booth said. Neither team looked like the two squads who met in San Antonio seven months ago. Villanova lost four players who were drafted in the first 33 picks of the NBA draft. AP Player of the Year Jalen Brunson plays for the Dallas Mavericks. Omari Spellman is with the Atlanta Hawks. Mikal Bridges landed in Phoenix after a draft-night trade with the 76ers, and Donte DiVincenzo — who scored 31 points in the title game — is with the Milwaukee Bucks. Michigan lost three of its top four scorers. Moe Wagner, the star big man, was drafted by the Lakers in the first round and is playing in Germany. Duncan Robinson and Muhammad-Ali Abdur-Rahkman graduated. “They’re a young team and they lost a lot of people,” Michigan coach John Beilein said. “This is a November win. That’s all it is. We have to learn from it, forget it and get ready for our next game.” IMPRESSIVE FRESHMAN Brazdeikis’ teammates love his attitude and confidence on the floor. “Iggy is like a mean pit bull,” Simpson said. THE FINN Bill Finneran, the Villanova alum who was the lead donor for the school’s on-campus court that underwent a $65 million face-lift, was honored at halftime. “The worst game you’re going to see here,” Finneran told the crowd. BIG PICTURE Michigan: Brazdeikis showed he can score against tough competition, performing well against top defender Paschall. Brazdeikis and Matthews give the Wolverines a formidable wing duo going forward. Villanova: Showed its youth, giving Wright plenty of teaching points. The Wildcats relied on 3s the first two games, taking more shot attempts from beyond the arc than inside. They couldn’t get them to fall from long range, going 3 for 15. UP NEXT Michigan hosts George Washington on Saturday. Villanova hosts Furman on Saturday. Follow Adam Zagoria on Twitter And like ZAGS on Facebook