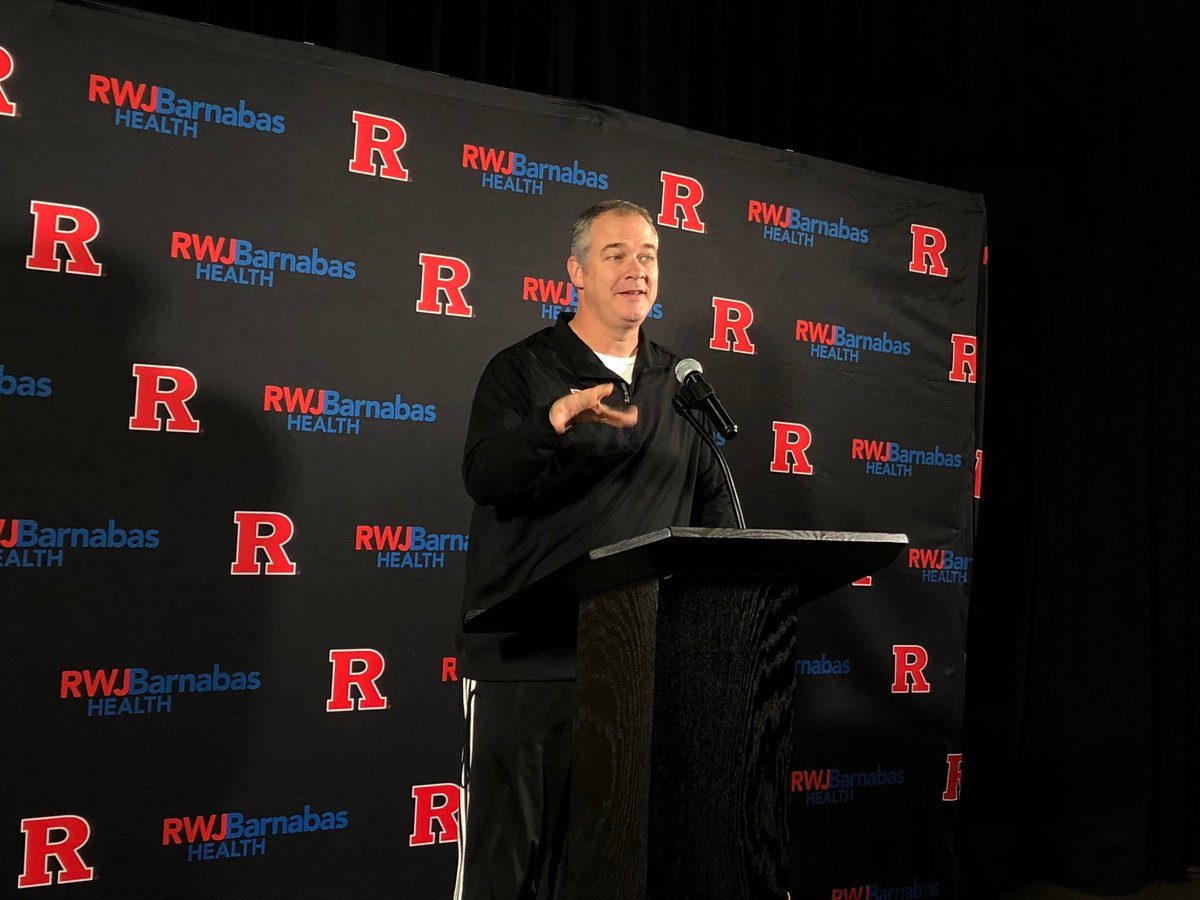 By ADAM ZAGORIA PISCATAWAY, N.J. — Rutgers has not qualified for the NCAA Tournament during Ron Harper Jr.’s lifetime. In fact, Harper Jr. was born in 1998, seven years after the Scarlet Knights’ last appearance in the Big Dance in 1991. But the 6-foot-6 Harper, the son of five-time NBA champion Ron Harper, chose Rutgers over out-of-state options like Nebraska because he wants to help build something at Rutgers under third-year coach Steve Pikiell. Now, with his freshman season about to begin, the Scarlet Knights are undefeated and dreaming big, like every other team in the nation. “As a team we just want to win games and the ultimate goal for this season is to reach the tournament, the NCAA Tournament,” Harper Jr. told me Tuesday at Rutgers Media Day. Since joining the Big Ten Conference in 2014, Rutgers has finished 14th out of 14 teams four straight years. Former coach Eddie Jordan went 17-49 overall in two years in the league, and 3-33 in league play. Entering his third season at the helm, Pikiell is 30-37 overall, 6-30 in the Big Ten. Once again, Rutgers was picked to finish last this year. Still, he and his team gave fans reason for hope at the end of last season when they beat No. 11 Minnesota and No. 6 Indiana on back-to-back days in the Big Ten Tournament at Madison Square Garden before falling in the quarterfinals to No. 3 Purdue. Gone from that team are stars Corey Sanders and DeShawn Freeman. This team now belongs to sophomore guard Geo Baker, the Derry, N.H., native who averaged 10.8 points and 2.6 assists last season and posted 15 points in the Big Ten Tournament win over Indiana. Rutgers has a ton of size to compete in the rugged Big Ten, with 7-footer Shaq Doorson, 6-10 Myles Johnson and Issa Thiam and 6-9s Shaq Carter and Mamadou Doucoure. Pikiell refers to the two Shaqs as “Big Shaq” and “Little Shaq.”

I don’t know how many Big Ten games this @RutgersMBB team will win but they definitely have Big Ten size.

The 2018 recruiting class of Harper Jr., Carter, 6-4 wing Montez Mathis and 6-5 shooting guard Caleb McConnell was ranked No. 50 nationally by 247Sports.com. Baker, for one, is highly optimistic. “I’d say our chemistry [is different],” he told me. “We do everything together. Last year we had kind of split apart at times. Our whole team is on the same page. We talk about it every day.” He added: “It’s just a different vibe this year. Maybe it could be the fact that we’re all coach Pikiell’s guys. I feel like we all have the same mindset and the same goal and we’ve been a lot more serious about that goal this year.” Now that he has an entire roster of his guys, Pikiell thinks he has the talent to compete in the brutal Big Ten. The Knights also have a solid non-conference schedule with games against St. John’s, at Seton Hall and at Miami. “I hope you see that our talent has improved,” Pikiell said. “I know where they have us picked and all that stuff, our talent’s better. And we’ve got to keep making sure our talent’s better because the fifth-place team in our league [Michigan] played for the national championship last year. So that’s what this league is.” Rutgers has had high hopes before. Under former coach Freddie Hill, Rutgers landed Mike Rosario out of Bob Hurley’s famed St. Anthony’s program and Greg Echenique out of a St. Benedict’s Prep team coached by Dan Hurley, now the coach at Pikiell’s alma mater UConn. But within a couple of years, both players had transferred and Hill was fired. Under Mike Rice, Hill’s successor, the Knights recruited well locally, landing guys like Myles Mack and Derrick Randall out of Paterson (N.J.) Catholic and Kadeem Jack from New York Catholic power Rice. But Rice was eventually fired amid a scandal before he resuscitated his career as a high school and AAU coach with the Patrick School and Team Rio. Now here comes the ever-optimistic and patient Pikiell, who seems to be building things the right way, with a mix of local guys like Harper Jr. and out-of-state guys like Mathis and Johnson. Pikiell isn’t going to keep New Jersey’s top kids like Scottie Lewis (Florida) and Bryan Antoine (Villanova) home, but he did land Harper Jr. and he has a nice piece coming in 2019 in 6-6 Gill St. Bernard’s point guard Paul Mulcahy.

Rutgers coach Steve Pikiell might be the nicest coach in D-1 basketball. Comes into media day and shakes every reporter’s hand. pic.twitter.com/nLP73i4xXw

“These are the kinds of kids I wanted and they wanted to be at Rutgers,” Pikiell said. “I love that part of it. These kids love Rutgers.” He added: “Some programs are already self-made, some programs are already ready to roll. I was a part of the beginning UConn and then 10 years later I come back and [Jim] Calhoun had it rolling. Do you want to be part of the beginning? I want to blaze a trail with some of our guys. Do you want to follow the pack or blaze a trail?” Harper Jr., who won the MVP at the prestigious IS8 tournament in New York last spring, is ready to help blaze a trail at his home-state university. “I want to go somewhere where I can make a change and I can make an impact right away,” he said. “And Rutgers was that place for me.”
Follow Adam Zagoria on Twitter
And Like ZAGS on Facebook