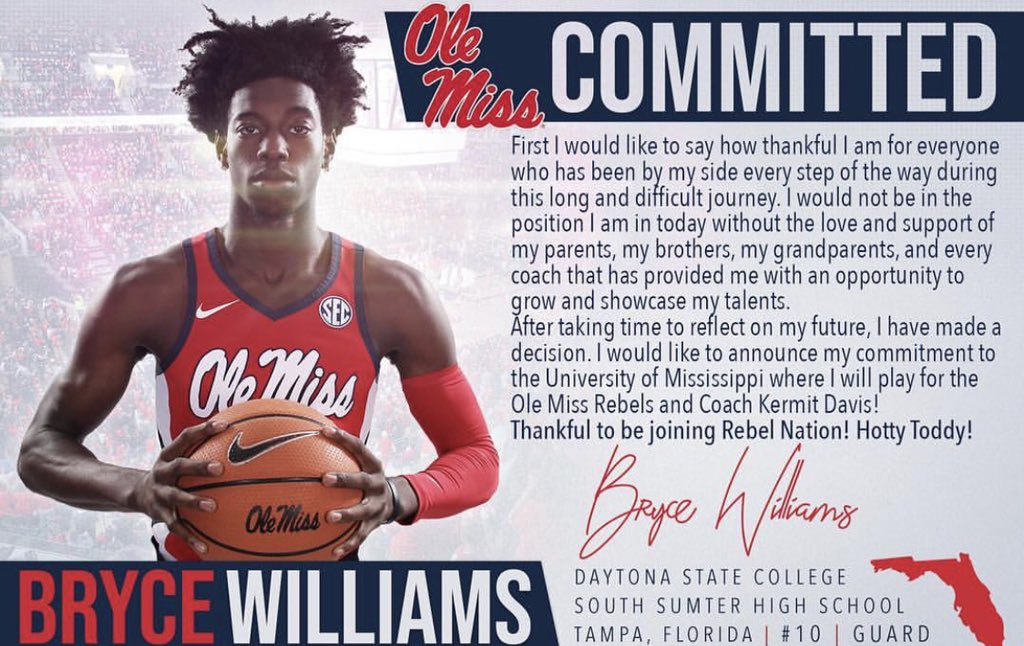 By JACOB POLACHECK Bryce Williams, the 6-foot-3 JUCO guard from Daytona State (FL) College, committed to Ole Miss on Thursday. He took his official visit to Ole Miss last month (Sept. 29). “First, I would like to say how thankful I am for everyone who has been by my side every step of the way during this long and difficult journey,” said Williams in a press release Thursday. “I would not be in the position I am in today without the love and support of my parents, my brothers, my grandparents, and every coach that has provided me with an opportunity to grow and showcase my talents.” Williams chose Ole Miss over schools such as Louisiana Tech, Oklahoma State, and Florida Atlantic, among others. He also took an official visit to Oklahoma State last month (Sept. 22). “After taking time to reflect on my future, I have made a decision,” said Williams. “I would like to announce my commitment to the University of Mississippi where I will play for the Ole Miss Rebels and Coach Kermit Davis! Thankful to be joining Rebel Nation! Hotty Toddy!” Williams joins Antavion Collum and Rodney Howard as the third commit in Ole Miss’ 2019 class. Playing with Daytona State, Williams averaged 14.5 points and shot 45.9 percent from the floor in 24 games last season. Follow Jacob on Twitter Follow Adam Zagoria on Twitter And Like ZAGS on Facebook