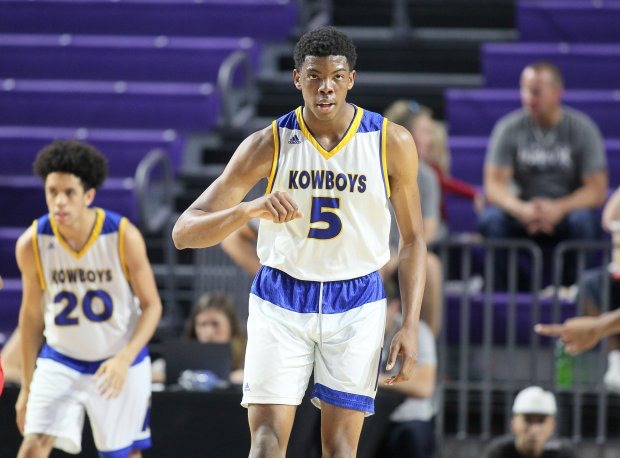 By RYAN McMULLEN Omar Payne, the 6-foot-9, forward from Montverde Academy (FL) and Team Parsons AAU, announced his commitment to Florida Monday on Twitter. Payne picked the Gators over the likes of Florida State, Louisville, LSU, Ohio State, Texas, and UCF. After taking an official visit earlier in September, he was ready to make the call for Mike White and staff. They offered him in last June and have been consistent with his recruitment ever since. UF is getting a high energy, aggressive big man who has a tremendous upside. His rebounding, paint protection, and post presence sticks out from other prospects. Payne is continuing to develop on the offensive end. “He’s a great kid and an amazing athlete,” Montverde coach Kevin Boyle said. “It’s hard to imagine any one in the country better defensively at 6’9 or above. He reminds me defensively of Dennis Rodman with his elite ability to defend and rebound with the offensive arsenal of Clint Capela. Omar is an underrated passer who is one of the most unselfish players in the country.” The forward teams up with five-star Tre Mann and walk-on shooting guard Alex Klatsky for Florida’s 2019 class. The Gators remain in the hunt for Klatsky’s Ranney (N.J.) School teammate Scottie Lewis, who is down to Florida and Kentucky. Follow Ryan on Twitter Follow Adam Zagoria on Twitter And like ZAGS on Facebook