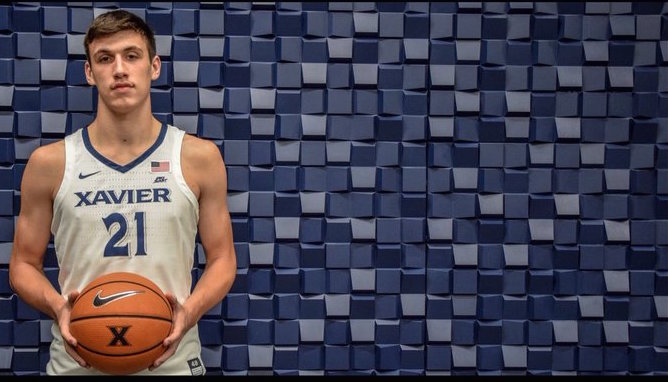 By ADAM ZAGORIA Zach Freemantle, the 6-foot-9, 220-pound power forward from Bergen (N.J.) Catholic and the NJ Playaz, committed to Xavier following his official visit. He also considered Penn State, Pittsburgh, Northwestern, Boston College and St. Joe’s. “The relationship with the coaches and the fit and opportunity they bring is why I chose them,” he said. “And [Coach Travis Steele] said I’m going to create mismatches all over the floor, especially on screens and stuff like that.” Freemantle averaged 20.0 points a game last yearto help Bergen Catholic go 23-4 and reach the Bergen Jamboree finals, where it lost to Don Bosco Prep. The Crusaders also lost to Don Bosco in the semifinals of the North Jersey, Non-Public A tournament. “Zach has a unique skill set, whether that’s rolling to the rim or popping for a jump shot,” Playaz coach Chico Johnson said. “He’s worked tirelessly on those skills over the past couple of years, making him hard to defend. “I believe it’s a easy fit into Xavier’s system both offensively and defensively. Zach’s upside remains huge because he’s still getting better.” Said BC coach Billy Armstrong: “Zach just keeps getting better. His game is evolving being able to play inside and out. He is strong and athletic enough to play inside and skilled enough to play on the perimeter making decisions and threes. I feel he has the potential to be a pro.” He joins shooting guard Elias King and power forward Daniel Ramsey in Xavier’s 2019 class.

Blessed to announce that I have commited to Xavier University! ⚔️ pic.twitter.com/KtRWY3u4H4