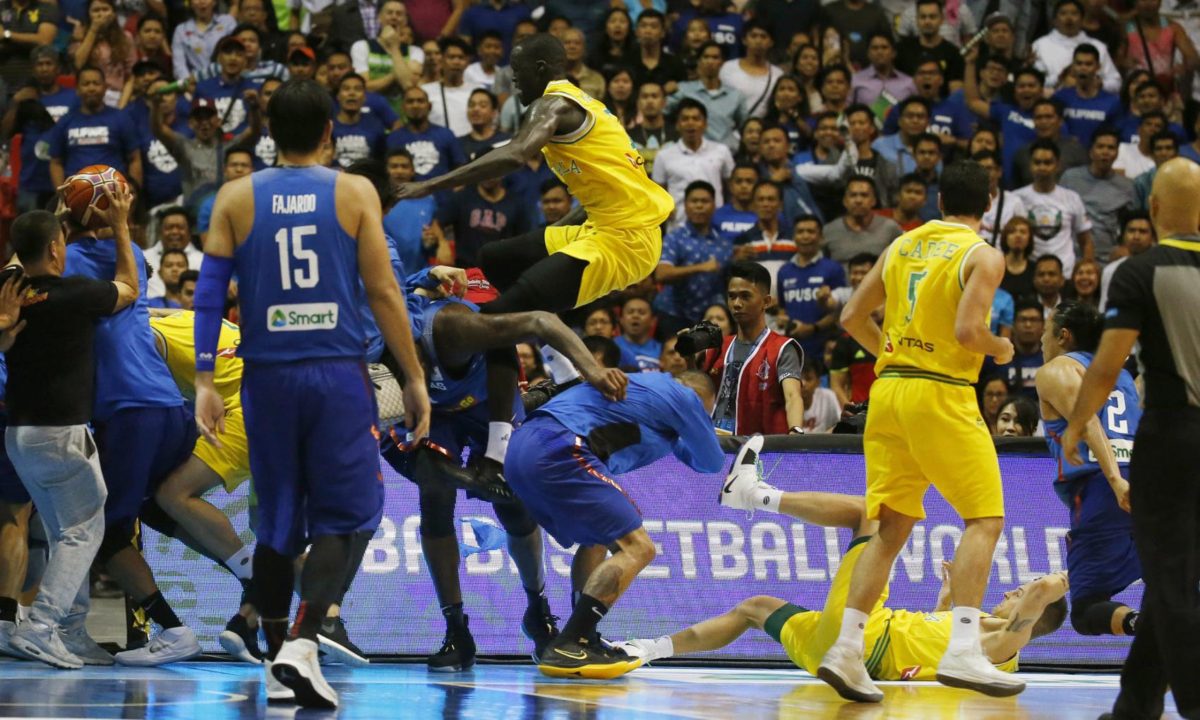 MELBOURNE, Australia (AP) — Thirteen basketball players and two coaches were suspended and fined Thursday, and sanctions were imposed on the national federations of the Philippines and Australia after a brawl during an Asian qualifier for the sport’s World Cup. Video of the brawl on July 2 was widely played around the world, with punches thrown, chairs tossed at players from the crowd, and security needed to restore order. Ten Philippines players were suspended: Japeth Aguilar and Matthew Wright (one game each); Terence Romeo, Jayson Castro William, Andray Blatche and Jeth Rosario (three games each); Roger Pogoy, Carl Cruz and Jio Jalalon (five games each); Calvin Abueva (six games, because of prior unsportsmanlike behavior in a FIBA competition). FIBA, the sport’s governing body, said Philippines assistant coach Joseph Uichico was suspended for three games for unsportsmanlike behavior. Head coach Vincent “Chot” Reyes was suspended for one game and fined for unsportsmanlike behavior, as was the national federation. Philippines federation president Al Panlilio said later Thursday in Manila that “it could have been worse.” “FIBA was quite fair in the process,” he said, adding he wasn’t sure if the federation would appeal. Australian player Daniel Kickert was given a five-match ban for unsportsmanlike behavior. Basketball Australia said Milwaukee Bucks forward Thom Maker received a three-game ban and Chris Goulding a one-game suspension. Basketball Australia was also fined $110,000 for removing floor decals a day before the game. Kickert was seen elbowing a Philippines player in response to a foul on Goulding before the brawl erupted. Basketball Australia chief executive Anthony Moore said it was unlikely the organization would appeal the bans. “As we stated at the outset, Basketball Australia sincerely regrets the incident,” Moore said. “We acknowledge the sanctions handed down against Australian players and acknowledge the sanctions imposed against Philippines players and officials involved in the incident. We are seeking further clarification from FIBA about possible sanctions against other officials and fans involved in the incident.” Photo: Bullit Marquez, AP Follow Adam Zagoria on Twitter And like ZAGS on Facebook