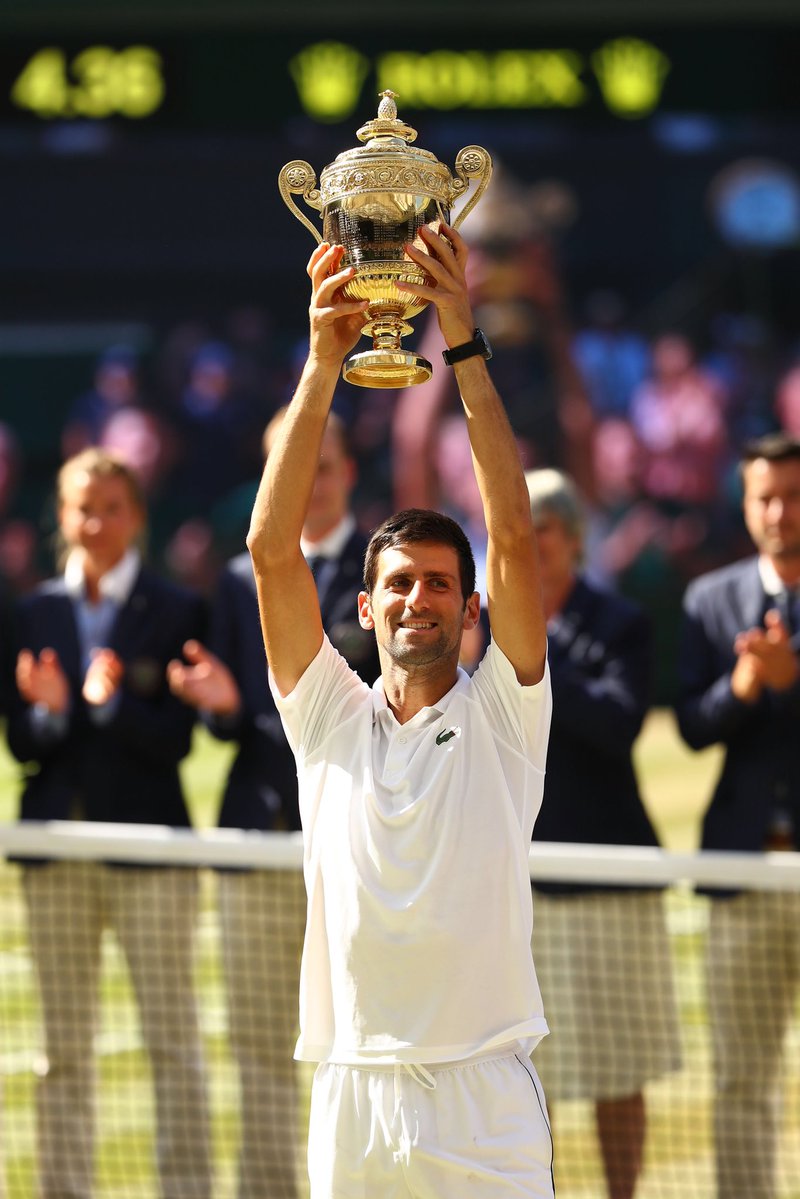 LONDON (AP) – Novak Djokovic was disconsolate and injured when he left Wimbledon a year ago, quitting during his quarterfinal because of a painful right elbow that would need surgery. Djokovic was so dispirited by his upset exit at the French Open last month that he vowed, in the heat of the moment, to skip the grass-court circuit. Good thing he didn’t stick to that. Just look at him now, back at his best and Wimbledon’s champion for the fourth time. Djokovic ended a Grand Slam drought that lasted more than two seasons, grabbing a lead in Sunday’s final right away against a weary Kevin Anderson and holding off a late challenge to win 6-2, 6-2, 7-6 (3). Anderson nearly managed to extend the match, five times standing just a point away from forcing a fourth set. Djokovic held steady on each one, then was as superior in the tiebreaker as he was most of the sun-drenched afternoon. It is Djokovic’s 13th major trophy, the fourth-highest total in the history of men’s tennis, trailing only Roger Federer’s 20, Rafael Nadal’s 17 and Pete Sampras’ 14.

Most Grand Slams ever (men):

But it’s also Djokovic’s first since he completed a career Grand Slam at the 2016 French Open. During that time, he struggled with the first major injury of his professional career, one that forced him off the tour for the last half of 2017. He eventually had an operation this February, and as his losses accumulated, his ranking fell out of the top 20 for the first time in more than a decade. At No. 21, Djokovic is the lowest-ranked Wimbledon titlist since Goran Ivanisevic in 2001.

Under a pale blue sky interrupted by only the occasional soft white puff of cloud, with the temperature at 86 degrees (30 Celsius), Djokovic started so well, and Anderson shakily. That might have been easy to anticipate beforehand. This was, after all, the 22nd Grand Slam final for Djokovic, and the second for Anderson, a 6-foot-8 powerful server who was the runner-up at last year’s U.S. Open and was aiming to become the first South African man to win at Wimbledon. Plus, Anderson could be excused for exhaustion. His semifinal was the second-longest Grand Slam match in history, lasting more than 6½ hours until he edged John Isner 26-24 in the fifth set. And that followed another extended fifth set in his 13-11 upset of eight-time champion Federer in the quarterfinals. So it was no wonder that, with all of that time on court, all of that stress on his racket-swinging arm, Anderson was visited by a trainer after Sunday’s opening set to get his right elbow massaged. Anderson was so out of sorts, his strokes so off-the-mark, that Djokovic gathered eight of the first 10 games even though he only conjured up two winners. No need for more, because Anderson gifted him 15 unforced errors in that span. By the conclusion of a third consecutive dud of a straight-set men’s singles final at the All England Club, Anderson had made 32 unforced errors, and the steady Djokovic merely 13. Another key: Djokovic was able to handle Anderson’s big serves much better than previous opponents. Widely considered the top returner in the game today, Djokovic broke Anderson four times. Consider that Anderson held in each of his last 27 service games against Isner, and dropped his very first on Sunday. And one more: Djokovic saved all seven break points he faced, including five that would have given Anderson the third set. As much as Djokovic is known for his body-bending defense and unerring reads on opponents’ serves, he’s also someone who fills his matches with histrionics and exaggerated reactions, whether violently smacking the side of his shoe with his racket – as he did against Nadal – or tearing off his shirt to celebrate a victory. This day was no different. Angered by fans making noise during points, he told the chair umpire to tell them to shut up, adding a colorful word in there. He pointed to his ear after winning one point, as if to say: “Who are you cheering for now?!” He blew a kiss toward the stands after another. But when he broke Anderson for the second time in three service games at the outset, Djokovic simply shook a clenched fist while calmly looking at his guest box above the scoreboard. The bright yellow digits on there showed that Djokovic already led 4-1 after all of 18 minutes. Might as well have declared him the champion, right then and there. It was so lopsided for the first hour-plus that spectators began pulling for Anderson, likely in the hopes of getting more tennis for the price of their tickets, which carry a face value of 210 pounds (about $275). Just his earning a random point, even via a Djokovic miscue, was reason to roar, it seemed. Surely, Anderson appreciated the support. Didn’t do a thing to alter the ultimate outcome, however. When Anderson pushed a forehand return into the net to end it, Djokovic exhaled. After they shook hands, Djokovic performed his ritual of bending down to grab a couple of blades of grass and plopping them in his mouth, savoring the triumph. ___ Follow Adam Zagoria on Twitter And like ZAGS on Facebook

Federer withdraws from Rogers Cup in Toronto next month