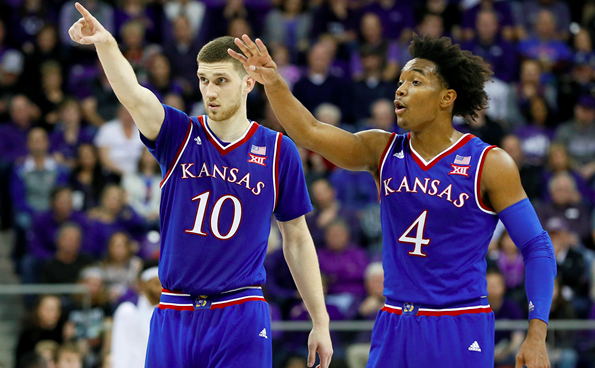 Kansas guards Devonte’ Graham and Svialoslav Mykhailiuk were among the 60 players selected in the 2018 NBA Draft at Barclays Center in Brooklyn Thursday night. Graham was the first Jayhawk taken at No. 34 of the second round by the Atlanta Hawks and was later traded to the Charlotte Hornets. Mykhailiuk was the 47th overall selection of the Los Angeles Lakers. Malik Newman and Billy Preston weren’t drafted. Preston was enrolled at Kansas, but never played there due to eligibility issues. Historically, Graham and Mykhailuk gives Kansas 82 all-time NBA Draft selections, including 24 in the Bill Self era which began in 2003-04. It marked the eighth time under Self the Jayhawks have had multiple draftees. Graham was the 2018 Big 12 Player of the Year and Kansas’ 30th Consensus All-America First Team selection. The Raleigh, North Carolina, guard broke two KU single-season records in 2017-18 with 282 assists and 1,474 minutes played. Also this season, Graham was the only player in the NCAA to averaged 17.0-plus points (17.3), 7.0-plus assists (7.2), 1.6-plus steals (1.6) and less than 3.0 turnovers per game (2.8). Graham concluded his career No. 13 in points (1,750), No. 5 in assists (632), No. 2 in 3-point field goals made (296), No. 7 in steals (197) and No. 2 in minutes played (4,498). A two-year starter for KU who was an All-Big 12 Second Team selection in 2018, Mykhailiuk broke the Kansas single-season record for 3-point field goals made with 115 in 2017-18. The Cherkasy, Ukraine, guard, who was also a two-time Academic All-Big 12 honoree, was second on the KU team with a 14.6 scoring average and was the only player to rank in the Big 12 in the top three in 3-point field goals made (third at 2.9) and 3-point field goal percentage (second at 44.4). Mykhailiuk concluded his career No. 4 on the 3-point field goals made list at 237, No. 5 on the 3-point field goals attempted list at 579 and No. 41 in scoring with 1,181 points. Kansas posted a 31-8 overall record in 2017-18 and advanced to its 15th Final Four. KU won its 14th-straight, 18th Big 12 and NCAA-leading 61st overall conference regular-season championship with a 13-5 league record. KU’s 14 consecutive titles, which began in 2004-05, set record for the most in NCAA history. Photo and release via Kansas Athletics
Follow Sean on Twitter
Follow Adam Zagoria on Twitter
And Like ZAGS on Facebook