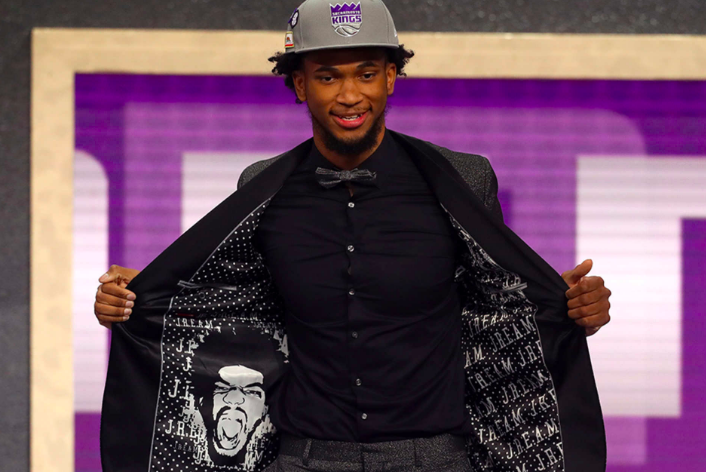 By SEAN BOCK Duke head coach Mike Krzyzewski has taken advantage of the one-and-done rule and his players have benefitted from it as two of his freshmen from the 2017-’18 season were selected in the top-10 and one in the second-round of the 2018 NBA Draft.

Marvin Bagley III was selected No. 2 overall by the Sacramento Kings, and Wendell Carter Jr. went No. 7 to the Chicago Bulls. For the third time in program history, two Blue Devils were picked in the top-10 of the same draft. Bagley, the national freshman and ACC player of the year, is looking to help the Kings clinch their first playoff berth since 2006, and is ready for the challenge. “I’m gonna to be ready to come in and give my all, man,” Bagley said on air after being selected. “I’m ready to come in with a hard work ethic, motor. You know the effort’s gonna always be there. I’m excited, I can’t wait. I can’t wait to get out there and get settled in and get to work.”

Duke, Kentucky and Kansas have the most lottery picks since 1999. No surprise. pic.twitter.com/wtZs6lDSGJ

Bagley’s former high school teammate DeAndre Ayton went No. 1 overall to the Phoenix Suns. Bagley grew up a Suns fan but is content with being drafted by Sacramento. “They’re starting to kind of build out and build new things,” said Bagley “I had a great feeling when I went there, just from the people that I met walking outside and seeing how friendly the people were and just meeting new people and meeting the front office and everybody involved with the Kings. I had a great feeling, especially working out, talking to Peja (Stojakovic), Vlade (Divac), the owner. Everybody, man, they gave me a good vibe and a good feeling about building something. I’m super excited to get down there and start building something.” “Marvin was as good as anyone in college basketball last season,” Coach K said. “A high double-double guy, and no one runs – as a big guy – any better. He’s shown he can put the ball on the floor, and he can shoot. He’s just going to get better. He’s a position-less big guy, which in today’s NBA is important.” Carter Jr. will face a similar situation in Chicago as Bagley in Sacramento. While the Bulls made the playoffs in 2016-’17, the franchise is coming off a 27-55 season, its lowest win total since 2003. “Carter Jr. is an absolute workhorse,” ESPN’s Jay Bilas said. “He’s not the most explosive player inside, but he’s really strong. He reminds me a little of a young Al Horford based on how he plays. I really like Carter Jr., and I think he has a tremendous future ahead of him.” “With Wendell, you have that double-double guy, who faced the basket for the first time once he got here to Duke,” Coach K said. “He can really shoot, and I liken him a lot to Al Horford – he’s taller, but he has a huge upside. He’s an incredible passer for any position, but especially for a big guy. He’s an easy kid to coach and fun to be around every day.” Carter Jr. will team up with veteran center Robin Lopez and Lauri Markkanen, who averaged 15.2 points and shot 43 percent from three in his rookie season after being selected No. 7 overall by the Bulls in the 2017 NBA Draft, in the Chicago frontcourt. Considered one of the best shooters in the draft, Grayson Allen was selected with the No. 21 pick by the Utah Jazz. Heading into his senior year, Allen was regarded as a mid-second round pick but had a great season averaging 15.5 points per game and boosted his stock during the pre-draft process. Allen was one of the two seniors drafted in the first round in this year’s draft. “In Grayson, you have a 22-year-old mature player,” said Coach K. “His body of work is there. No player that I can think of has been scrutinized more than him, and has come through it on a huge upside. An almost 2,000-point scorer, an All-American, an Academic All-American, but he has shown he can score the ball. He’s one of the best shooters in the draft, but he can also be a combo – he’s an off-the-charts athlete. He fits in really well in today’s NBA.” Allen will join forces with former ACC foe and Rookie of the Year nominee Donovan Mitchell, who congratulated Allen shortly after Allen was picked during his post-draft interview. “We can do so many things as you saw this season,” Mitchell said. “Adding a guy like Grayson who’s an elite scorer, great guy, great defender, who makes plays and is unselfish, we are very excited.” This is the fourth time three Duke players have been selected in the first round of the NBA Draft. Kentucky is the only program with more in the common draft era, which began in 1996.

Canadian Star @RjBarrett6 is the projected No. 1 pick in 2019 after a one-and-done at Duke.

Gary Trent Jr. was drafted No. 37 by the Sacramento Kings but was traded shortly after to the Portland Trail Blazers for two future second-round picks. According to ESPN’s Adrian Wojnarowski, the Trail Blazers see Trent Jr. playing a key role as a rookie as the former five-star recruit is one of the best shooters in the 2018 draft and will fit right in with the talented backcourt duo of Damian Lillard and CJ McCollum. “Gary is physically ready to play in the league, and he has a huge upside,” Coach K said. “He is a tremendous shooter. He can really compliment really good players, and he can be an asset to a team right away with his ability to score.” Trevon Duval was projected to be a mid-second round pick in most mock drafts, but went undrafted and will have to work his way onto an NBA roster with a strong showing in the NBA summer league.

Three of Duke’s incoming freshman are projected to go in the top-10 of the 2019 NBA Draft, according to ESPN. The consensus No. 1 player in the class of 2018 R.J. Barrett is expected to be the No. 1 pick in the draft while Cam Reddish is No. 3 (Atlanta Hawks) and Zion Williamson is No. 7 (New York Knicks). Photo: NBA.com
Follow Sean on Twitter
Follow Adam Zagoria on Twitter
And Like ZAGS on Facebook