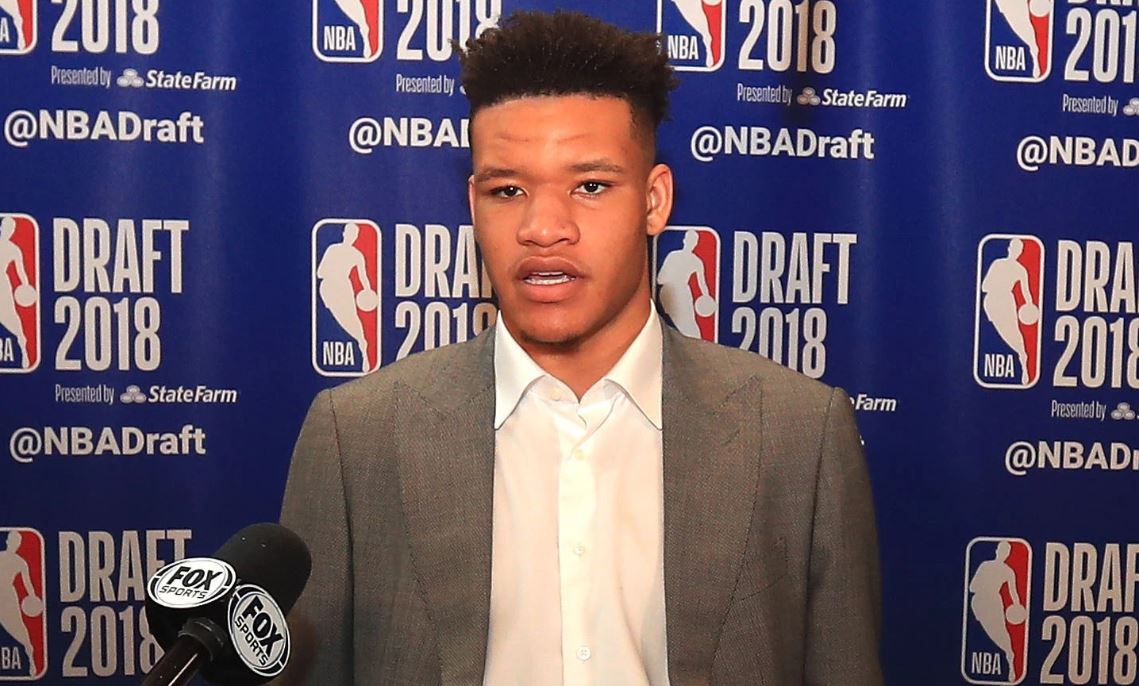 By ADAM ZAGORIA GREENBURGH, N.Y.  — The Knicks selected Kentucky freshman wing Kevin Knox with the No. 9 pick in the NBA Draft — and he was promptly booed by Knicks fans at Barclays Center. Some Knicks fans wanted Missouri’s Michael Porter Jr. instead. In picking Knox, the Knicks skipped not only Porter Jr., but Villanova’s Mikal Bridges as well.
“I like that. That’s motivation,” Knox said on ESPN. “A lot of the city wants Porter, but I’m ready to work, I’m ready to get to the organization and try to win some games, help the organization.”

The 6-foot-9 Knox is only 18 years and fills the Knicks need for a wing scorer. “I think that’s to an advantage of mine,” he said. “I’m just going to keep getting better and better. I’m only 18. I got a lot to learn. I’m going to be able to play for a great coach and learn from [Kristaps] Porzingis, learn from some other guys.” Knox said Wednesday he would be fine with the rebuilding Knicks after coming out of Kentucky, which is expected to win every year. “Oh yeah, I would be real patient,” he said. “But I’m going to go in there with a competitive mindset, go in there and try to give it my hardest and try and get a starting job. I know it’s not going to be easy, but I’ll be patient with the coaches.” Kevin Knox Sr., who played football at Florida State, recently had a 20-minute phone call with Knicks GM Scott Perry to discuss his son’s recent three-on-three workout that included Michigan State’s Miles Bridges, Kentucky’s Hamidou Diallo, SMU’s Shake Milton, Texas Tech’s Zhaire Smith and Miami’s Bruce Brown. “You never know, but I was thinking why would management call again to chat it up for 20 minutes about a potential client?” Knox Sr. told the Post. “We talked about the roster and what a perfect fit he could be. That’s what Scott and I talked about. Scott said he seems mature for his age. “Maybe Scott was calling to make sure I wasn’t a Lavar [Ball].” Knox certainly didn’t looked outmatched because of his age on the court last season. He averaged 15.6 points and 5.4 rebounds in 32.4 minutes per game for John Calipari’s Wildcats. Calipari this week compared Knox to rising Celtics’ star Jayson Tatum and said teams will regret passing on him. “Teams are going to say two years from now, ‘Why would we have passed on him?’” Calipari said during a conference call when I asked about Knox. “He’s the youngest player in this draft. He’s mentally mature. He’s got a great drive and will within his body. But physically his body isn’t there yet. “So you’re getting a 6-10 scorer who’s tougher than you think but has a way to go. He’s going to mature physically. What you find out when you get him is that’s what the league is moving to: 6-10 guys who can score the ball, can shoot it, can block shots. Athletically he can do it.”

It’s official. The @nyknicks have taken @KevKnox with the ninth overall pick.

Knox believes his game will adapt well to the NBA — and specifically with the Knicks. “I’ll be a really good player [in the NBA],” he said Thursday. “I know Coach [David] Fizdale loves those types of wings, he’s a player’s coach. He said he could use me pretty much everywhere on the court. So that’s kind of my sentiment.” Knox said he spent an hour with Fizdale following the recent workout. “He’s probably one of the greatest coaches I’ve ever met, as far as information and knowledge of the game and of your personal life,” he said. “We talked a lot about our personal lives. He gave me some tips about life. He’s a player’s coach. He’s really good coaching X’s and O’s and I really enjoyed my time with him.” He added: “He loves to coach guys who are all-around wings and he believes I fit that mold. He said they’ll put me in the post, outside in pick-and-roll situations, mismatches and be able to iso so they really pretty much said I’ll be everywhere.” Follow @AdamZagoria on Twitter