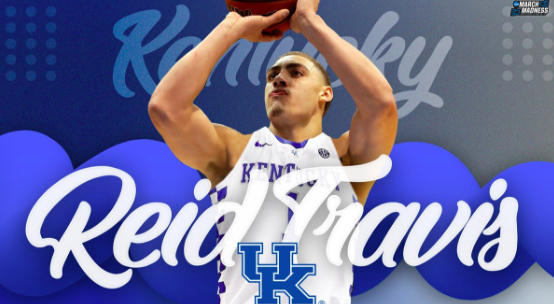 By SEAN BOCK Former Stanford forward Reid Travis announced on Wednesday that he has committed to Kentucky where he will be eligible immediately as a graduate transfer. “I want to thank everyone who has helped me with this process of taking the next step to pursue my dreams,” Travis said in his tweet. “I couldn’t be more excited for the future!” In his redshirt junior season at Stanford, Travis averaged 19.6 points and 8.7 rebounds per game, third in the PAC-12 in both categories. When Travis declared his intentions to transfer from Stanford and pursue a grad transfer year elsewhere on May 30, Kentucky immediately became the favorite. Travis graduated from Stanford this past weekend. “I felt good about where we stood with next year’s team, but when I found out how much Reid wanted to be here, I had to take a look and say, ‘OK, can he help us? Can he help our team become even more potent and can we help him reach his dreams?’ The answers were absolutely,” UK head coach John Calipari said in a statement. “You’re talking about a two-time all-conference player who could have very well entered the NBA Draft with what he’s done in his career. He was one of the best big men in the Pac-12 last season, if not the country. Our fans know when it comes to talent and experience, I’m always picking talent, but Reid gives us both.” In addition to Travis, Kentucky brings in the No. 2 recruiting class that features five-stars E.J. Montgomery, Keldon Johnson, Immanuel Quickley, Ashton Hagans, who officially reclassified from 2019 to 2018 last week, and four-star Tyler Herro. Calipari has lost Shai Gilgeous-Alexander, Hamidou Diallo, Kevin Knox, Jarred Vanderbilt, Wenyen Gabriel, Sacha Killeya-Jones, and Tai Wynyard since last season ended but has added Travis, Hagans, and Montgomery these past few months for next year’s team. The Wildcats also welcome back sophomore forwards Nick Richards and P.J. Washington to round out one of the most dominant frontcourts in the country heading into the 2018-’19 season. Photo: @MarchMadness on Twitter
Follow Sean on Twitter
Follow Adam Zagoria on Twitter
And Like ZAGS on Facebook