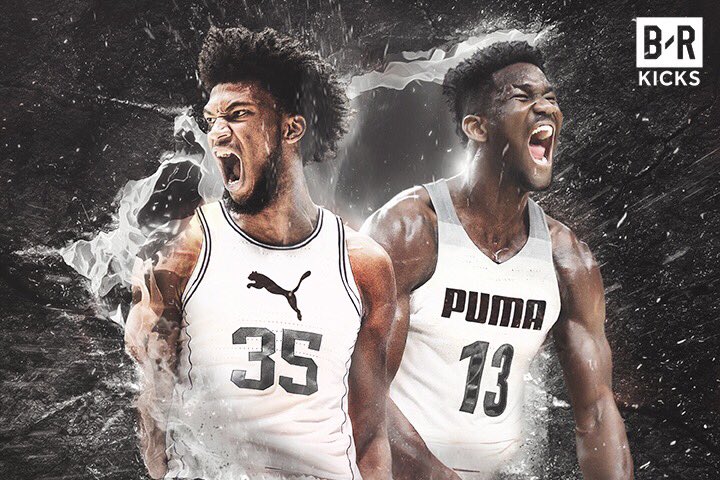 By ADAM ZAGORIA Puma ushered in a new era on Monday when it announced the signings of Deandre Ayton and Marvin Bagley III, two of the top five projected picks in Thurdsay’s NBA Draft. Puma, which hasn’t featured an NBA player since Vince Carter 20 years ago, also announced that Jay-Z would serve as the company’s creative director

Ayton’s deal will be a four-year, multi-million dollar contract, Nick DePaula of ESPN reported, while Bagley’s deal is reportedly five years and in the neighborhood of Kevin Durant’s seven-year, $60-million deal with Nike in 2007.

Ayton, who could become the first Bahamian taken No. 1 since Mychal Thompson in 1978, joins the company’s list of notable Caribbean clients such as Rihanna and Usain Bolt.

Ayton and Bagley both played on the Nike EYBL circuit in high school, as did projected Top 10 pick Trae Young, who is expected to sign with Adidas.

Ayton said Puma is well known in the Bahamas. “Most definitely,” he said. “Coming from a different country, a lot of people know about Puma. Everybody knows about Nike, too, but Puma is known overseas. It’s another huge step. It’s not like it’s foreign to the country I’m from. It’s lit. It’s nice to have a global brand everyone knows about.” Said Bagley: “I chose Puma because I wanted to be different. I saw an opportunity where I could come in and build from the jump and work to get to a certain level. I saw myself doing that. They have some real nice stuff. I’m very excited about it, and I can’t wait to get to know everybody, keep working with everybody and keep improving.” Ayton said he wanted to start something new and thus didn’t choose Nike, Under Armour or Adidas. “I don’t want to be under nobody else,” he said. “If I’m over here trying to bring on my shoe, and you’ve got somebody like LeBron [James] out here, you got the [Kevin Durants] out there, I’m not trying to be really competing with those guys like that. It’s always good to start your own thing and try to be great in it.”