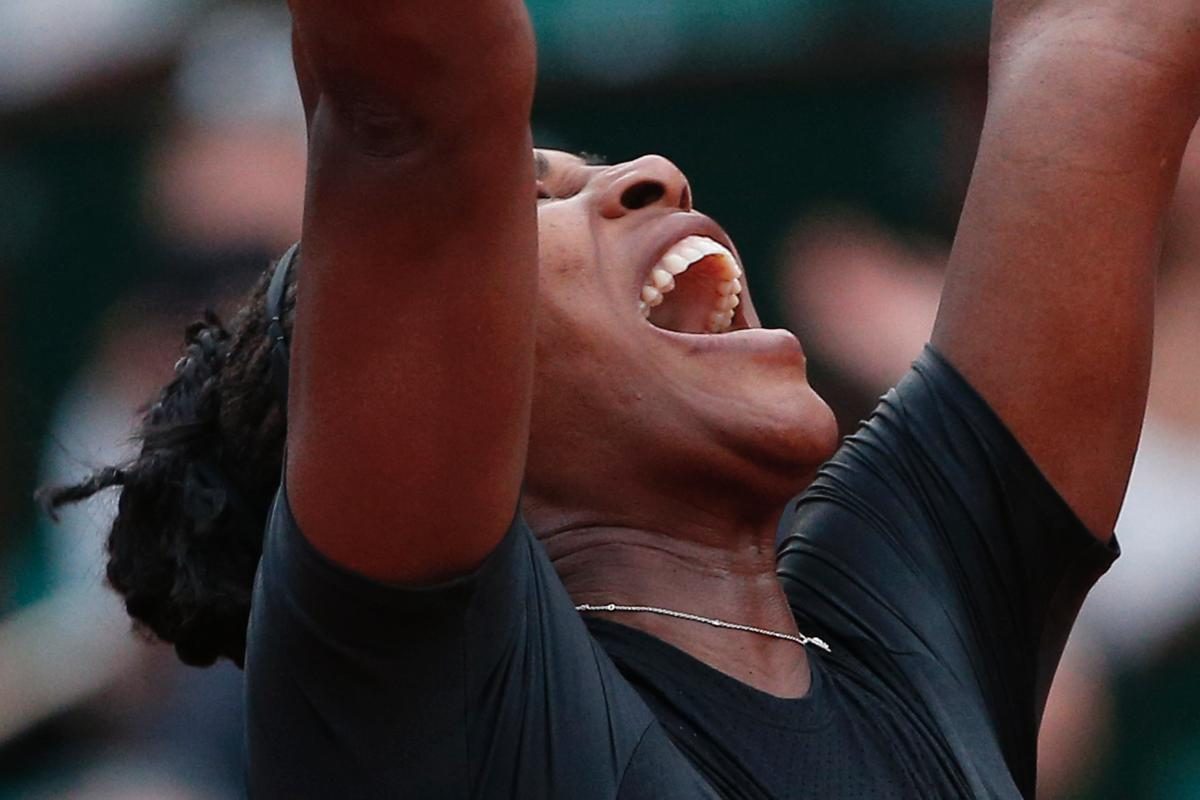 PARIS (AP) — After playing so infrequently, it’s as if Serena Williams is starting from scratch. Sure looked that way for a bit more than a half-hour in the French Open’s second round on Thursday, when she dealt with muscle soreness, a lack of verve and a bunch of mistakes. So many mistakes. And then, suddenly, after unleashing one particularly powerful backhand return winner that she punctuated with a shout, Williams was back. She was animated. Determined. Dominant, even. Shaking off some rust in her first Grand Slam tournament since giving birth nine months ago, Williams recalibrated her shots and erased a deficit of a set and a break to beat 17th-seeded Ashleigh Barty of Australia 3-6, 6-3, 6-4 in a match that ended shortly before dusk. “I lost the first set, and I thought, ‘I’ve got to try harder. I’ve got to just try harder,’ she told the crowd afterward. “And Serena came out.” Well put. Williams had all sorts of trouble in the opening set, compiling 12 unforced errors. By the time the second set was merely one game old, she had been broken twice in the match, each time at love, a rather surprising development for the owner of one of her sport’s most dangerous serves. Her coach, Patrick Mouratoglou, attributed much of the poor start to this outing coming about 48 hours after the first match of her comeback following a two-month break. She arrived in Paris having played only four matches all season — none on the red clay used at Roland Garros, and none at a major tournament since she won her 23rd such title at the Australian Open in January 2017, while pregnant. “She had no energy. She was struggling to move,” Mouratoglou said, adding that he had hoped for rain to postpone the match against Barty until Thursday. “She was struggling to use her legs on the serve and she was making much too many mistakes.” And then? “This ability to turn a match around and suddenly be like a superhero, basically — she’s normal and suddenly, Poom!” he said, snapping fingers on both hands. “Something happens, and she transforms into someone who’s almost unreachable at the level she gets to. This is something she’s always had. It’s really special, but that’s also why she is who she is.” Williams started yelling and pumping her fist after pretty much every point that went her way. It woke up Williams’ game. Might have startled Barty, too. As big a hitter as Barty is in her own right, she is hardly in Williams’ class — who is? — and never has been past the third round at a major tournament. The 36-year-old American, who became a mother on Sept. 1, grabbed four consecutive games over a span of less than 15 minutes to lead 4-1 in the second set, which soon enough would be hers. She gained control of the third almost immediately, breaking to go ahead 2-1, then holding for 3-1. After only three winners in the first set, she had 25 the rest of the way. “When push came to shove, the real Serena came out. And that’s one of her best assets: When her back is against the wall, the best comes out,” Barty said. “And that happened early in the second, and early in the third again.” When Williams served out the victory with a backhand winner down the line, she raised both arms. In the stands, Mouratoglou, shook his fist. “I felt like it’s been a long way and a long journey, and I’m still getting there, you know. But I have been working really hard, for a really long time,” said Williams, who is ranked 451st, 450 spots below her career high. “I just am hoping that every day I’m out there, every match I’m out there … it will come together.” Next for Williams is a third-round match against 11th-seeded Julia Goerges of Germany. Get through that, and Williams would face either five-time major champion Maria Sharapova or 2016 U.S. Open runner-up Karolina Pliskova. Williams beat Pliskova’s twin sister, Kristyna, in the first round in Paris. There were, to be sure, plenty of other big names in action Wednesday, including victories for Sharapova, No. 1-ranked Simona Halep and 10-time men’s champion Rafael Nadal. AP Photo/Thibault Camus