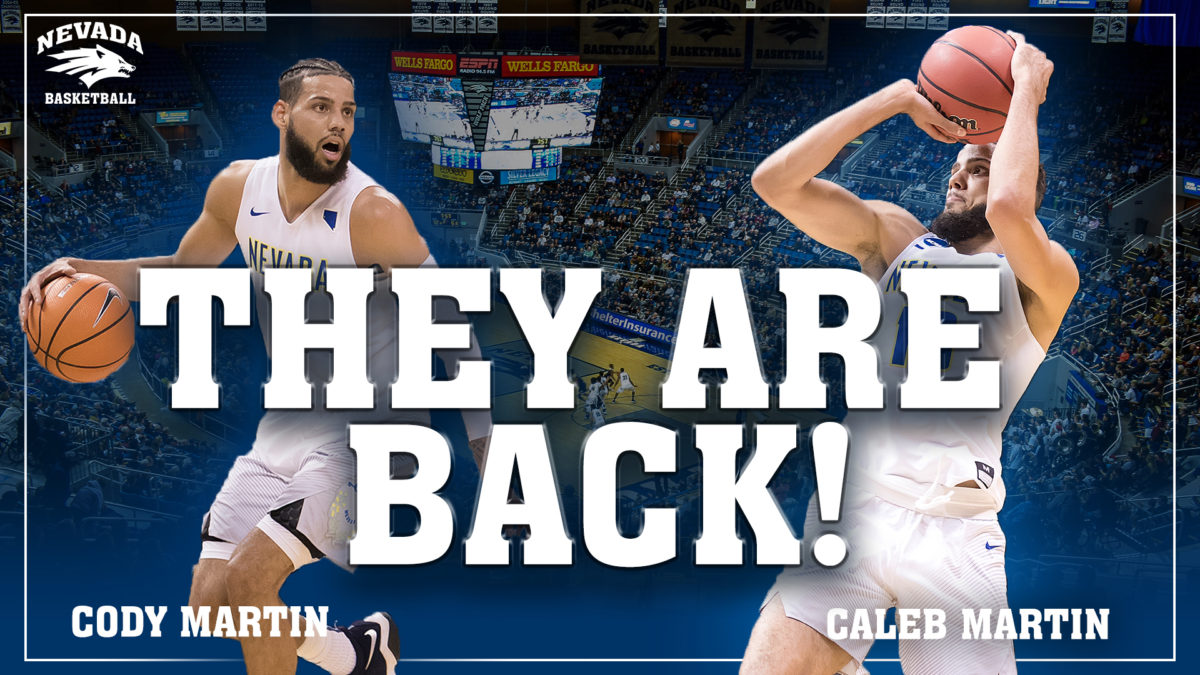 Twins Caleb and Cody Martin have withdrawn their names from NBA draft consideration and will return to play their senior seasons for the Wolf Pack in 2018-19, the school announced. Both participated in the NBA Draft Combine and had several workouts with NBA teams but have chosen to return after testing the draft process. “We are extremely excited for the opportunity to coach Cody and Caleb during their senior years,” Nevada head coach Eric Musselman said.  “They were able to go through the NBA draft process and gain valuable feedback on ways to improve their individual skill sets to play at the next level, which they are very capable of doing. This experience will benefit both of them moving into the off-season.” The twins were an integral part of the Wolf Pack reaching the Sweet 16 this past season after incredible comeback wins over Texas and Cincinnati.  They helped the Pack capture a second Mountain West regular season title and reach the NCAA Tournament for a second consecutive season.  The 2017-18 team tied the school record winning 29 games and finished the year 29-8. Caleb was the 2018 Mountain West Player of the Year and USBWA District VIII Player of the Year after leading the Pack in scoring at 18.9 points per game.  He also averaged 5.4 rebounds, 2.6 assists and 1.3 steals per game.  From the field he shot 45.4 percent and 40.3 percent from behind the arc. As a junior Caleb earned Associated Press honorable mention All-America and Lute Olson All-America team honors.  He was a first-team All-MW selection, first-team NABC District 17 selection and USBWA District VIII team honoree. Cody was the MW Defensive Player of the Year in his junior season.  He was third on the team averaging 14 points per game and second grabbing 6.3 rebounds per contest.  The 6-7 versatile player led the Pack averaging 4.7 assists, 1.7 steals and 1.5 blocks playing 35.6 minutes per game.  From the field he shot a team-high 51.6 percent that ranked fifth in the MW.  After the season-ending injury to point guard Lindsey Drew he moved to point guard and averaged 15.8 points, 6.5 rebounds, 6.7 assists, 1.8 steals, and 1.6 blocks in the final 10 games of the season.  He was named to the MW second team and to the MW Defensive team. At Utah State he scored 30 points which tied Kendall Stephens or the high-point game this past season.  His four double-doubles in points and rebounds was second on the team. (Release via Nevada Athletics) Follow Adam Zagoria on Twitter And like ZAGS on Facebook