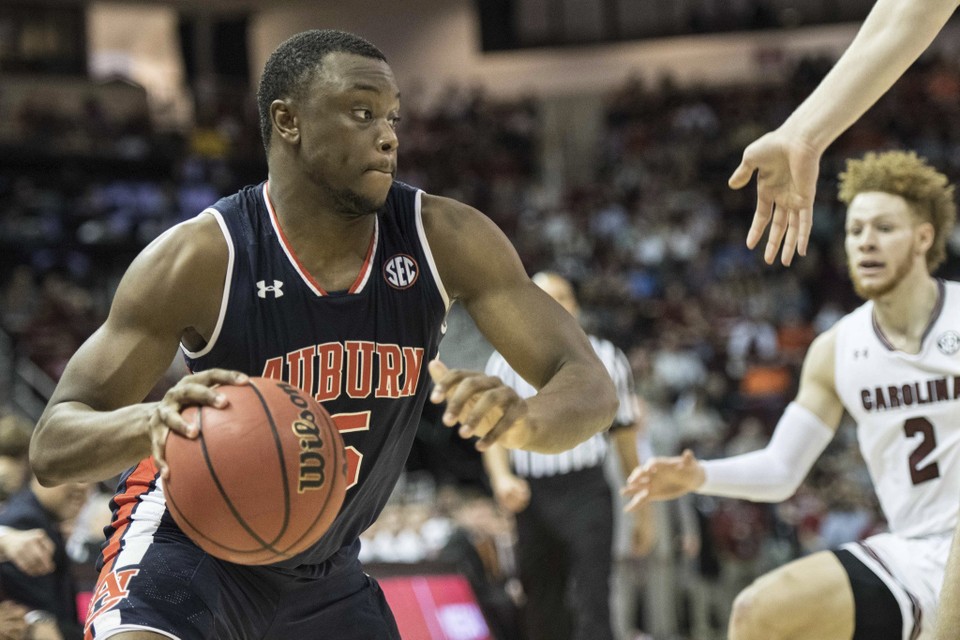 By ADAM ZAGORIA Auburn’s Mustapha Heron will withdraw from the NBA Draft and transfer to a school closer to his ailing mother who suffered a massive concussion, his father told ZAGSBLOG on Tuesday. The 6-foot-5 Waterbury, Conn., native was testing the NBA Draft waters without an agent and worked out for the Brooklyn Nets and Cleveland Cavaliers. He has opted to withdraw from the draft but transfer from Auburn in order to be closer to his mother, Thalia Heron, who lives in West Haven, Conn. “What people don’t know is Mustapha’s mom has been sick for a year,” Bryan Heron said Tuesday by phone. “Being home, he wants to get closer to his mom. He knew he had to go back to school. The last month he’s been here and he wants to be close to his mom, where she can see him play.” Heron will apply for a hardship waiver to be immediately eligible for the 2018-19 season at his new school. “He’s going to apply for it, but if he doesn’t get it, it is what it is after that,” Bryan said, adding that Thalia has had 30 doctors appointments and five emergency room visits in the last year. “But he definitely wants to be where he can see his mom on the regular.” Heron averaged 16.4 points and 5.3 rebounds last season as a sophomore. ZAGSBLOG reported a year ago that Heron was considering transferring, but after weighing his options he chose to return for his sophomore season. As for the NBA workouts, Heron previously told ZAGSBLOG: “I think it will definitely help me. I’m just enjoying it right now, trying to have fun, trying to get better. This has been something I’ve always dreamed of as a kid, being able to work out in front of NBA GMs.” AUBURN’S WILEY WITHDRAWS FROM DRAFT Auburn also got a dose of good news on Tuesday when 6-11 big man Austin Wiley announced he would withdraw from the NBA Draft and return to school for his junior season. “I’d like to thank the Auburn Family for the support, as well as my coaches and teammates for an incredible season,” wrote Wiley, who averaged 8.8 points and 4.7 rebounds during the 2016-17 season before missing the 2017-18 campaign because of eligibility issues. “I’m happy to be back. It’s time to get to work.” Auburn coach Bruce Pearl will lose Heron but is pleased to have Wiley back. “I’m really excited to have a chance to coach Austin again this season,” Auburn coach Bruce Pearl said in a statement via SECCountry.com. “He has a chance to be one of the most dominant big men in college basketball this season. He’s such a great kid and a hard worker. All of his dreams for greatness at Auburn and beyond are still alive and well. I also want to thank the Auburn Family for their patience and the support of Austin and his family during this past season.” ESPN’s Jeff Goodman and FanRag’s Jon Rothstein frist reported the Wiley news. Wiley is currently projected as the No. 54 pick in 2019, per ESPN.com.

Welcome back, @__Austinwiley50! The big man has withdrawn his name from the NBA Draft and will return to The Plains for the 2018-19 season.