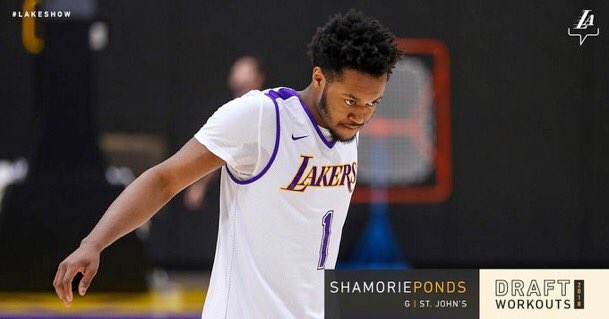 By ADAM ZAGORIA Chris Mullin isn’t the only person connected to St. John’s on the West Coast these days. While Mullin has been featured in The New York Times watching the Golden State Warriors with his fellow “Run TMC” members, St. John’s guard Shamorie Ponds is out West working out for several teams. As he continues to test the NBA Draft waters leading up to the May 30 for underclassmen to withdraw and return to school, Ponds has worked out for the Nuggets and Lakers and is slated to be at the Jazz on Wednesday and then the Pistons. The Jazz workout will also include Keita Bates-Diop (Ohio State), Chimezie Metu (USC), P.J. Washington (Kentucky), Mustapha Heron (Auburn) and Matt Mobley (St. Bonaventure). Ponds worked out with the Nets and Cavaliers before the NBA Combine, for which he was snubbed. The Haggerty Award winner as the best player in the New York-Metropolitan area, Ponds averaged 21.6 points, 5.0 rebounds and 4.7 assists as a sophomore but did not receive a Combine invite.

? St. John’s guard Shamorie Ponds discusses his defensive abilities, and some of the upset wins he was a part of this season pic.twitter.com/ziMCTrW3QU

At the Lakers workout, Ponds was asked about his team’s wins last season over eventual NCAA champion Villanova, Duke and Marquette. “That whole week was an exciting week because we was winning every game, we had a buzz,” he said. “So it was a great run.” Ponds also met with Kobe Bryant at the Lakers workout. “He said, ‘Coming in you’re not going to be able to take 25 shots so just come in and do something you’re great at,'” Ponds said. Ponds was snubbed by the Combine and had a Twitter exchange with Kyle Kuzma of the Lakers about it. “It definitely adds more fuel to the fire, I feel I definitely should’ve been there,” he said. “But can’t do nothing about it now, except showing it in the workouts.” Ponds has until May 30 to decide to return to St. John’s. “I definitely have to take advantage of this opportunity given,” he recently told ZAGSBLOG. “I just can’t make a decision right now, so I’m going to weigh it out.” If he opts to return to St. John’s, he believes this will help him next season and during the 2019 NBA Draft process. “This helps me definitely I think a lot,” he said. “I’m now on the NBA radar and next year I should be projected if I have a solid year better than where I’m projected right now.”
Follow Adam Zagoria on Twitter
And Like ZAGS on Facebook