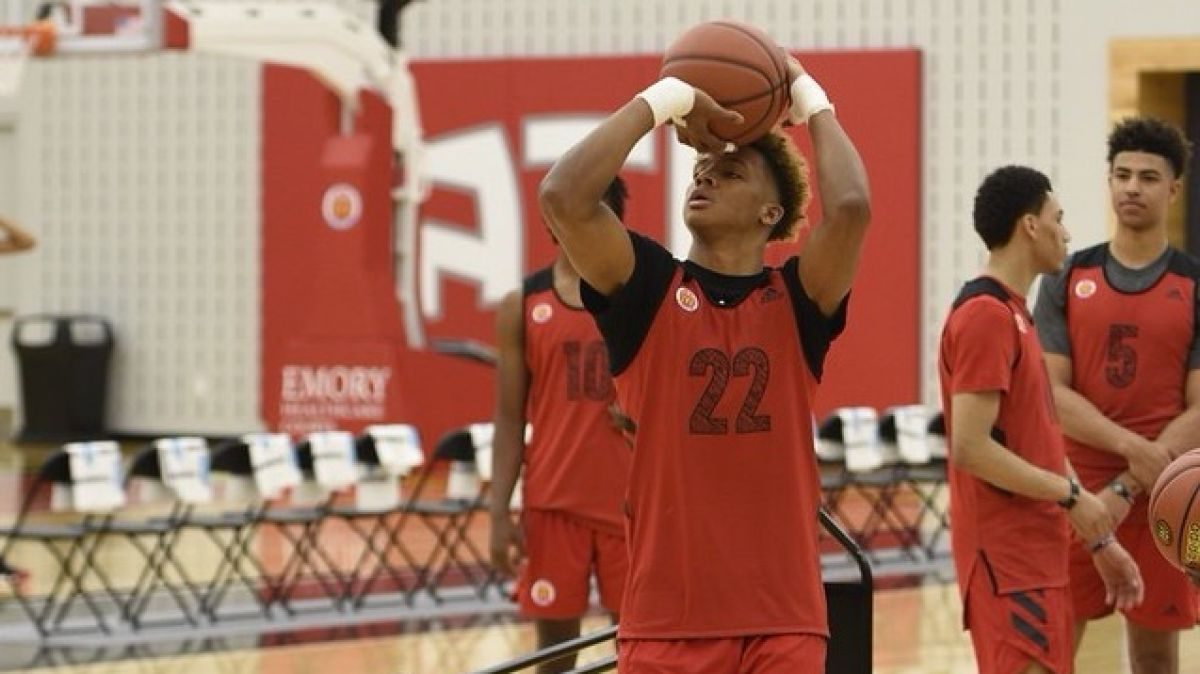 By ADAM ZAGORIA Hundreds of die-hard Indiana University basketball fans began lining up outside New Albany High School hours before the state’s most talented high school player was set to announce his college choice on Monday night. Romeo Langford, the 6-foot-6 shooting guard ranked as the No. 5 player in the 2018 ESPN 100, did not disappoint them. In front of 85 media members and more than 10,000 viewers watching on an Indy Star LiveStream, Langford announced for Indiana over Kansas and Vanderbilt, thrilling all the red-clad Hoosier fans in attendance. “I will be continuing my education and basketball career at….” he said before donning a red Indiana baseball cap as the fans erupted in applause.

“I like coach [Archie] Miller,” Langford told FloHoops.com at the recent Jordan Brand Classic in Brooklyn. “He gets the best out of his players and he proved that this year. Even though they weren’t that good of a team, having the best season, he got them ready for big games like Duke and stuff like that. And then they also got coach [Ed] Schilling. His individual development over the summer with guards, his resume says it all. He sent so many guys to the NBA when he was at UCLA. So those two are reasons I like Indiana.” At UCLA, Schilling helped the Bruins’ program send seven players to the NBA. In the summer of 2015, Kevon Looney and Norman Powell were selected in the NBA Draft. Five players from UCLA’s team in 2013-14 ended up competing in the NBA – Jordan Adams, Kyle Anderson, Zach LaVine, David Wear and Travis Wear.  In 2017, All-American guard Lonzo Ball and forward T.J. Leaf are projected to be first round picks.

Langford doesn’t figure to be at Indiana long. He’s the projected No. 5 pick in the 2019 NBA Draft, per ESPN.com. “He’s a first-rounder for sure,” one NBA executive said. “He needs a more consistent 3-point game as well as to improve his mid-range game off of the dribble. He’s a good athlete who can be explosive in the open court. He’s better than [Hamidou] Diallo of Kentucky.” Said a second NBA scout: “Langford shows a lot of talent, athleticism and skill. He has as much potential as anyone in his class. We need to see him play aggressively on offense as he seems to take a back seat in the big events NBA scouts have attended. And he needs to continue to stay locked in on the defensive end where he has the potential to be a lock-down defender but appears to be OK with being one of those guys that use the excuse, ‘But I have to use so much energy carrying my team offensively.'”

As for Indiana, this represents a major recruiting coup for Miller heading into his second season at the helm. “Getting the elite player from your state, that’s what a state University is supposed to do,” longtime recruiting expert Tom Konchalski said. “And certainly at Indiana that’s quite a tradition that IU would get the best player in state. Certainly it would be landmark recruit for them.” Miller said last fall his goal was to secure the top talent in Indiana, and no one is a bigger star there than Langford, who scored 3,002 career points, won a state championship and finished 100-10. He was selected for the McDonald’s All-American Game, the Jordan Brand Classic and the Nike Hoop Summit. “Recruiting at Indiana starts and stops with the state, and then it kinds of moves itself out,” Miller told me in the fall just before Langford’s official visit in this Indy Star story. “We’ve always operated that distance from home is a great factor in deciding. There’s unbelievable players within a 3- to 4-hour radius of IU, and once we get them to campus the place really sells itself. It’s an unbelievable place to represent, so I think as time goes forward we’ll continue to stay with that philosophy and trying to get guys that can do what we’re asking them to do and can play for our coaching staff and fit into our style.” Langford joins a 2018 recruiting class that includes point guard Robert Phinisee, small forwards Jerome Hunter and Damezi Anderson, Jr., and power forward Jake Forrester. “He is this generation’s Oscar Robertson or Damon Bailey, he’s a McDonald’s All American and now, he’s our first Indiana Mr. Basketball,” New Albany coach Jim Shannon said. With Langford’s commitment, only Jordan Brown and Brandon Williams remain among Top 50 players who have yet to announce their college plans. Williams will announce Saturday.
Follow Adam Zagoria on Twitter
And Like ZAGS on Facebook