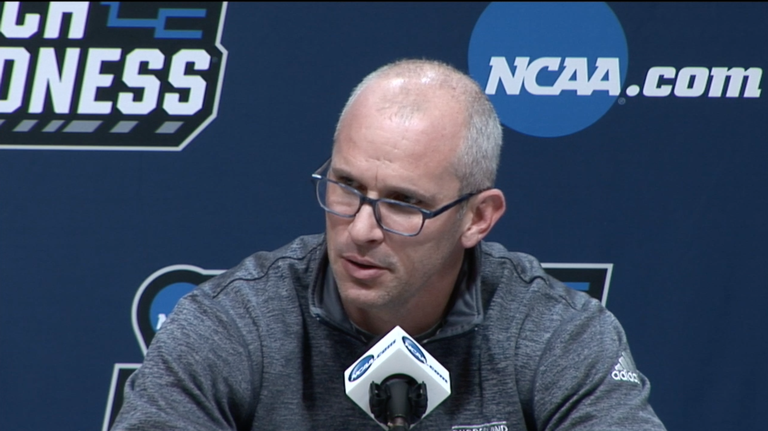 By ADAM ZAGORIA Throughout his coaching career, UConn’s Dan Hurley has worn gear from every major apparel brand. When he first began as a coach at St. Benedict’s Prep in 2001, his team was sponsored by and1. From there, as the Gray Bees became a national power producing high-major Division 1 players, St. Benedict’s transitioned to Reebok and later to Nike. Hurley then wore Under Armour during his two years as head coach at Wagner, and then donned Adidas during his six years at Rhode Island. Now he’s back with the Swoosh after taking over at UConn. “I don’t think there’s a coach that’s been in more sneaker [stuff] the last 12 years than me,” Hurley told SNY.tv by phone. This weekend he will hit recruiting events on the Nike, Under Armour and Adidas circuits, but he’s still transitioning to UConn Nike gear that he’s comfortable with after wearing Adidas for the last six years. “Basically my whole wardrobe went to my friends, family, good will,” he joked of all the Rhode Island gear. Nike Elite has shipped him all kinds of new gear, but he’s still sorting through all the sizes to make sure his clothes and sneakers fit correctly. “Every company’s sizing is different,” he said. “I finally figured out my Adidas sizing and now I gotta start over. You need time to put together your wardrobe. I look like I’m half getting my stuff from the book store.” FOR MORE ON UCONN: **Dan Hurley revving up recruiting at UConn **For more on Hurley’s journey from St. Benedict’s Prep to UConn, click here.
Follow Adam Zagoria on Twitter
And Like ZAGS on Facebook