UCLA to part ways with David Grace, who brought in many top recruits | Zagsblog
Follow @adamzagoria

UCLA to part ways with David Grace, who brought in many top recruits 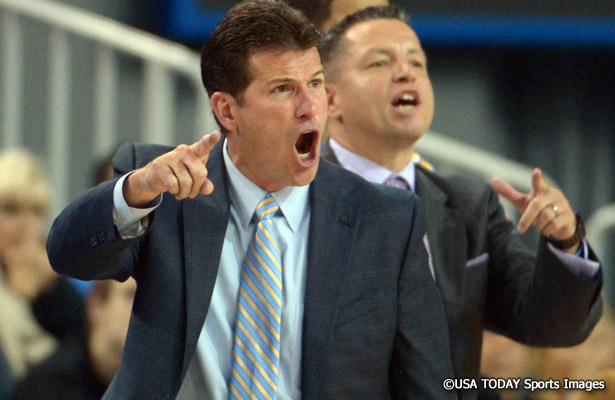 ***UPDATE 4/16: UCLA officially announced hiring of Murry Bartow as an assistant coach. “I’ve been around Murry for a long time, and he’s someone who I really respect and admire,” UCLA coach Steve Alford said in a release. “He comes from a basketball family, he has a solid coaching pedigree and he has developed a really good understanding of the game. I’m excited to add Murry to our coaching staff, and I know that he’s thrilled to be back in Westwood. He has always been very fond of UCLA, having been around the program at a young age when his dad was the head coach. We have a big offseason ahead of us, and I know that Murry will play a major role in helping our guys get better every day.”   By ADAM ZAGORIA UCLA is expected to part ways with assistant coach David Grace when his contract runs out in June and replace him with former UAB and East Tennessee State head coach Murry Bartow. UCLA head coach Steve Alford informed Grace of the change about a week before the Final Four, Grace told ZAGSBLOG. “[Alford] said that [UCLA AD] Dan [Guerrero] wanted to make the change and the next day I talked to Dan and Dan said he never told him to make a coaching change, so I don’t know where that came from,” Grace told the Los Angeles Times. “But [Alford] never said I had any deficiencies anywhere; in fact, he said I did a great job.” Grace is still listed on the UCLA website as being on the staff, and a school spokesman did not immediately respond to an email seeking comment. Alford told the Times there had not been any movement on his staff as of yet. “That, I don’t know,” Alford told the paper. “Obviously, I just want the best for my staff and if they can advance in what they do then I’m always behind them 100% on that.” Since joining Alford’s staff in 2013, Grace has been responsible for a steady stream of elite recruits coming to UCLA, including Lonzo Ball, T.J. Leaf, Kevon Looney, Shareef O’Neal, Kris Wilkes, Jaylen Hands, Jalen Hill and Cody Riley, as Aaron Torres of The Athletic pointed out. Alford is expected to retain assistants Duane Broussard, who has been with him for a decade, and Tyus Edney, a UCLA legend. Alford is 117-57 (.657) in five seasons at UCLA, with four NCAA Tournament appearances, including three Sweet 16s. His contract runs through 2020-21. Grace, who was in the mix for the Fresno State job, shouldn’t be out of work long and has already begun fielding calls from suitors. He told the Times his parting with UCLA had nothing to do with the FBI investigation into college basketball.
“I’m going to get a letter from UCLA stating that it had nothing to do with it,” Grace said. “If you notice, out of all the Adidas schools and the [non]-Adidas schools, we’re the only one that [wasn’t] implicated and it’s because I don’t do that and we don’t do that. … My 20 years of experience in the Air Force and all that, I have great integrity in what I do.”
ESPN’s Jeff Goodman first reported the news on Twitter.   Photo: Basketball Insiders
Follow Adam Zagoria on Twitter
And Like ZAGS on Facebook