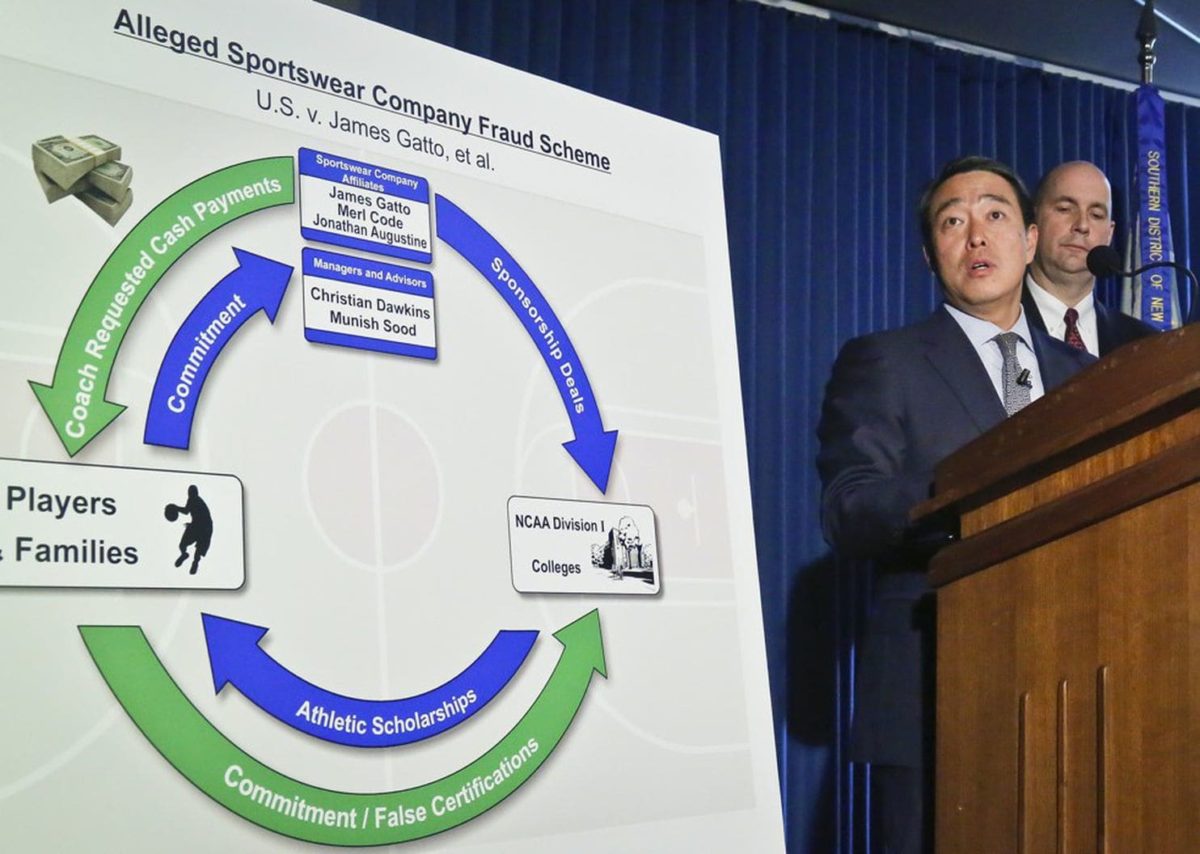 By ADAM ZAGORIA The college basketball season officially ended when Villanova beat Michigan in the national championship game last Monday in San Antonio. But the hits keep on coming for the sport during the offseason. Robert S. Khuzami, the Attorney for the United States, on Tuesday announced the filing of a Superseding Indictment against defendants James “Jim” Gatto, Merl Code, and Christian Dawkins in United States v. Gatto.  The Superseding Indictment expands the scope of the charged wire fraud conspiracy to include alleged payments to the families of six student-athletes in connection with those players’ decisions to attend four schools – Louisville, Miami, Kansas, and North Carolina State  – all of which were sponsored by Adidas. The new information in the indictment pertains to Kansas and N.C. State, while the information about Louisville and Miami is essentially a recycling of the initial charges announced last September. The indictment says Adidas, via a consultant identified as “CC-3,” arranged for the parent of a Kansas player to be paid $90,000 and the parent of an N.C. State player $40,000 for their commitments to the schools. Marc Tracy and Joe Drape of The New York Times identified “CC-3” as T.J. Gassnola, formerly of the New England Playaz AAU program. In February, after the Yahoo report came out mentioning Gassnola, he declined comment to ZAGSBLOG. The N.C. State player identified in the charges appears to be current Dallas Mavericks guard Dennis Smith Jr., who spent one year with the Wolfpack before entering the NBA Draft. The charges allege Gatto “illicitly funneled approximately $40,000 from Adidas to the father of a player who committed to N.C. State “in or around September 2015.” Smith committed to N.C. State on Sept. 10, 2015 before enrolling in January 2016. The charges say the player in question “entered the NBA Draft in June 2017.” Smith was the No. 9 pick in the draft last year.

In March, N.C. State released an FBI subpoena requesting information regarding Smith and former coach Mark Gottfried, who was fired in 2017 and is now the Cal-State Northridge coach. The 5-page subpoena, published by the Raleigh News & Observer, requested “all documents regarding the recruitment and enrollment” of Smith. In terms of Kansas, the indictment mentions two players, one of whom committed “in or around October 2016” and one who committed Aug. 30, 2017. No players committed to Kansas in October of that year, according to the JayhawkSlant.com database, but Billy Preston committed to Kansas Nov. 6, 2016. The 6-10 Preston never ended up playing at Kansas and left the University in January of this year for a brief pro career in Bosnia. The indictment alleges Gatto “and others, known and unknown, conspired to funnel at least $90,000 from [Adidas] to the mother of a top high school basketball player. The payments were made in connection with a commitment by the student-athlete to attend the University of Kansas.” The indictment says the player’s parent was “personally delivered approximately $30,000… at a hotel room in New York, New York” by “CC-3,” or Gassnola.

Silvio de Sousa committed to Kansas on Aug. 30, 2017 and then enrolled at the semester break after spending the first semester at IMG Academy in Bradenton, Fla. The indictment mentions “another $20,000 payment” to the guardian of the player who committed Aug. 30, and says Gatto and “CC-3” discussed how reimbursement would be made.

The second Kansas player mentioned in the report committed Aug. 30, 2017 – which is when Silvio de Sousa committed. https://t.co/XwujJUCHgb

Silvio De Sousa appears to be caught in this, too.

Indictment references a “surprise” commitment decision on August 30, 2017. See the photos: Later, the indictment says that a college coach asked for $20,000 to pay the player to override a previous deal the player had made. pic.twitter.com/OL9VCrVfFe — Tom Martin (@TomKCTV5) April 10, 2018

“Earlier today, we learned that the University of Kansas is named as a victim in a federal indictment. The indictment does not suggest any wrongdoing by the university, its coaches or its staff. We will cooperate fully with investigators in this matter. Because this is an active investigation, it is not appropriate for us to comment further at this time.”

The U.S. Attorney’s Office said: “The investigation remains ongoing.  The FBI strongly encourages anyone with information they believe to be relevant to contact the FBI by calling a special hot line established to receive tips in connection with this investigation: 212-384-2135.” Photo: AP Follow Adam Zagoria on Twitter And Like ZAGS on Facebook