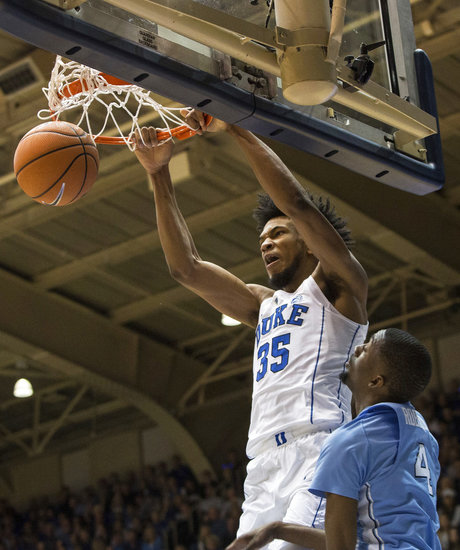 By SEAN BOCK OMAHA – Duke freshman phenom Marvin Bagley told reporters after his team’s Elite Eight loss to Kansas on Sunday that “he’s not thinking about the NBA right now.” Bagley, who had 16 points and 10 rebounds in 44 minutes in the loss, is the No. 3 pick to the Memphis Grizzlies in the latest ESPN NBA Mock Draft. “This loss is tough, especially playing in a big tournament like this. This is all that’s on my mind right now. Whatever happens after this, we’ll see. We’ll sit down talk about it and take it day by day,” Bagley added. In his first and likely only season in college, Bagley averaged 21.2 points and 11.1 rebounds while being named ACC Player and Rookie of the year. “I learned a lot of things, not only on the court but off the court,” Bagley said. “Seeing the amount of work that has to be put into this, you know, preparation-wise, studying the teams that we played all year.”
Follow Sean on Twitter
Follow Adam Zagoria on Twitter
And Like ZAGS on Facebook