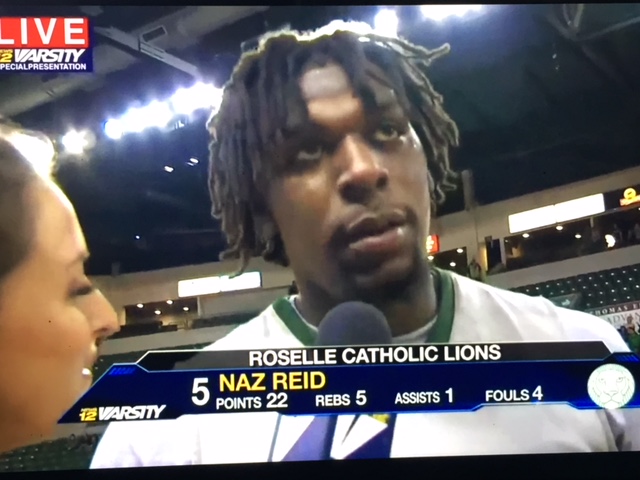 By ADAM ZAGORIA Naz Reid battled foul trouble down the stretch of his final high school game, but was on the court when it mattered most. The 6-foot-11 Louisiana State-bound big man threw the ball up in the air when the clock hit zero and he had finished with 22 points and 5 rebounds to help lead top-seeded Roselle Catholic to a 61-54 victory over No. 2 Don Bosco Prep in the New Jersey Tournament of Champions final in Trenton, N.J. Reid overcame four fouls to lead the Lions (29-4) to their third TOC title under head coach Dave Boff (2013 and ’15). He was a freshman when they won in 2015. “It’s amazing, four fouls with about three minutes left. My guys were able to pull it out for me,” Reid, who will next play in the McDonald’s All-American Game March 28 in Atlanta, told News 12. “I thank them. Those are my brothers, I love them to death. It’s an exciting feeling to have another trophy and  hopefully get another one next year.” Reid and Roselle Catholic this year won five titles — the first time that’s been done in school history. “We’ve stuck to the goals that this group has had this year,” Boff said Friday. “They wanted to be the first Roselle Catholic team to win all the championships that you can win in a season — conference, county, section, state and TOC.”

Roselle Catholic senior Alanzo Frink finished with 16 points and 4 rebounds. Rutgers-bound guard Ron Harper Jr. went off for 33 points as Don Bosco lost in the TOC final for the second straight season after falling to the Patrick School in 2017.