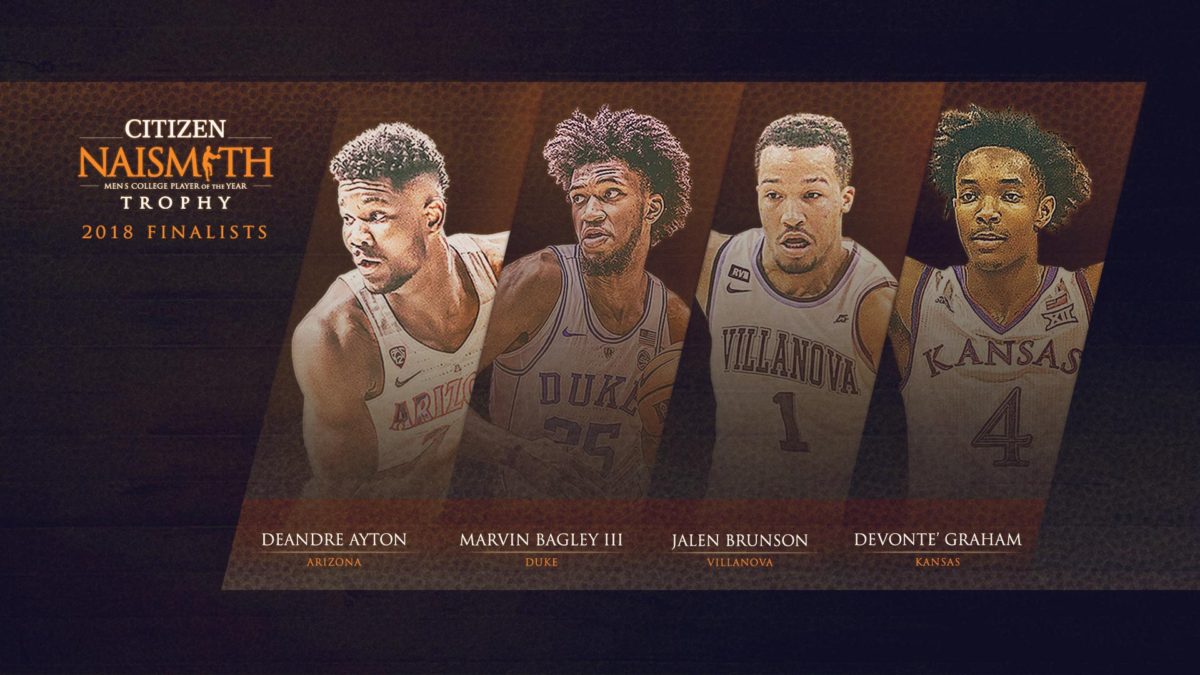 The list of finalists for the 50th presentation of the Citizen Naismith Trophy, recognizing the nation’s most outstanding men’s college basketball player, includes two freshmen and two upperclassmen, each of whom were named their respective conference Player of the Year. Deandre Ayton (University of Arizona), Marvin Bagley III (Duke University), Jalen Brunson (Villanova University) and Devonte’ Graham (University of Kansas) make up the final ballot announced today by the Atlanta Tipoff Club. Celebrating its 50th year by honoring past winners, the Citizen Naismith Trophy has been presented to 45 unique winners at 31 schools over the last 49 years, starting with its first presentation to UCLA’s Lew Alcindor, now known as Kareem Abdul-Jabbar, in 1969. In the history of the award, only two freshmen have won it—Kevin Durant (University of Texas) in 2007 and Anthony Davis (University of Kentucky) in 2012. Ayton and Bagley seek to become the third freshman to win the award, and if Bagley wins, he would join seven other players from Duke University, the school with the most Citizen Naismith Trophies. Ayton would be the first player from the Pac-12 to win the award from a school other than UCLA. For the second year in a row, Villanova University has a finalist, and Brunson would be the school’s first winner of the Citizen Naismith Trophy. The last time a junior won the award was in 2010 with Evan Turner from Ohio State. Brunson represents the sole junior on the list of finalists. Graham looks to follow in the footsteps of former teammate Frank Mason III, winner of the 49th Citizen Naismith Trophy. Graham would become only the third winner from University of Kansas following Mason and Danny Manning who won in 1988. The last time a school had back-to-back winners was Duke in 2001 (Shane Battier) and 2002 (Jay Williams). If Graham is selected, it would make the third straight winner from the Big 12, which would tie the Big Ten conference for second place with six winners apiece behind the ACC’s 16 Citizen Naismith Trophy winners. Fans will have a chance to make their mark on this celebratory season with the fan vote. Beginning March 19 and running through March 30, fans will be able to cast their vote for their favorite player by visiting naismithtrophy.com/vote to help determine the winner. The fan component makes up five percent of the overall vote. The 2018 Citizen Naismith Trophy winner will be announced on Sunday, April 1, at the Naismith Awards Brunch at Pearl Stable in San Antonio. The Naismith Awards Brunch will be simulcast on SiriusXM channel 84 and be streamed using Facebook Live through the Naismith Trophy Facebook page.
“These four finalists are competing not only for the Citizen Naismith Trophy player of the year honor, but the inclusion into an elite group of college basketball players representing 50 years,” said Eric Oberman, executive director of the Atlanta Tipoff Club. “All of these young men have unique basketball styles and attributes but are commonly linked by their on-court excellence. We wish we could choose each of these candidates as the player of the year.” “Each of these four players has displayed the talent it takes to become a Citizen Naismith Trophy award winner,” said Eric Horowitz, managing director U.S. and travel retail, Citizen Watch Company of America, Inc. “As they play in post-season, we look forward to supporting them as they continue to compete for the 50th Citizen Naismith Trophy.” About the finalists: Deandre Ayton, Freshman Marvin Bagley III, Freshmen Jalen Brunson, Junior Devonte’ Graham, Senior