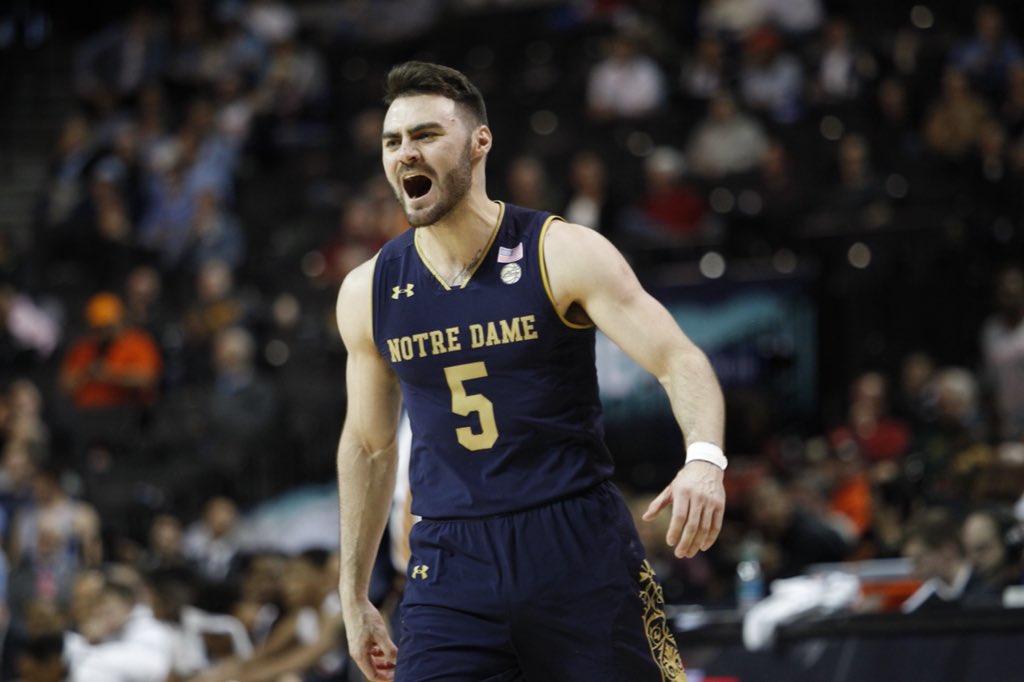 By ADAM ZAGORIA NEW YORK — Notre Dame kept their NCAA Tournament hopes alive with an epic comeback win over Virginia Tech in the ACC Tournament. Down 21 points in the second half, the No. 10-seeded Irish rallied for a 71-65 win over No. 7 Virginia Tech in the second round at Barclays Center. After outscoring the Hokies 50-31 in the second half, the Irish (20-13) will get No. 2 Duke in the quarterfinals at 7 p.m. on Thursday. “How about that one?” Irish coach Mike Brey said after his team won its second game in two days in Brooklyn. “I’ve never been prouder of a group because they were thumping us pretty hard…I don’t know if I’ve ever been prouder of a team in a game that really matters.” Asked how the win impacts his team’s NCAA Tournament chances, Brey didn’t hesitate. “I’ve never been a big guy to campaign but I really think we deserve to be in,” he said. “I don’t want to hear about the best 68. When I have my guys back we’re a Top 20 team. We have an opportunity to end all the drama tomorrow night.”

Senior guard Matt Farrell scored 17 of his game-high 22 points in the second half, and Bonzie Colson scored 10 of his 12, including a three-pointer off the window that gave Notre Dame a 60-59 lead with 1:59 left, its first of the second half. Rex Pflueger added 14 points and T.J. Gibbs 13. “The backboard’s there for a reason,” Colson joked of his three off the window. “My dad used to tell me it’s your best friend. I shot it and I looked it in. It felt good.” On the other side, Virginia Tech coach Buzz Williams said his team “disintegrated” down the stretch. “Just completely fell apart the last 15 minutes defensively,” he said. “If you give up 50 points in 15 minutes, I don’t know that as a coach I would point to offense being a problem.”

Said Chris Clarke: “I think we fell apart on defense and it translated over to our offensive game.” Justin Robinson and Justin Bibbs scored 15 apiece for the Hokies (21-11). Playing just his fourth game back after missing much of the season with a foot injury, Colson shot just 4-of-14 for the game, but he scored five straight during the time when the Irish took the lead. “I’m feeling good out there,” he said. “Just keep plugging in. Being a leader, you have to step up. This is the time when you have to make big plays.” Colson and Farrell missed the last game with Duke, an 88-66 loss on Jan. 29, due to injuries. But now they get another chance. “We got a shot,” Farrell said. “We got a shot back at them tomorrow.” Photo: ND Basketball Follow Adam Zagoria on Twitter And like ZAGS on Facebook