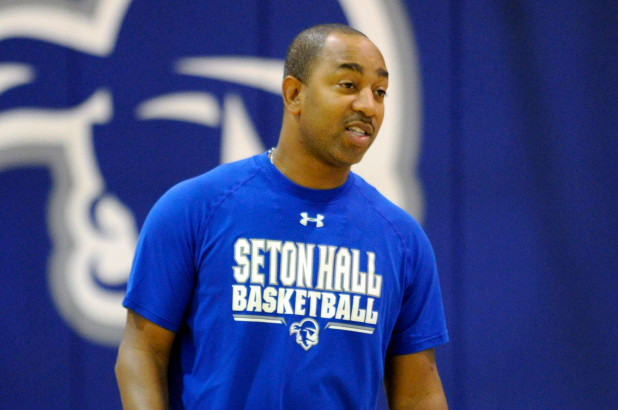 By ADAM ZAGORIA In addition to revealing a Who’s Who of big-time college programs and high-profile player names, the documents released in the latest Yahoo sports article show that multiple high-profile grassroots basketball directors or trainers associated with Adidas programs were on the payroll of an NBA agent. Desmond Eastmond, who says he’s currently a trainer with multiple programs, including the Adidas-sponsored Game Elite; T.J. Gassnola, who told ZAGSBLOG he has stepped down as the director of the New England Playaz; and Tiny Morton of the Juice All-Stars received payments from Andy Miller’s ASM Sports, the documents show. The Yahoo documents show Gassnola received $17,300 from ASM, Morton received $9,500 and Eastmond $6,000. Ironically, both Eastmond and Gassnola were previously punished in 2012 for their ties to Miller, and both of their programs were banned from participating in any NCAA-certified events for one year. Eastmond said he has “never” been a director with an Adidas-sponsored program and “stepped down” from his director status with Worldwide Renegades “after 2012” and now only serves as a trainer. Gassnola said he had no comment on why he’s mentioned in the Yahoo report. Two other AAU directors — Matt Ramker (Florida Rams) and Tony Edwards (SEBL Elite All-Stars) — were also banned from events that year (but are not named in the current Yahoo documents.) “This is Part 2, they went back and did the same freakin’ thing all over again,” one AAU director whose program is not affiliated with Adidas told ZAGSBLOG in reference to Eastmond and Gassnola. Grassroots directors have to pass an annual NCAA certification that asks, “Are you a sports agent, employed by a sports agent or have an association with a sports agent? A non scholastic coach is not an agent and should NOT check this box.” If a respondent answers yes, he or she is not allowed to coach an AAU program.

Reached by text, Eastmond said he’s “never been a program director” and added: “Racially biased attack by an institution (NCAA) with double standards who constantly violate FAIR LABOR ACTS by not paying College Athletes but yet scandalize the players and thier families without holding themselves accountable for exploiting a sport that’s predominately African American!!!!” Morton, who currently serves as the Lincoln High School coach and the 17U coach for the Juice All-Stars, did not immediately respond to a text message or pick up his phone for an interview. He famously came to Seton Hall in a package deal with Isaiah Whitehead in 2014. He also coached Desi Rodriguez, now a Seton Hall senior, at Lincoln. Morton then returned to Lincoln in 2015, while Whitehead was drafted by the Brooklyn Nets in 2016. The documents further show that as a freshman at Seton Hall, Whitehead received $26,136 from ASM. The “Pina” document, referring to agent Stephen Pina, says Whitehead received $37,657 and was “setting up payment plan.” Whitehead is now with Roc Nation. “We are aware of the Yahoo! Sports report,” Seton Hall said in a statement Friday. “We have taken steps proactively to reach out to the NCAA and the BIG EAST Conference, and while we have not been contacted by investigators, we will be conducting our own internal review.” Morton has had a long relationship with Miller, dating from Stephon Marbury to Sebastian Telfair to Lance Stephenson to Whitehead. “I’m not (Morton’s) agent,” Miller told the Daily News in 2009. “I never had that kind of relationship with Tiny.” Still, we now know Miller was paying Morton at least as of 2015, per the Yahoo documents. It remains unclear if Morton stopped taking payments from ASM while at Seton Hall. “The implication is that you have directors under contract by a shoe company, which is legal, and a sports agent, which is not legal, so they’re essentially serving two masters” the non-Adidas AAU director said. “And so the benefit for Andy Miller by paying these directors is that he can control every aspect of this kid’s life. “He can steer these guys where he wants them to go to college with who he wants them to play because then when they’re in college and they’re choosing their sports agents, that college coach is going to push Andy Miller and the AAU director is going to push Andy Miller because Andy Miller put that guy in that college.” As the Yahoo report notes, Miller was decertified as an NBA agent in the wake of the FBI investigation and has not yet been charged in the case. He is expected to cooperate with the feds. Speaking of the AAU personnel linked to the Yahoo report, the non-Adidas director said: “These guys need to get out of grassroots. These are the guys that make the people who do it the right way look like criminals. ” Photo: NY Post Follow Adam Zagoria on Twitter And like ZAGS on Facebook