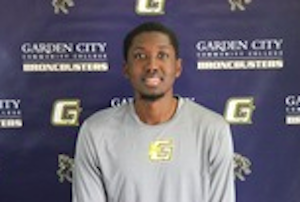 By SEAN BOCK Jeffrey Otchere, the 6-foot-11 JUCO center from Garden City (KS) Community College, is one of the fastest rising talents at the JUCO level and has over 20 Division 1 offers from schools ranging from the MAC to the A-10, including interest from high-major programs. A Bronx (NY) native, Otchere first picked up the game of basketball in 9th-grade gym class. In the 10th grade, he decided to go out for the varsity team and is now considered one of the top defensive big men in the country. After graduating high school from Christopher Columbus (NY), Otchere knew he needed to fine tune his basketball skills along with his academics if he wanted to qualify at a Division 1 school. He attended Bull City Prep (NC) for a post-grad year and picked up multiple D-1 offers including Canisius and Quinnipiac. Otchere then went on to play at Delaware State but was a Prop 48 prospect. Not wanting to stay at Delaware State, Otchere enrolled at Ranger College with former Texas A&M, Texas Tech, and Kentucky coach Billy Gillispie.  After a summer of workouts at Ranger, Otchere decided to transfer to Garden City Community College where he is among the leaders in blocks per game at the JUCO level. Kenneth Robinson, Otchere’s mentor and skills developer who has worked with the PSA Cardinals AAU program, sees comparisons with Otchere and current Texas big man Mo Bamba, who Robinson also trained and is projected to go No. 3 in ESPN’s latest NBA Mock Draft.  “He’s pretty much getting recruiting for his defensive expertise,” Robinson said of Otchere. “He’s no Mo Bamba, but he has a defensive ceiling right below Bamba.” “He has high-major potential if he can develop his offense,” Robinson added. At 6-foot-11, Otchere possesses a long 7-foot-6 wingspan, 9-foot-3 standing reach, 33-inch vertical, fast, can run the floor, slides his feet horizontally and vertically like a guard and can guard any position.  Mid-major programs have started to flock to Otchere this year as he holds offers from Iona, Fordham, Youngstown State, Santa Clara, Portland, Portland State, Kent State, UIC, New Mexico State, Utah State, Stony Brook among others and is receiving interest from Wichita State and Washington State.  Being from the Bronx, Otchere has a close connection with Fordham, and they’ve been using the location pitch. The coaching staff was in on Feb. 16 for Otchere. “It’s in the Bronx, and the A-10 gets three to four bids a year,” Robinson said. “Their pitch is they’re in a competitive conference, and it’s 10 to 15 minutes from home. A degree from Fordham is nothing to sneeze at.” Utah State was in two weeks ago and has been in constant contact with Otchere. “You’ll have matchups with New Mexico, UNLV, the Brandon McCoy’s and Chandler Hutchison’s of the world. They’re not high-major leagues, but they’re right on the cusp so you can get exposure and time to develop your game.” Portland was in to see Otchere on Feb. 12 and have also preached the prestige of some of its conference foes. “They’re in the WCC with Gonzaga, St. Mary’s, and BYU. You can be a big that can show your defensive versatility against some of these lottery type bigs.” “Somewhere I will make an impact by playing a lot,” Otchere said of what he’s looking for in a school. “Their staff believes in me, and they see the potential of what I can be and work with me to achieve it. It doesn’t matter where it is, but they have good player development to get me better. Good and experienced staff in general ranging from coaching staff to strength and conditioning staff. Coaches that will tell you the truth and not just let you know what you want to hear. I also like to see their alumni and where they are at now.” As of now, Otchere hasn’t trimmed his list and is keeping his options open. In March, he’ll try and cut it down to five schools and is looking to make a decision in April or May. Otchere will have three years of eligibility left when he enrolls in a division one program in the fall. Photo: Garden City CC
Follow Sean on Twitter
Follow Adam Zagoria on Twitter
And Like ZAGS on Facebook