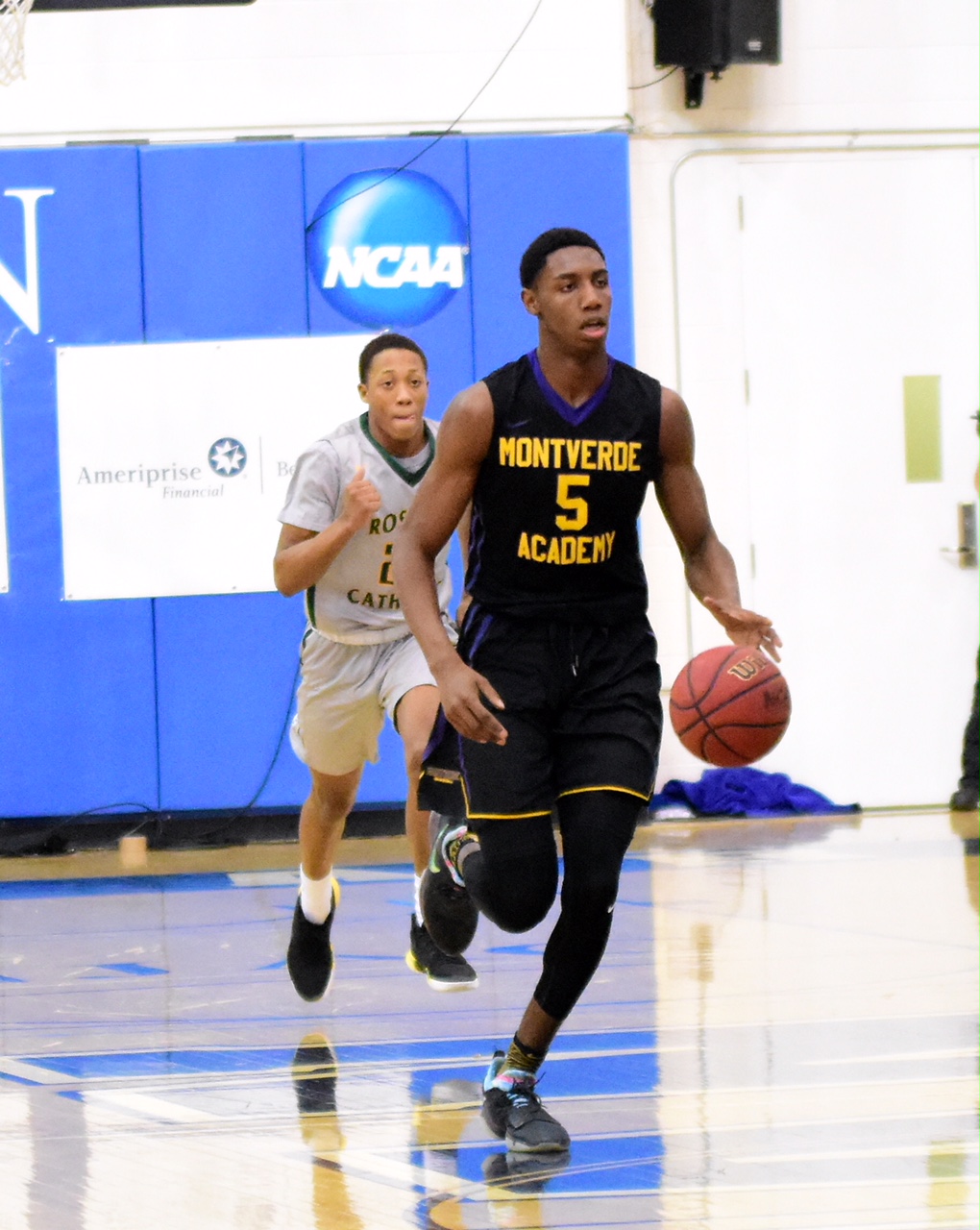 By ADAM ZAGORIA UNION, N.J. — When R.J. Barrett and his Montverde (FL) Academy teammates raced out to a 12-2 lead on Roselle Catholic in the Metro Classic at Kean University, it looked like they might land the knockout punch in the first quarter. But by the time LSU-bound Naz Reid put the Lions up six points with a pair of free throws with 28.4 seconds remaining, it appeared to the packed crowd of 2,500 at Harwood Arena that Roselle Catholic, ranked No. 21 by USA Today, would pull the upset of the No. 1 high school team in the nation. But Roselle Catholic began celebrating a bit too early, committed several costly turnovers in the final seconds and Barrett scored his team’s final 7 points — five from the foul line and two on a breakaway left-handed layup — as Montverde emerged with a dramatic 60-59 victory that kept them unbeaten on the season (30-0).

The win enabled legendary coach Kevin Boyle, who won five New Jersey Tournament of Champions titles at St. Patrick’s, to emerge with the win in the first of three games in the Garden State this weekend. “I mean, we should’ve won by more,” the 6-foot-7 Barrett, the projected No. 1 pick in the 2019 NBA Draft, told me after scoring 18 of his game-high 20 points in the second half. “We’re the better team. but it’s a tough team. They’re playing in front of their home crowd and we had to win this one for Coach Boyle.” Barrett seemed bothered by the physicality and defense of Roselle Catholic. At one point, the 6-foot-11 Reid walked past Barrett during a stoppage and bumped him as they crossed paths. Barrett had just six points after three quarters and Roselle Catholic stretched the lead to 52-45 midway through the fourth. “He didn’t play his normal game,” Boyle told me. “We have traveled a lot, not to make excuses, but our energy level wasn’t where it should be. To Roselle Catholic’s credit, they played with really good passion and good energy, so coach [Dave Boff] did a good job with them. And our guys made a great comeback, they didn’t quit.” Barrett hit four straight foul shots to trim the lead to 54-51. With his team trailing 59-53 with 28.4 seconds left, he scored the game’s final seven points — five from the line — as RC committed one turnover after another under strong press pressure from Montverde. “I just competed,” Barrett said. “I was terrible in the first half, I was sleeping. But just my competitive nature kicked in in the second half.” Said Boff: “I mean he’s a great player, obviously. He’s National Player of the Year, I would imagine, and we kept him under wraps, I thought we did a good job against. He got free a little bit at the end. The reality is that as well as he played down the stretch, we still had the game in our hands and we needed one more play and one more free throw and we didn’t get it.”

Boyle, who has coached five top-3 draft picks in Kyrie Irving, Ben Simmons, Michael Kidd-Gilchrist, D’Angelo Russell and Joel Embiid, said Barrett is another special player in that line. “I think the great players, even when they don’t play their best, play their best when the game’s on the line,” Boyle said. “So again, he picked it up at the key moments, made the big steal, the big and-one and the rest is history.” Barrett is part of the No. 1 recruiting class in the nation, a class that includes the top three players in the Class of 2018 in Barrett, Zion Williamson and Cam Reddish, as well as point guard Tre Jones. Barrett’s AAU coach, Dwayne Washington of UPlay Canada, said Duke will be the Golden State Warriors of college basketball next year. Barrett doesn’t disagree. “We play three different positions and then we got Tre Jones as our point guard, it’s going to be tough to stop us,” Barrett told me. For RC, junior Josh Pierre-Louis was outstanding with 17 points, while the 6-11 Reid played point guard for much of the night and finished with nine points, nine rebounds and two steals. Delaware-bound guard Ithiel Horton had 12 points. Uncommitted junior wing Kahlil Whitney had just five points, but this two-handed dunk might’ve been the highlight of the night.

Barrett and Montverde must turn around and face Gill St. Bernard on Saturday afternoon before taking on Christ the King on Sunday. CTK is coming off a 61-58 win over rival Archbishop Molloy on Friday night at Molloy. FREE THROWS St. John’s assistant Matt Abdelmassih was on hand for Whitney and Montverde prep forward Josh Roberts, a Class of 2018 St. John’s signee who did not play because of illness. After St. John’s plays Marquette on Saturday, Abdelmassih plans to watch the game between the Patrick School and St. Benedict’s Prep at the Primetime Shootout. The Red Storm are recruiting Class of 2019 guys Precious Achiuwa and Lester Quinones of St. Ben’s…Maryland assistant Kevin Broadus watched 2019 Terps commit Makhi Mitchell score nine points, including a big second-half dunk. Maryland is also involved for 6-9 uncommitted Class of 2018 Roselle Catholic forward Alanzo Frink, who recently added an offer from St. Bonaventure….Assistants from Monmouth and FDU were also on hand.   Photo: Mustafa Hooten
Follow Adam Zagoria on Twitter
And Like ZAGS on Facebook

No. 21 North Carolina uses fiery second-half run to rally past No. 9 Duke in rivalry game

After brutal loss to Montverde, Roselle Catholic must now focus on County and State tournaments