Northwestern's Bryant McIntosh: 'We thought it was going to be a lot easier' | Zagsblog
Follow @adamzagoria

Northwestern’s Bryant McIntosh: ‘We thought it was going to be a lot easier’ 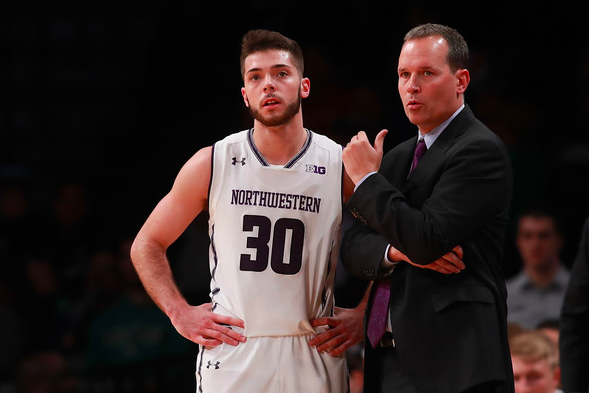 By SEAN BOCK After making the NCAA Tournament for the first time in program history last year, Northwestern returned almost everyone from that team and were expected to be even better in the 2017-’18 season. Instead, the Wildcats find themselves at 13-10 and 4-6 in Big Ten play. Barring an unforeseen miracle in the regular season and Big Ten Tournament, head coach Chris Collins‘ team will not be making it’s second straight trip to the Big Dance, which is disappointing considering the expectations coming into the year. Frustration has started to mount in Evanston. “I kind of knew we weren’t ready,” senior point guard Bryant McIntosh told the Chicago Sun-Times. “We weren’t really prepared to play a good team. We weren’t mentally ready. I don’t think we were in shape physically. I’m still not sure we’re even really in shape now.” Last year, Northwestern had only lost one game by double digits at this point – at No. 23 Purdue – and only suffered three losses by double figures all season. This year, the Wildcats average margin of defeat is 15.1 which includes a 36-point whopping from Texas Tech on Nov. 19. “Guys were working hard, but you can always notice when there’s an edge to a team,” Collins said. “There’s an edge to their workouts, when they’re lifting weights, when they’re shooting, when they’re practicing. Our guys were working, but we didn’t have that same edge. We didn’t have that same hunger that I had seen the previous couple years.” “At the end of the day, I take responsibility for it. I told them, but I wasn’t as strong as I needed to be with it. I would love to go back and have a heavier hand with those guys and force them [to change].” Next year, three of Northwestern’s key players this season – McIntosh, Scottie Lindsey, and Gavin Skelley – will have graduated leaving now-junior forward Vic Law – the Wildcats’ third-leading scorer – with a young and inexperienced team, which could mean another sub-par season for the program. “We thought it was going to be a lot easier,” McIntosh said. “It’s been a really tough season. I’m disappointed in how we handled it. It hurts. There’s definitely a lot of regret.” Granted, Northwestern wasn’t able to play at its usual home – Welsh-Ryan Arena – this year due to the renovations which are scheduled to be completed by the Fall of 2018, but that’s not a valid excuse to justify how the ‘Cats have played this season. “We went from everybody’s lovable losers to, all of the sudden, everywhere guys went, we’re getting praised, we’re being told everyone’s coming back, we’re going to be great again, we’re going to be even better,” Collins said. “We just fell into all the human-nature things that are normal.” On the bright side, Northwestern brings in its best-recruiting class in school history which is ranked 20th in the nation by 247Sports. Four-stars Pete Nance, Miller Kopp, and Jordan Lathon along with three-star Ryan Young will all most likely play significant roles in coming years for the Wildcats and will look to build on the program’s recent success, and help them find a sense of consistent success. Photo: Getty Images
Follow Sean on Twitter
Follow Adam Zagoria on Twitter
And Like ZAGS on Facebook

Miles Bridges, No. 2 Michigan State rally from 27 points down to beat Northwestern