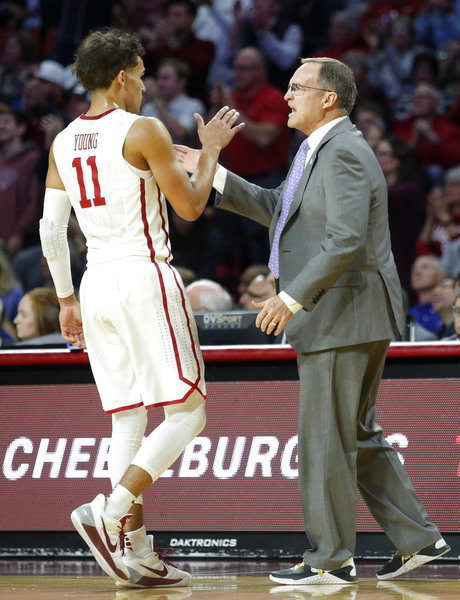 NORMAN, Okla. (AP) — Trae Young had 26 points and nine assists, and No. 12 Oklahoma rallied to beat No. 5 Kansas 85-80 on Tuesday night. Young, the nation’s leader in scoring and assists, struggled with efficiency in losses to Kansas State and Oklahoma State last week. Against Kansas, the freshman point guard made 7 of 9 field goals and 10 of 12 free throws. “This is how I want to continue to play…I liked how I played today,” Young told ESPN of his less risky approach to the game. “Everybody played well and this is a good team we beat today. I’m proud of my teammates.”

Christian James scored 15 points and Brady Manek added 14 for the Sooners (15-4, 5-3 Big 12), who won their 13th straight at home. Svi Mykhailiuk scored 24 points and Malik Newman added 20 for Kansas (16-4, 6-2), which had won five straight. Devonte’ Graham, Kansas’ leading scorer, finished with 11 points on 4-of-19 shooting. Kansas led for most of the second half, but James’ 3-pointer with 1:09 remaining on an assist from Young put the Sooners up 82-80. Manek later drained a 3-pointer, also on an assist from Young, to make it 85-80 with 25 seconds to play. Oklahoma effectively limited Kansas center Udoka Azubuike. The 7-footer scored nine points, all in the second half. He played with foul trouble and made just 1 of 7 free throws. Oklahoma drew the second foul on Azubuike with 10:14 left in the first half and Kansas leading 19-13. The Sooners went on a 13-4 run in the next three minutes to take the lead. The Sooners led 43-41 at halftime. Young took just four shots and had six assists before the break, and he didn’t attempt a 3-pointer. Newman led Kansas with 15 points in the half and Mykhailiuk added 11. Graham was held to 7 points on 2 for 9 shooting before the break. Kansas took the lead in the opening minutes of the second half. Azubuike made three consecutive buckets during one stretch to give Kansas a 55-47 lead. Oklahoma intentionally fouled Azubuike, a 41-percent free throw shooter coming in, several times. He missed all five of his free throws in the final 3:37 to help the Sooners get back into the game. BIG PICTURE Kansas: The Jayhawks were two games ahead of the rest of the Big 12 in the loss column and missed a chance to take control of the conference race. Oklahoma: The Sooners needed a win after the two losses to unranked opponents. Young trusted his teammates at crunch time, and they delivered. UP NEXT Kansas hosts Texas A&M on Saturday in the Big 12/SEC Challenge. Oklahoma travels to Alabama on Saturday in the Big 12/SEC Challenge. Photo: AP (AP Photo/Garett Fisbeck)