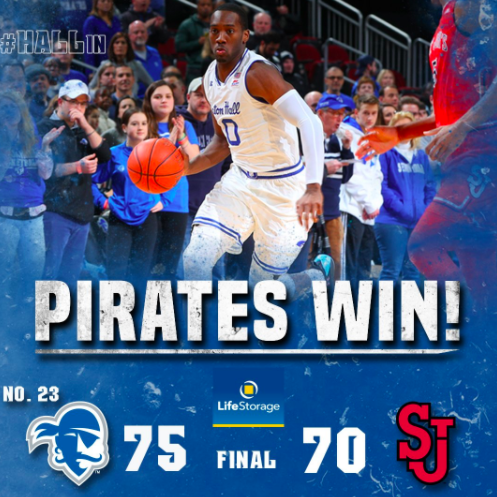 NEWARK, N.J. (AP) — Khadeen Carrington scored 24 points to help No. 23 Seton Hall beat St. John’s 75-70 on Sunday at the Prudential Center. Desi Rodriguez added 23 points and nine rebounds for the Pirates (13-2, 2-0 Big East). Myles Powell had 16 points, and Angel Delgado finished with 12 points and 12 rebounds. Seton Hall has won four straight and nine of 10. The Red Storm (10-4, 0-2) played without scoring leader Shamorie Ponds. The Big East’s No. 3 scorer at 20.1 points per game, he injured a knee Thursday night in a loss to Providence. Tariq Owens led the Red Storm with 19 points. Marvin Clark II added 18 points before fouling out, Bashir Ahmed had 16, and Justin Simon 16. The Pirates were 10 of 18 from 3-point range in the first half and 13 of 29 overall. UP NEXT: St. John’s: At Creighton on Wednesday night. Seton Hall: At Butler on Saturday. Photo: @SetonHallMBB
Follow Adam Zagoria on Twitter
And Like ZAGS on Facebook