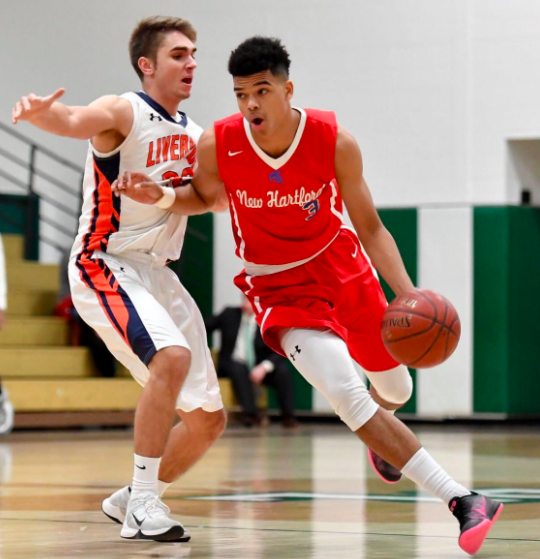 By SEAN BOCK Frankie Policelli, the 6-foot-8 small forward from Long Island Lutheran (NY), recently picked up offers from Texas Tech, Cincinnati and Dayton. They came following his team’s 53-47 victory over Cox Mill (NC) and 2019 consensus top-100 recruit Wendell Moore at the Beach Ball Classic in Myrtle Beach. Policelli had 12 points and 7 rebounds in the winning effort. Policelli and his team ended up losing in the championship of the tournament against Montverde (FL) Academy, and Duke commit R.J. Barrett, the No. 1 player in the 2018 class. Policelli told ZAGSBLOG that Cincinnati started talking to him about two weeks ago. “Coach [Darren] Savino called me up and told me he was at the game and said ‘congratulations you have an offer from us,'” Policelli said. “I play hard, and he liked how I was a good teammate and extended me an offer.” “I don’t know much about them yet, but hopefully, I can learn some more through Coach Savino and do my research on the program, but I like their history,” he added. As for Dayton, the Flyers have been in contact since the beginning of the high school season. Though they’ve been in contact longer than the Bearcats, the message from both schools is similar, and he wants to learn more about each program. Along with those two schools, who have been in contact with him almost daily recently, Policelli said, “Texas Tech texts and calls about every day, Boston College checks in a lot, and Butler reaches out here and there.” Policelli has taken official visits to George Washington (Oct. 6) and Stony Brook (Oct. 9) and plans on taking his three remaining visits sometime in the spring. He is still unsure what schools he will visit. According to Rivals, Policelli is a three-star prospect and the No. 146 player in the 2018 class. “At 6-9, I think Frankie’s versatility is what attracts coaches to him,” said NY Jayhawks coach Jay David. “He can play at both wing spots and at this level play a stretch 4 if necessary. He can guard 1 through 4, shoots at an extremely high level. He has an incredible upside at 17 years old his body will continue to develop getting stronger at the next level.” Photo: @NYJayhawks on Twitter
Follow Sean on Twitter
Follow Adam Zagoria on Twitter
And Like ZAGS on Facebook