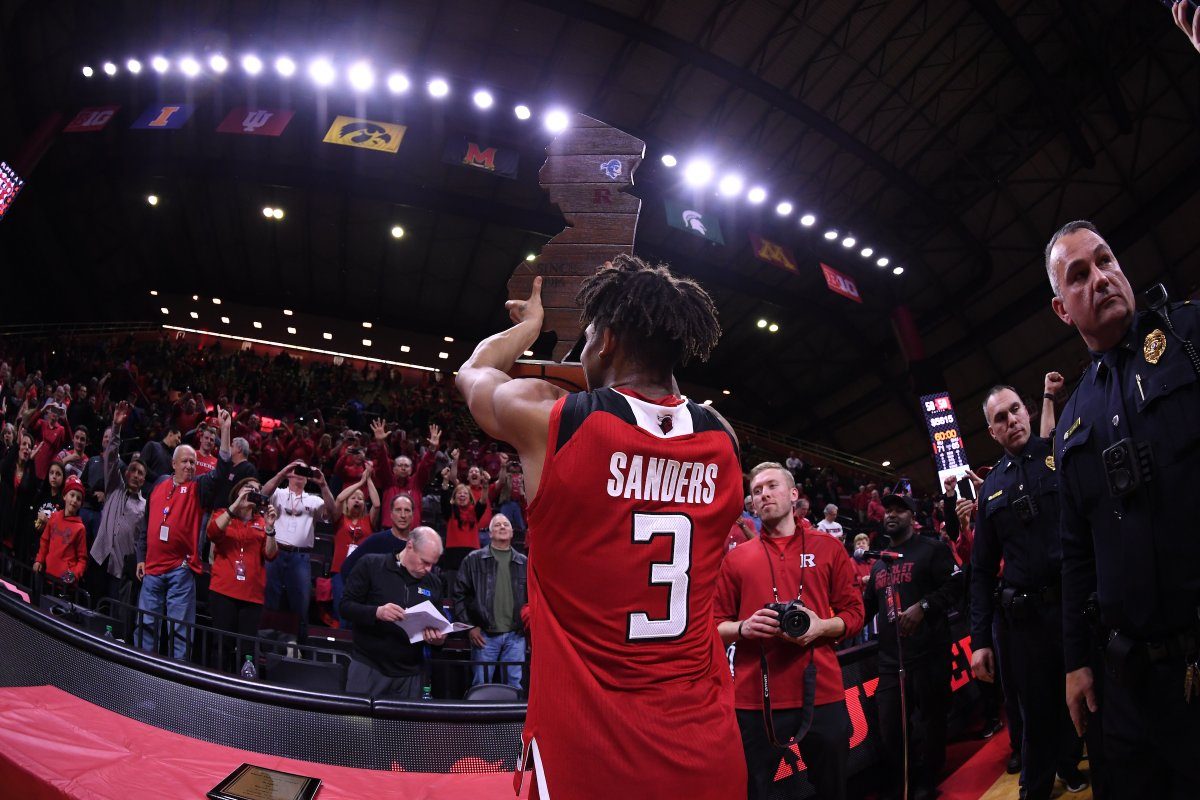 By MIKE McCURRY PISCATAWAY, N.J.—Steve Pikiell vividly recalls his Rutgers head coaching debut. The thing is, he’s one of very few. For a program that most recently made the NCAA Tournament in 1991 and last registered a winning season in 2005-06, any semblance of quantitative progress represents an upward trajectory. Even in the attendance department. Pikiell estimates that 1,800 fans were on-hand for Rutgers’ win over Molloy on November 11, 2016. The turnout was embarrassingly low. Expectations were lower still for the Scarlet Knights under Pikiell, the latest to be tasked with one of the more massive rebuilding jobs at the Division-1 level. What a difference a year makes. On Saturday, 8,315 were accounted for at the Louis Brown Athletic Center—the RAC’s largest crowd since February 23, 2002—to witness the first real step toward the revival of Rutgers men’s basketball in the form of a come-from-behind, 71-65 upset victory over in-state rival and 15th-ranked Seton Hall. Rutgers, which trailed by as many as 13 and found itself down 9 with less than six minutes remaining, ended the game on a 17-2 run. In doing so, the Scarlet Knights regained the Garden State Hardwood Classic trophy, snapping a four-game losing streak to the Pirates while defeating a ranked opponent for the first time since January 11, 2015 versus then-No. 4 Wisconsin.

"It's hard to talk with all these fans here. This is for them."

“Just this environment, if we can keep it like that, it’s a real tough place to play,” said Pikiell. “It’s a very good day for Rutgers Nation.” Rutgers shot a lowly 34 percent from the field, made just three three-pointers all afternoon, and had only eight assists on 23 made shots…yet still found a way to win. That’s a testament to the foundation of Pikiell’s coaching philosophy: toughness, rebounding (Rutgers matched Seton Hall on the boards at 46 apiece), and defense (Seton Hall managed just 0.89 points per trip, the first time the Pirates failed to crack the one point-per-possession mark this season). Another major pregame point of emphasis for Pikiell was free throws. Rutgers delivered in that area, finishing with a +16 advantage in freebies from the charity stripe. “We weren’t making shots, we weren’t making free throws, just hung in there—that’s what we’ve done—and figured out a way to win,” Pikiell said. Corey Sanders scored a game-high 22 points for Rutgers. Backcourt mate Geo Baker chipped in with 17. Deshawn Freeman was an inefficient 3-of-14 from the floor but attempted ten free throws en route to a 12-point, 16-rebound performance. Rutgers’ offensive big three came to play. But it was defense that allowed the Scarlet Knights to stay close and set up the opportunity for a decisive late run. Seton Hall dropped 42 in the first half and took a 10-point lead into the break. Myles Powell and Desi Rodriguez could do no wrong. The Pirates were thriving in transition. They shot 47 percent and committed just four turnovers. Suddenly, the script flipped. As Rutgers’ defensive intensity went up a notch, so too did the RAC’s decibel level. Sanders and Mike Williams utilized their quick hands to strip opposing ball handlers and disrupt passing lanes. The length and athleticism of Rutgers’ frontcourt was apparent, continuously frustrating Khadeen Carrington (10 points on 4-of-17 shooting, 5 turnovers) and especially Angel Delgado (7 points on 3-of-9 shooting), the latter of which RU combated by throwing four different defenders at over the course of the game. Seton Hall’s lead dissipated. Rutgers began to see a crevice of light at the end of the tunnel, which is all it needed. “When you have the enemy down and you have the foot on your neck, keep your foot on their neck and crush their throats,” said Ismael Sanogo, who finished with 10 points and 5 blocks. “Don’t let them breathe for air. That’s exactly what we did. We let them breathe and they came back and beat us. Credit to them though.” The ultimate bellwether stat for Rutgers: On 38 second-half defensive possessions, the Scarlet Knights forced 14 turnovers (37 percent turnover rate, nearly double the Division 1 average of 19 percent), leading to an 18-2 advantage in points off miscues. Oh, and Seton Hall didn’t score a single fast-break point after halftime. “These guys did a real good job of just staying the course and they were poised down the stretch,” Pikiell said. “I’m excited, but we can play better, too. We have the potential to be better.” Therein lies the difference between Pikiell, who guided Stony Brook to the NCAA Tournament in 2015-16 before making the leap to Rutgers, and his Piscataway predecessors. Eddie Jordan was moved to tears following his signature victory. Pikiell, though understandably thrilled with beating Seton Hall, carries the mindset that this is only the beginning of better things to come. “This is a step in the process, and if these guys keep working and keep believing, good things happen,” Pikiell said. Pikiell appears to be the right man for the job. Ultimately, his success will be defined by whether or not he can end the longest NCAA Tournament drought among major-conference teams. With the culture he has already instilled at Rutgers this quickly into his tenure, Pikiell is on the right path, further validating the mantra “If you build it, they will come.” Photo: @RutgersMBB Follow Mike on Twitter Follow Adam Zagoria on Twitter And like ZAGS on Facebook

Against Seton Hall, Rutgers has chance for marquee win to help résumé, recruiting