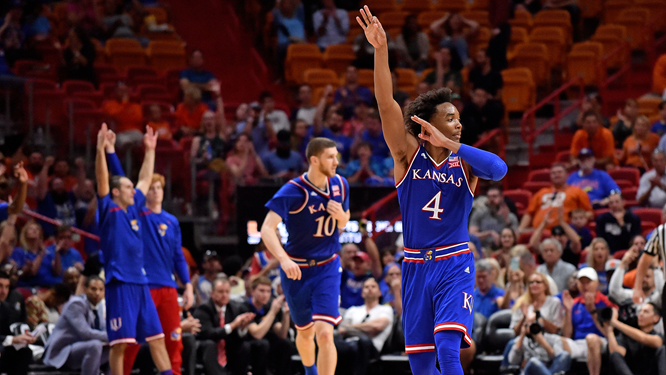 By MIKE McCURRY Player of the Year is a highly debated topic in college basketball circles. Person of the Year? Not so much. But, in light of recent events, it is there that we begin this conversation. Because the early runaway favorite for Person of the Year in the sport isn’t putting up 29 points and 9 assists per night nor stumbling out of bed with a double-double. He’s merely saving lives. Unless you’ve been living under a rock for the last handful of days, you’re familiar with South Carolina State’s Ty Solomon. The senior guard went into cardiac arrest during Saturday’s game at NC State. Suddenly at PNC Arena, wins and losses were of little importance. It became a matter of life and death. Solomon survived the incident and is reportedly doing well in his recovery. If not for South Carolina State athletic trainer Tyler Long, who knows how much different of an outcome would have transpired. Long performed chest compressions on Solomon, attempting to revive his heart until paramedics arrived. “Tyler stepped in at the right time, I guess with CPR,” Solomon said, according to The News & Observer. “Everybody else came in with the defibrillator and did what they had to do to revive me.” Tyler Long, Person of the Year candidate. Good luck topping that. PLAYER OF THE WEEK: DEVONTE’ GRAHAM, KANSAS  Devonte’ Graham wasn’t exactly thriving in the initial five games of the post-Frank Mason era, averaging 12 points on 35 percent shooting, including 29 percent from behind the arc. Then came last week. Graham, whose previous career-high was 27, dropped 35 on Toledo on Tuesday before mirroring that performance against Syracuse on Saturday. He shot 67 percent from the field in the Jayhawks’ two wins and made 12-of-21 three-pointers. In doing so, he became the first Kansas player to post back-to-back 30-point outings since Andrew Wiggins back in 2014.

? Devonte' Graham lit up South Beach Saturday with another 35 pt outing as #KUbball handed Syracuse its first loss of the season, 76-60. pic.twitter.com/oT2J5t6zgW

That’s one way to break out of an early-season shooting slump. Graham, averaging 18.6 points and 8 assists for No. 2 Kansas, gets the Player of the Week nod over UNC’s Luke Maye (averaged 24.3 points and 11 rebounds on 63% shooting in three games) and Seton Hall’s Desi Rodriguez (26.5 points, 7.5 rebounds in two games). TEAM OF THE WEEK: SETON HALL  With all due respect to Xavier, last week’s runner-up after registering home victories over Baylor and Cincinnati—the latter of which was most hotly contested after the final buzzer—Seton Hall went out on the road to enhance their résumé. In a season-defining week, the Pirates outclassed Texas Tech at Madison Square Garden and defeated Louisville at the KFC Yum! Center. Facing two of the nation’s stingiest defensive teams, Seton Hall registered 1.24 points per possession, made 11-of-20 threes, and corralled 42% of their missed shots against Texas Tech, only to follow that up by with 1.03 points per trip versus Louisville on the strength of 53% two-point shooting—easily the highest mark allowed by the Cardinals this season. Leading the way was Rodriguez, but this is far from a one-man band. Not many teams can match the firepower of the Pirates’ top four: Rodriguez, Angel Delgado, Myles Powell, and Khadeen Carrington, who is embracing his new role of primary point guard.

Desi Rodriguez wins it for Seton Hall. Helluva week for the Pirates, who knock off Texas Tech and Louisville. pic.twitter.com/mcCtL580lN

It’s winning in the NCAA Tournament—not simply getting there—or bust for Seton Hall this year. THE BIG TEN ISN’T EXACTLY BATTING 1.000 THIS SEASON. And, for the purposes of this piece, let’s focus only on hoops (sorry, Ohio State). For a four-year run spanning the 2010-2011 and 2013-2014 campaigns, the Big Ten could pose a valid argument for being the greatest league in the land. But now there’s no Robbie Hummel, Draymond Green, or Frank Kaminsky to save the conference, which is headed for its fourth consecutive mediocre season. The Big Ten got spanked in their annual challenge versus the ACC, losing 11-3. The top-three teams are pretty visibly defined in Michigan State, Minnesota, and Purdue. But after that, it’s anyone’s guess. And it’s slim pickings. In the post-Melo Trimble era, Maryland is turning the ball over on nearly a quarter of its possessions and already lost to St. Bonaventure sans Jaylen Adams. Is anyone really buying Penn State? The Nittany Lions haven’t beaten anyone of note and fell at home on Monday to Wisconsin. The Badgers kicked off conference play by getting run out of their own gym in an 83-58 loss to NIT-bound Ohio State and are in serious jeopardy of missing their first NCAA Tournament since 1997-1998 (a feat that even Bill Self must be impressed with, by the way). Northwestern (5-4) is struggling being the hunted as opposed to the hunter for the first time in program history. Iowa is 4-5. John Beilein’s offense at Michigan is somewhat human, stemming from the Wolverines’ lack of production at the point guard spot. It’s bad enough that league play has started already, all because the Big Ten is holding its tournament a week earlier than fellow power conferences at Madison Square Garden in an effort to augment its brand. You do that by winning marquee out-of-conference games and placing league members in the polls. Not by risking Michigan State having a two-week layoff, or close to it, before its first NCAA Tournament game. I’m sure Tom Izzo and his peers are just thrilled. THE BEST BRIDGES IN COLLEGE HOOPS THIS YEAR IS NOT WHO YOU THINK. I know, blasphemous, right? The landscape of the 2017-2018 season changed for good in April, when Miles Bridges declared he would pass up a lottery selection by returning to Michigan State for his sophomore season, citing unfinished business. The consensus preseason National Player of the Year surely can’t be the second­-best Bridges in college hoops this season. Or could he? Have you seen what Mikal Bridges is doing? Villanova’s Bridges hasn’t seen an increase in minutes. He’s logging 30 minutes a game, same as last year. But, with Josh Hart and Kris Jenkins graduating, Bridges’ Usage Rate has jumped from 15% to 23%. The 6-foot-7 “3-and-D” wing has more than taken advantage of the extra possessions. Entering Tuesday’s showdown with No. 12 Gonzaga, Bridges is averaging 17.9 points, 6.3 rebounds, 2.5 steals, and 1.4 blocks. He’s knocked down 50% (21 of 42) of shots from long distance. He hasn’t only broken out, he’s playing like a first-team All-American.

This is beautiful basketball and sooooo Villanova. Purposeful ball moment. An effective pump fake by Brunson. The extra pass by Paschall. Mikal Bridges is now shooting 53% from 3 this season on 5 attempts per game. pic.twitter.com/BtMOZ0LCcU

As for Miles Bridges, he’s been slowed by an ankle injury. While he’s averaging 14.6 points and 6.6 rebounds, his three-point percentage is down (from 39% to 31%) and he’s still adjusting to the transition of going from power forward to the 3. It’s early December. But in the early going, the premier Bridges resides in Philly. ADDITIONAL NOTES

So yeah, @markushoward11 had a night. An 11 3-pointers kind of night. That's an #mubb record. No big deal. #SCTop10 pic.twitter.com/bYiQct9k1G