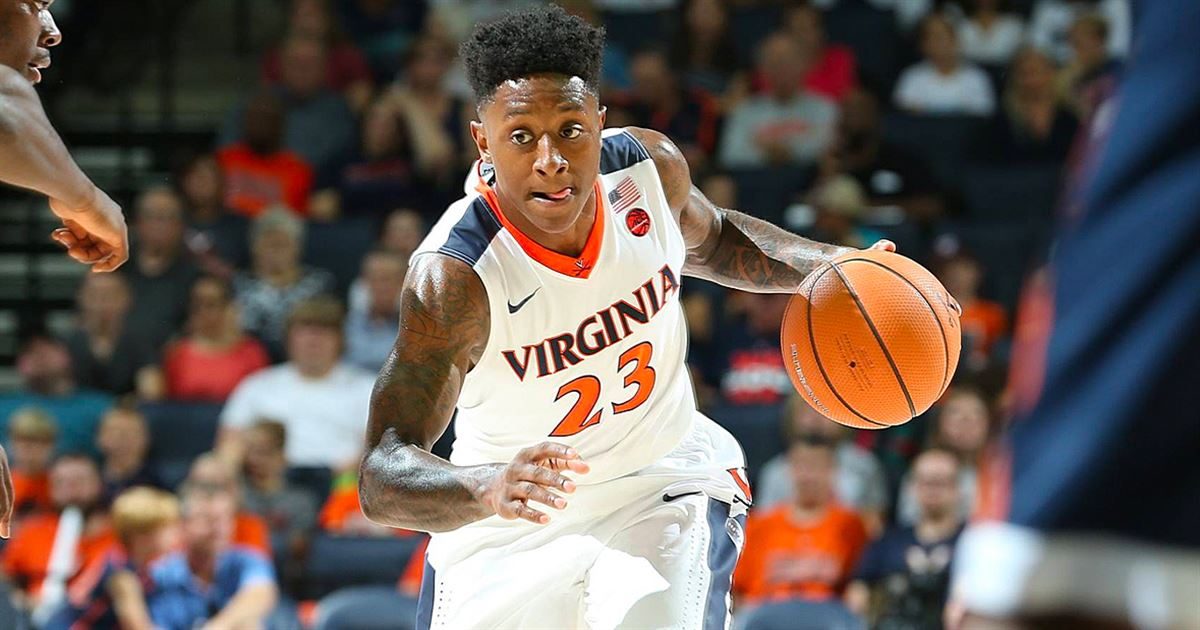 NEW YORK — When Nigel Johnson opted to leave Rutgers for Virginia as a graduate transfer last April, he did so because he wanted to join a program with a winning tradition. “Just having the tradition and the mentality of winning every night, that’s the main goal,” the 6-foot-1 Johnson told me Friday night at Barclays Center. “And that’s what we expect, we expect to win, which is something that wasn’t really always at Rutgers. We were pretty good last year, turned a big page, but coming here it’s a tradition of winning. And if you’re not winning, then you’re not really doing anything.” Johnson helped Virginia win the NIT Season Tip-Off on Friday by virtue of his 12-point, 3-rebound, 3-assist performance in a 70-55 victory over Rhode Island in the championship game. On a night when Ty Jerome and Kyle Guy combined for just 11 points on 3-for-11 shooting, senior forward Isaiah Wilkins went for 19 points and 6 rebounds en route to tournament MVP honors. Senior guard Devon Hall, who, along with Wilkins, has taken over the leadership role with London Perrantes gone to the NBA, tallied 18 points and 4 rebounds. The Cavaliers should be ranked in the Top 25 come Monday. “I want to play in the postseason and get far,” Johnson said. “I want to get a championship and I already got one now. So the next thing is to get the next championship, which is the NCAA.” Johnson is actually now on his third school after spending two seasons at Kansas State before transferring to Rutgers for the 2016-17 season, where he averaged 11.3 points and 3.3 rebounds. Now he’s a complementary piece on a solid Virginia team. He’s averaging 7.3 points and 3.0 rebounds while playing 20 minutes a game. He’s still making the transition to a new system. “It’s a lot to pick up on, the offense and especially the defense” Johnson said. “[Coach Tony Bennett] is all about the defense and holding teams under 50 points.” Johnson has inspired confidence in his teammates already. “Since I’ve been here, I don’t think I’ve seen anybody who’s that quick,” Wilkins said. “He’s able to get the ball up and take the ball places when he’s right mentally so it was good to see him play well. I know he was excited. It’s tough to come in and play at a different place immediately so I’m happy for him.” Said Bennett: “I thought Nigel had a terrific game.” As for his former teammates at Rutgers, Johnson hopes they turn it around under Steve Pikiell. “I hope so,” he said. “I still got a whole lot of friends there and a couple best friends on the team so I hope they have a really good season.”   Photo: 247Sports Follow Adam Zagoria on Twitter And Like ZAGS on Facebook

Against Seton Hall, Rutgers has chance for marquee win to help résumé, recruiting