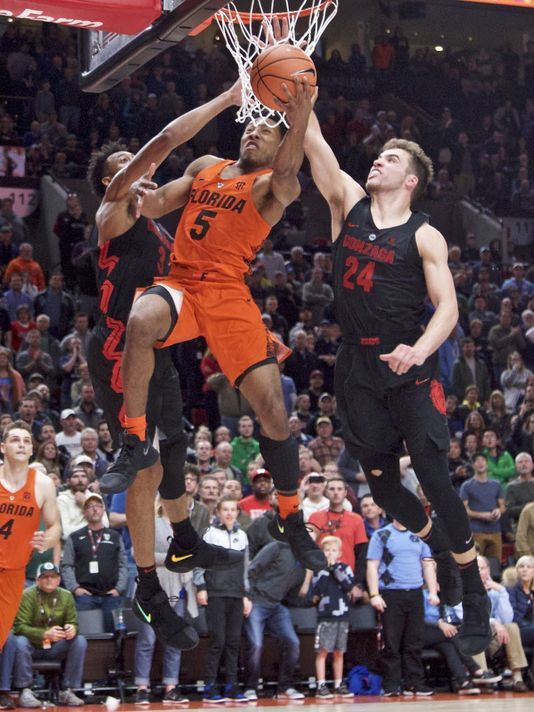 The PK80 Invitational has more than lived up to the hype. On Sunday, the two championship brackets will feature a Who’s Who of heavyweight teams when No. 1 Duke faces No. 7 Florida in the Motion bracket (10:30 p.m. ET, ESPN) and No. 4 Michigan State takes on No. 9 North Carolina in the Victory bracket (8:30 p.m. ESPN).

Jalen Hudson had a career-high 35 points, including eight three-pointers, as No. 7 Florida downed No. 17 Gonzaga 111-105 in double overtime in an instant classic on Friday night.

Chris Chiozza added a career-high 26 points and 10 assists for the Gators (5-0), who will face No. 1 Duke in the bracket championship on Sunday. The Blue Devils rallied to defeat Texas 85-78 in overtime earlier in the day.

Williams finished with a career-high 39 points and 12 rebounds for Gonzaga (4-1).

Florida has scored a combined 211 points in its last two games and looks like the best team in the SEC.   MICHIGAN STATE TO FACE NORTH CAROLINA IN MOTION BRACKET

(AP) — Tom Izzo wasn’t pleased with much about No. 4 Michigan State’s offensive performance, except for Cassius Winston.

Winston scored 12 of his career-high 28 points during a 4-minute span late in the second half to help the Spartans pull away for a 77-57 victory over Connecticut on Friday night to reach the championship game of the PK80 Invitational.

Winston was sensational in the closing minutes as the Spartans advanced to a matchup with No. 9 North Carolina in the “Victory Bracket” title game on Sunday. Winston was responsible for 14 of the 16 points during the spurt where Michigan State hit eight straight shots and took a 14-point lead. Winston started the run with a 3-pointer and scored on pull-up jumpers and driving layups as the Spartans finally shook the Huskies.

And while Izzo praised how well Michigan State played defensively against UConn, he was less than satisfied with the offensive execution outside of Winston.