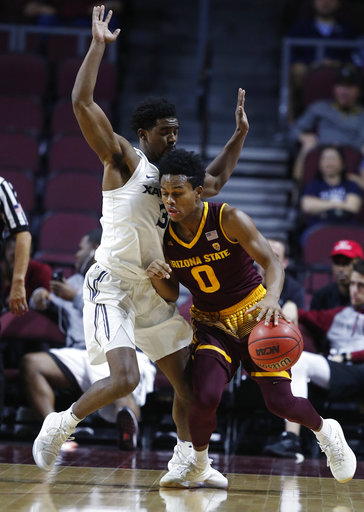 By ASHTON FERGUSON LAS VEGAS (AP) — Tra Holder scored a career-high 40 points to lead Arizona State to a 102-86 upset of No. 15 Xavier in the championship game of the Las Vegas Invitational on Friday. Holder scored 23 of his 40 points in the second half for Arizona State (6-0), which shot 55.9 percent from the field. The 6-foot-1 senior guard finished 14-of-22 shooting from the field, including 5 of 8 from 3-point range, and added four rebounds and four assists. He was named the tournament’s MVP. The Sun Devils trailed by 15 points in the first half but closed the half on a 15-2 run — capped by a leaning 3-pointer at the buzzer by Holder — and headed into the locker room trailing 46-44. Holder gave Arizona State its first lead since the opening minutes after converting two free throws 45 seconds into the second half. After the teams traded leads, Kodi Justice nailed a 3-pointer from the left corner to give Arizona State the lead for good at 56-55 with 16:29 to go. Justice drilled another 3 on the team’s next possession to give the Sun Devils a six-point lead and all the momentum. Xavier (5-1) had no answer for the perimeter play of Arizona State the rest of the way. Shannon Evans II added 22 points for Arizona State, which also got 16 points from Justice and 13 from Remy Martin. J.P. Macura led Xavier with 23 points on 7-of-11 shooting. Kerem Kanter, the younger brother of New York Knicks center Enes Kanter, added 12 points. Trevon Bluiett, a two-time first-team Big East honoree and All-America candidate, was held to 11 points. The senior had scored at least 20 points in each of Xavier’s first five games. BIG PICTURE Xavier: The Musketeers lost their first game since falling to Gonzaga 83-59 in the Elite Eight on March 25. Xavier likely will drop a few spots in the polls next week but has an opportunity to regroup by facing two ranked teams in a row in Baylor and Cincinnati. Arizona State: The Sun Devils have scored 90 points in all six of their games this season and might find themselves in the Top 25 after defeating the Musketeers. UP NEXT Xavier will host No. 22 Baylor in a matchup of Top 25 teams Tuesday. Arizona State will have a week off before facing San Francisco at home on Dec. 2. Follow Adam Zagoria on Twitter And Like ZAGS on Facebook