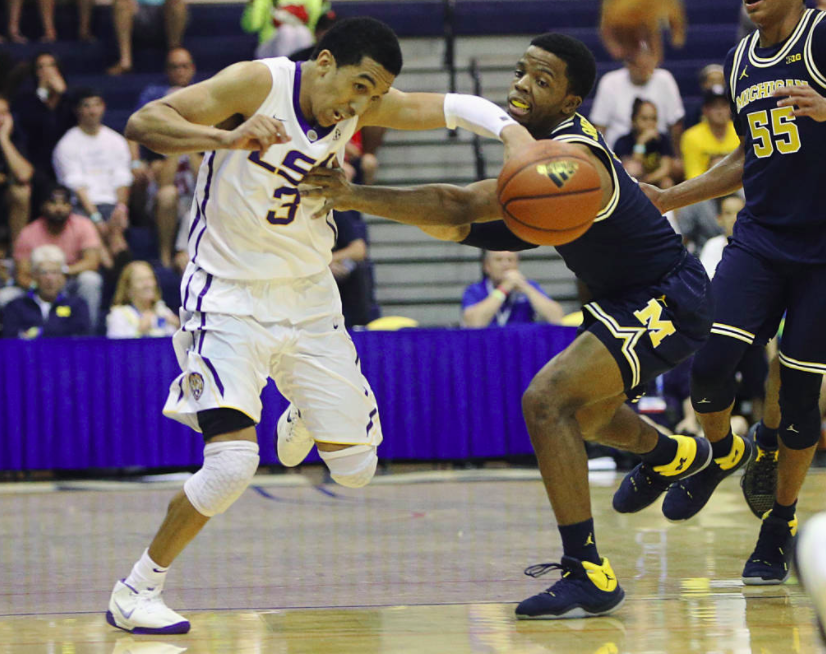 By SEAN BOCK A new coach, a new system, and unproven players, the LSU basketball program wasn’t expected to be relevant this season. Going into Monday night’s matchup against Michigan, the Tigers were 6 point underdogs. Tiger’s freshman point guard Tremont Waters was having none of it. In his third collegiate game, Waters played with confidence and a willingness to do anything to get the win. He finished the night with 21 points and 4 assists to help lead his team to a 77-75 victory over the Wolverines. Throughout the contest, Waters made some incredible plays, especially down the stretch.

Everyone talks about diaper dandies like Marvin Bagley, Michael Porter Jr., Kevin Knox, and Mo Bamba, but Waters has shown he deserves to be in the conversation of elite freshmen. Waters is averaging 17.3 points and 6.0 assists to start the season and has LSU – who was projected to finish in the bottom tier of the SEC – at 3-0 going into the Maui Invitational Semifinals against No. 13 Notre Dame Tuesday night. “Everything starts in practice,” Waters said after the game. “Our conditioning, our strength, and conditioning overall with Coach Goldin, that sets our tone for our practice and going to practice and working on all our little things that we need to work on.” Waters will have his hands full with Irish point guard Matt Farrell. Regarded as one of the best point guards in the nation, Farrell is averaging 18.3 points and 3.8 assists in his senior season and will use his experience to frustrate the younger Waters. Photo: LSU Sports Net Follow Sean on Twitter Follow Adam Zagoria on Twitter And Like ZAGS on Facebook