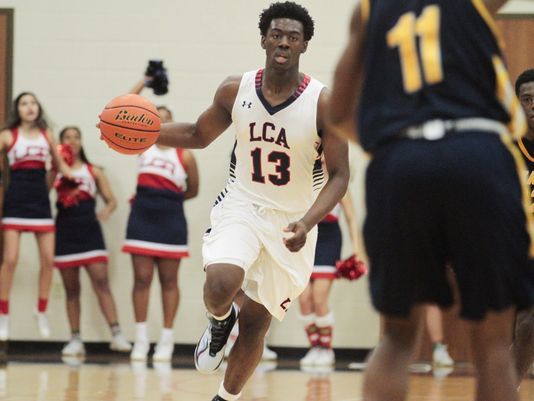 Greg Williams, the 6-foot-4, 205-pound combo guard from Lafayette (LA) Christian Academy, is closing in on a college decision following his most recent official visit to St. John’s for their Midnight Madness event. Ranked the No. 26 shooting guard in the Class of 2018 by 247Sports.com, Williams also took officials to Tulane and Nevada. “I’m pretty confident he’s going to sign during the early period,” Greg Williams Sr. said Tuesday by phone. “He likes the choices that he has. A lot of coaches are calling and asking [when he’s going to sign]. They’re hopeful that he doesn’t sign in the early period [so] that they can re-recruit him, but I’m pretty confident he’ll sign in the early period.” For their 2018 class, St. John’s is focusing on Williams and Prolific Prep (CA) forward Jordan Brown — to go along with committed Montverde (FL) Academy forward Josh Roberts. “Before we came [to St. John’s], they already expressed to us their excitement about the possibility of him joining,” Williams Sr. said. They feel real good about him and what he can bring to the program not just on the court but off the court. He’s involved with the United Way so he was going to pick that up if, in fact, St. John’s is the place that he chooses. “St. John’s offers a wonderful variety of things. It’s a great education. He plans on looking at Communications and from what I understand St. John’s has a great program. I know the Big East is a little different now, but it’s still tough, hard-nosed basketball. And we’ve played against a lot of the kids in Under Armour and [Nike] EYBL so he knows all of them and feels comfortable playing. There’s a whole lot of good things about St. John’s.” Williams previously visited Tulane and Nevada. All three schools are coached by men with NBA coaching or playing experience: Chris Mullin at St. John’s, Mike Dunleavy at Tulane and Eric Musselman at Nevada. “They had former NBA head coaches [Mullin only played and worked as an executive], so I wanted to see if they used NBA sets, things of that nature,” Williams Sr. said. “I wanted to talk to them about their NBA contacts, those things are important. So when you look at basketball, you can’t just focus on the blue bloods, the Kansas’, Dukes, North Carolinas, Kentuckys because there aren’t many head coaches in college basketball that were former NBA coaches. When you’re really trying to get ready, or see if you can play at that highest level, then I think these guys could tell him the truth because they’ve been in draft rooms and they’ve made decisions up or down on thousands of kids.” As for Tulane, they visited in the first weekend of October. “Tulane looked at him and he definitely fits a need,” Williams Sr. said. “What’s more important to them is he’s a combo guard. They could use him at the point or a two and they were going to be losing players, so he would fit in right in and they have a lot of minutes for him. They had one staff member [Tony Chiles] who was very familiar with him since eighth grade. And then Doug Stewart recruited Greg when he was an assistant at another school. Great guy.” After Tulane, they visited Nevada. “Nevada’s message is look we don’t recruit heavy, we don’t over-recruit, we’re going to look for three or four kids and go after the top one,” he said. “If that doesn’t work, go down that ladder but they looked at him. They were able to show us something where hey this guy on our team does this and we like it, and they would pull up film and say Greg does the same thing. That’s why we like him. That’s why we’re not looking at a bunch of people because he fits exactly what we need. It’s a college ticket, they are the ticket in Reno.” Lafayette Christian coach Byron Starks says whoever gets Williams is getting a player who can contribute right away. “I think whatever schools gets him is going to have a great person, most importantly,” Starks said. “On the court, he’s a combo guard. He can play one, two, multiple positions and he’s a great a rebounder for a guard of his size. Shoots the ball fairly decent and is extremely athletic in terms of getting to the rim and getting the shot that he needs.” Photo: TheAdvertiser.Com