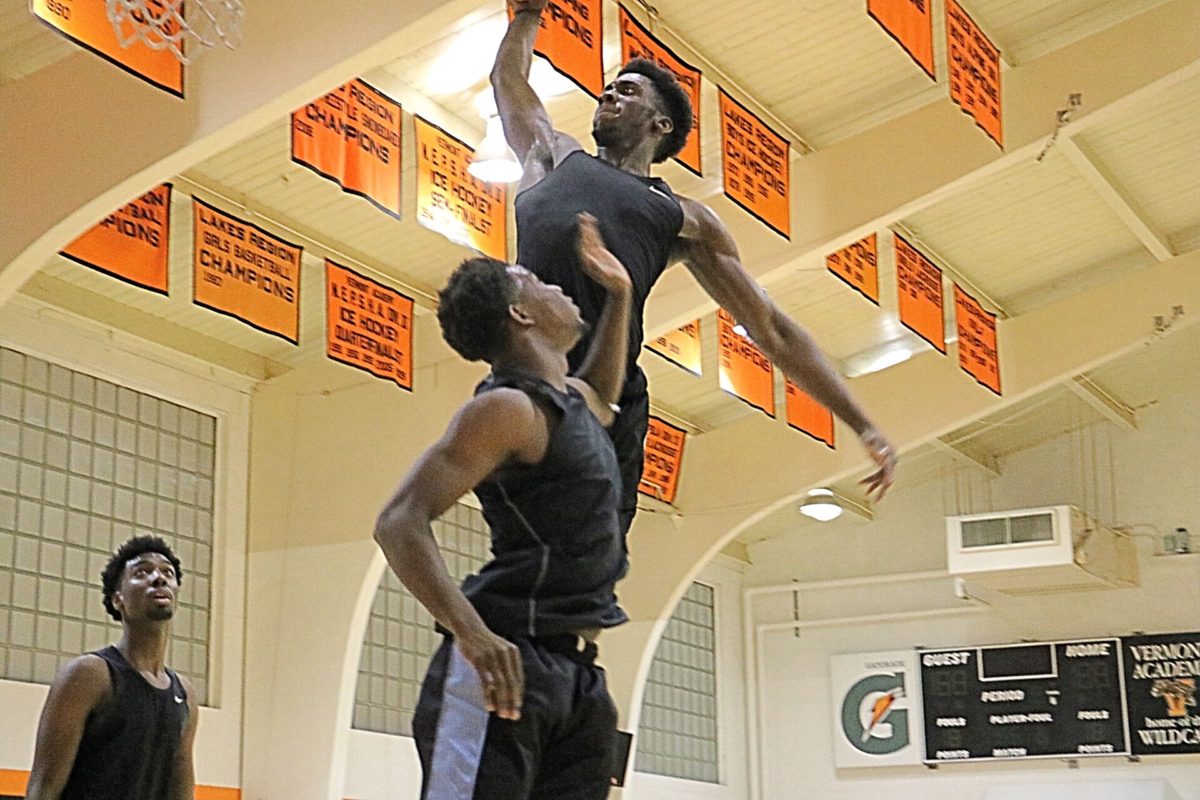 Simi Shittu will be on a college campus at this time year next but he doesn’t plan on staying for long. Shittu, the 6-foot-10 power forward from Vermont Academy and CIA Bounce, hopes to be a one-and-done college player. NBADraft.net currently has him projected as the No. 7 pick in the 2019 NBA Draft, while ESPN’s Jonathan Givony does not have Shittu in his 2019 mock. Asked if it was his goal to be one-and-done, Shittu said Thursday by phone, “Yeah, it is.” According to 247Sports, Shittu is ranked as the No. 8 overall player in the Class of 2018 and the No. 1 player from the state of Vermont. Playing with CIA Bounce on the Nike EYBL Circuit, Shittu averaged 20.1 points, 10.2 rebounds, 3.0 assists, 1.2 steals, and 1.4 blocks per game, in 16 games played, and was named to the All-Peach Jam first team. In three games at Peach Jam, Shittu averaged 20 points, 8.8 rebounds, 3.2 assists, 1.0 steals, and 1.0 blocks per game.

For the moment, Shittu is considering Vanderbilt and North Carolina, although other schools have also expressed interest. He cut Arizona from his list following the FBI probe, as first reported here. Shittu took his first official visit to Vanderbilt this past weekend. “It was great, really good school,” he said Thursday by phone. “It’s really close to the city. The coaches, they seem really genuine and they have a really good vision for me.” He added: “[They said I can] create my own path and be the first guy to really build a program. They’re going to play me everywhere and do what they can to get me to be one-and-done.”

Vanderbilt is also involved for 2018 guards Darius Garland and Romeo Langford. “They have two scholarships left, so it’s either one of them,” Shittu said. Shittu said he and Garland have talked about potentially linking up in college. Garland visits Kentucky this weekend and is also considering Vanderbilt, Indiana and UCLA. “I talked to Darius and we talked about maybe going together,” Shittu said. “That could be a possibility but he’s still taking his visits and I have a visit to UNC.” How good could they be together? “That could be really good because we’re both unselfish and we both can score,” Shittu said. “And we’re both really high-profile players so we could give the school a higher profile.” Shittu also liked the city of Nashville. “It’s nice, a lot of celebrities and a lot of really nice people,” he said. “The city doesn’t really sleep. There’s always something going on.” Next up Shittu will visit North Carolina Nov. 10. “They want me to come in and play right away,” Shittu said. “They really like how I play, and they just want me to be the best I can and help me be one-and-done there as well.” Shittu said he hasn’t decided if he will sign in November or wait until the spring. “I’m not sure,” he said. Shittu had a highly impressive summer, earning first-team All-Peach Jam honors. Vermont Academy coach Alex Popp believes he’ll be a difference-maker wherever he spends next season.

“From a coach’s perspective, what he’ll bring is relentless work ethic and it’s remarkable how contagious that is,” Popp said. “I’ve been coaching at the college and high school level for over 10 years now, and Simi is by far the hardest worker that I’ve had. And any time you have such a special talent attacking the workouts like he does, it’s just contagious to the rest of your team. So he would just benefit the team in the locker room and with all of the approach in trying to win games.” Shittu figures to be on campus for one season, and then could be part of a 2019 NBA Draft that could include several fellow Canadians, including potential No. 1 pick R.J. Barrett, who is considering Duke, Kentucky and Oregon. “I feel like each year Canadian basketball is getting better and better, and sending more players to the league,” Shittu said. “[Former Kentucky guard] Jamal Murray got the MVP of the Rising Stars of the World Game and we just won the U19 [World Championship] so Canadian basketball is getting noticed by people around the world. “I guess in the years to come, there will be more Canadians in the NBA.”