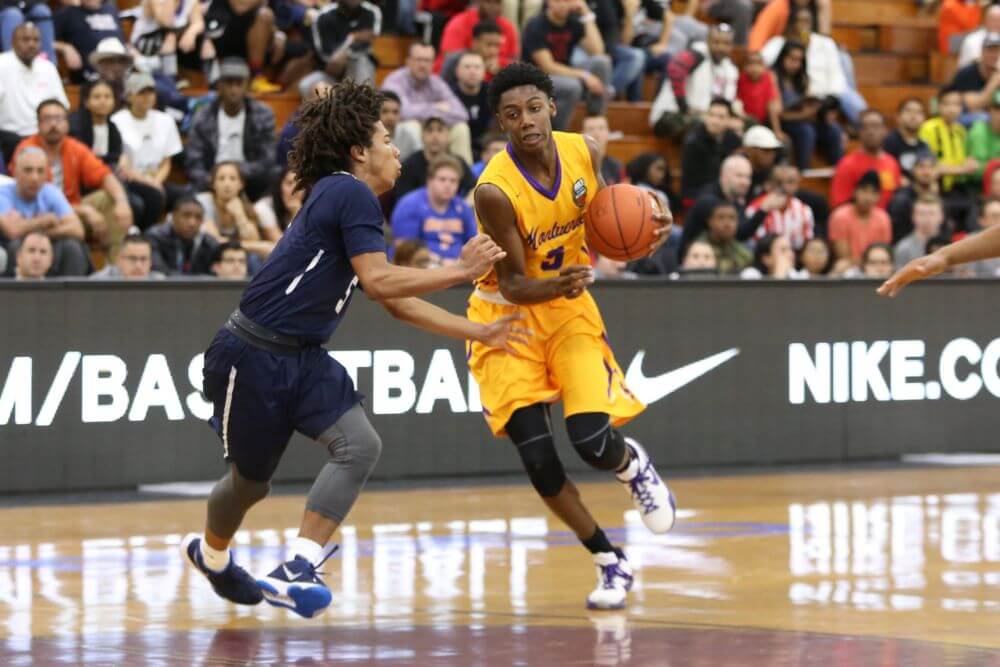 Kevin Boyle knows a thing or two about sending players to the NBA Draft lottery. The Montverde (FL) Academy head man has coached five players selected among the top three picks of recent NBA Drafts, including No. 1 picks Ben Simmons and Kyrie Irving, No. 2 picks D’Angelo Russell and Michael Kidd-Gilchrist and No. 3 pick Joel Embiid. Simmons and Irving were both born in Australia, while Embiid is originally from Cameroon. In the coming years, several of Boyle’s current and former  pupils could hear their names called by Commissioner Adam Silver. And what those players have in common is that they’re all from Canada. R.J. Barrett, a 6-foot-7 senior wing who came to Montverde from Mississauga, Ontario, is projected by multiple mock draft sites to be the No. 1 pick in 2019. He signed with Duke over Kentucky and Oregon in November. “He’s right in that class [with the other top picks I have coached],” Boyle said of Barrett on The 4 Quarters Podcast. “Most of the guys [who become superstars] are all those wing guys that end up better in these drafts over the years. That’s why I’m saying he should be the No. 1 pick in two years.”

Meantime, Andrew Nembhard, the 6-4 Canadian point guard who shares the backcourt with Barrett both at Montverde and with the UPlay Canada AAU program, also projects as a future NBA guard, Boyle said. “He’s a great player and person,” Boyle said when Nembhard committed to Florida this week. “Andrew will be a four-year starter and will be mid-to-late 1st round pick. He makes every player and person he touches better.” A third Canadian, Simi Shittu, who is now at Vermont Academy but also played for Boyle at Montverde, is projected as the No. 7 pick in 2019 by NBADraft.net. The 6-10 Shittu visits Vanderbilt this weekend and is also slated to visit North Carolina next month. Meantime, several other Canadians are mentioned on 2019 mocks. Kentucky freshman guard Shai Gilgeous-Alexander is projected at No. 13 by NBADraft.net. Nickeil Alexander-Walker, a freshman guard at Virginia Tech and the cousin of Gilgeous-Alexander, is projected at No. 13 by ESPN.com and No. 15 by NBADraft.net. He has drawn comparisons to a young Paul George. Both cousins played together at Hamilton Heights (TN). Meantime, Arizona freshman small forward Emmanuel Akot is projected at No. 14 in 2019 by ESPN.com. Syracuse freshman forward Oshae Brissett also looks like a future NBA Draft pick. Last February, seven Canadians were invited to the Basketball Without Borders Global Camp during the NBA All-Star Game in New Orleans. Barrett was named MVP of the event, while Shittu, Nembhard and Akot all attended, as did uncommitted senior guard Lugentz Dort of Orangeville Prep, Michigan-bound shooting guard Iggy Brazdeikis of Athlete Institute and Harvard-bound shooting guard Noah Kirkwood of Northfield Mount Hermon (MA). In the next few years, this wave of players figures to enter the NBA and join fellow Canadians like Andrew Wiggins, the former No. 1 overall pick now with the Minnesota Timberwolves, as well as Tristan Thompson (Cleveland), Jamal Murray (Denver), Kelly Olynyk (Miami), Cory Joseph (Toronto), Tyler Ennis (Lakers) and others. That also bodes well for the Canadian National Team going forward. Led by Barrett, the Canadians won their first-ever gold medal in an Olympics or World Cup when they won the FIBU U19 World Championship this summer in Egypt. “You’re seeing that we have players and we can win,” Barrett told me in July. “We can beat the U.S. Just a statement that we’re working really hard and we’re up and coming. As for a future Olympic gold-medal bid, he added: “I mean, we still got a lot of work to do before that happens but for sure to play on an Olympic team would be great.” Follow Adam Zagoria on Twitter And like ZAGS on Facebook