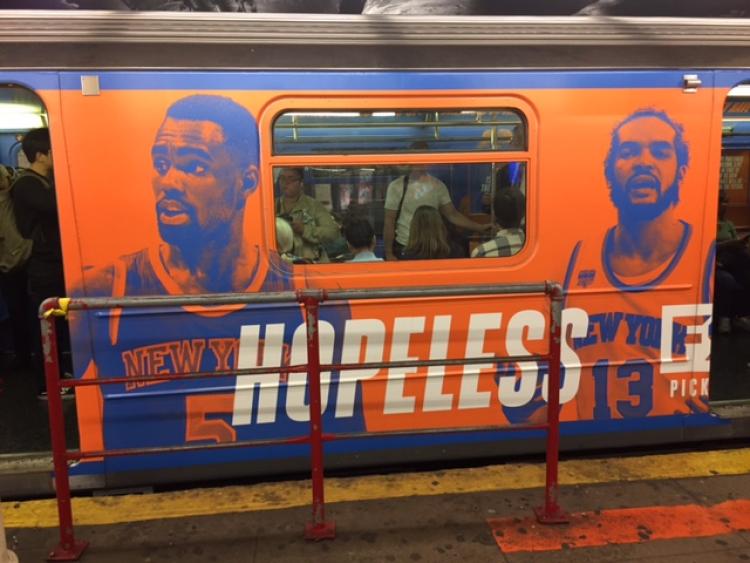 Knicks owner Jim Dolan called Rupert Murdoch on Tuesday and was “furious” about the new Knicks’ Hopeless ad campaign sponsored by FS1 that is running in New York City subways, an industry source said. They are “dealing with a s–tstorm internally at Fox,” the source said. “If you post something like this you have to expect Dolan’s wrath.” Murdoch and his family own both 21st Century Fox and News Corp through the Murdoch Family Trust. ESPN’s Darren Rovell later reported that the ad campaign — which asks Knicks fans to “pick a side“: Are the Knicks hopeful or hopeless? — will come down. “Today, FS1 featured statements on a New York City subway car intended to reflect the distinct emotions and opinions of passionate sports fans,” Fox Sports said in a statement. “We regret the tone and are removing the content in its entirety.” One subway car, pictured above via Jake Becker of the Daily News, has images of Tim Hardaway Jr. and Joakim Noah with the word “Hopeless” running across the side of the train. The Knicks have failed to make the playoffs for the last four seasons, and recently traded Carmelo Anthony to the Oklahoma City Thunder to facilitate a rebuild around young players like Hardaway Jr., Kristaps Porzingis and rookie Frank Ntilikina. One FSI-sponsored subway seat reads, “Nothing will change until Dolan sells the team.”

Another side of the subway cars is more optimistic, with slogans like “Porzingis is the truth.”

There are two sides to FS1’s ad campaign. The slogan is “Pick a Side.” pic.twitter.com/xGqdenCnpb

The  Knicks open the preseason Tuesday night at home against the Nets. Photo: Daily News