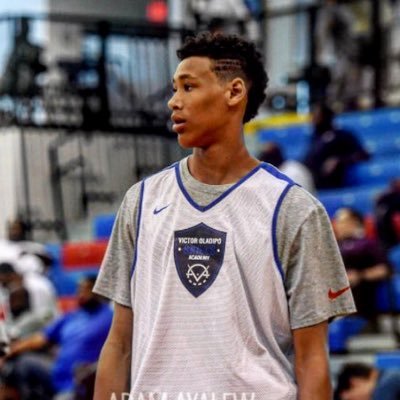 Jaxson Hayes, the 6-foot-10 power forward from Cincinnati (OH) Archbishop Moeller, committed to Texas on Friday. Hayes also considered Butler, Georgetown, Kentucky and Xavier. “I’m heading to the University of Texas,” Hayes told Scout.com. “It’s just a perfect fit. I really like coach [Shaka] Smart and really love the guys there and the plan they have for me.” Hayes also visited Xavier officialy (Sept. 15) and Kentucky (Sept. 2) and Illinois (Sept. 3) unofficially. “Think about it, I’m not sure Jaxson has ever started a game in high school. Not on varsity, not on junior varsity, and not even on the freshman team,” Moeller Head Coach Carl Kremer told Scout back in August. Kremer added: “He was a total late bloomer. As a freshman I am going to guess he was 6-foot-1 tops and maybe 120 pounds. He was literally the 20th guy we kept out of 20 on our freshman team, but you knew he had great upside. “His sophomore year he grew to be about 6-foot-4 and started to get some JV minutes, but he wasn’t a starter,” Kremer continued. “His junior year he grew to 6-foot-7, maybe 6-foot-8, and really helped us a lot. Now he is a legit 6-foot-9 or 6-foot-10, and this summer everything went to another level. He is a kid who deserves it. He has waited his time and it is kind of neat to see.” “I feel like really for me to grow more as a man I needed to put myself into a different surrounding so that’s why I felt like Texas would be a perfect fit,” Hayes told Scout. “I really connected with the guys and really connected with Smart.”   Follow Adam Zagoria on Twitter And Like ZAGS on Facebook