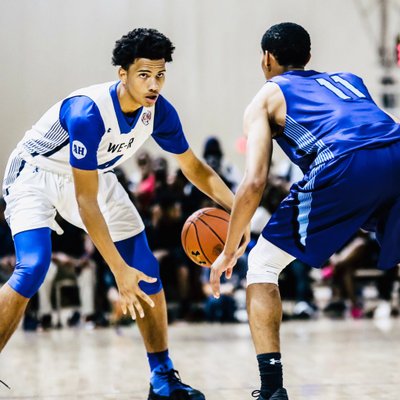 Tyrese Martin, the 6-foot-6 , 195-pound shooting gaurd who attends Massanutten Military Academy (VA), committed to Rhode Island on Wednesday following an official visit. “I liked the coaching staff,” Martin said Wednesday. “We really clicked fast. They work hard to get their players better every day. Also the workouts stood out to me. There’s a lot of energy and excitement while work out. I like that a lot. And the school is just a nice setting overall so I plan to go in and win an A-10 championship every year I’m there.” The Rams will graduate a slew of guards after 2017-18 in E.C. Matthews, Jarvis Garrett, Stan Robinson and Jared Terrell, opening up space for Martin. “They’re telling me I could go in and play a lot of minutes as a freshman,” he said before the visit. “Coach [Dan] Hurley’s been recruiting me hard.” Said WE-RI coach James Johns: “He picked URI because he felt a bond with the coaching staff and the vision that they have for him when he becomes a Ram. They were honest with him. He’s a smart kid and he felt like playing at URI would help him on and off the court. “I trusted the coaching staff as well. I knew they would take care of him and push him. It’s a family environment up there and that’s exactly what he needs.” Added WE-RI director Terrell Myers: “Tyrese is a tremendous talent with huge upside. The Atlantic 10 is a league that he should have huge success in. His size and ability to shoot the ball will eventually make him an all-league player.” Martin also visited Seton Hall. “I’ll be a guard that can rebound, put the ball on the floor, starts the break and finds my teammates,” he said. Martin joins 6-7 small forward Dana Tate in Rhody’s 2018 class.

PLAN ?️ – TO WAKE EVERYONE UP WHOS BEEN SLEEPING ON ME ?? pic.twitter.com/0BSKMfOa7K