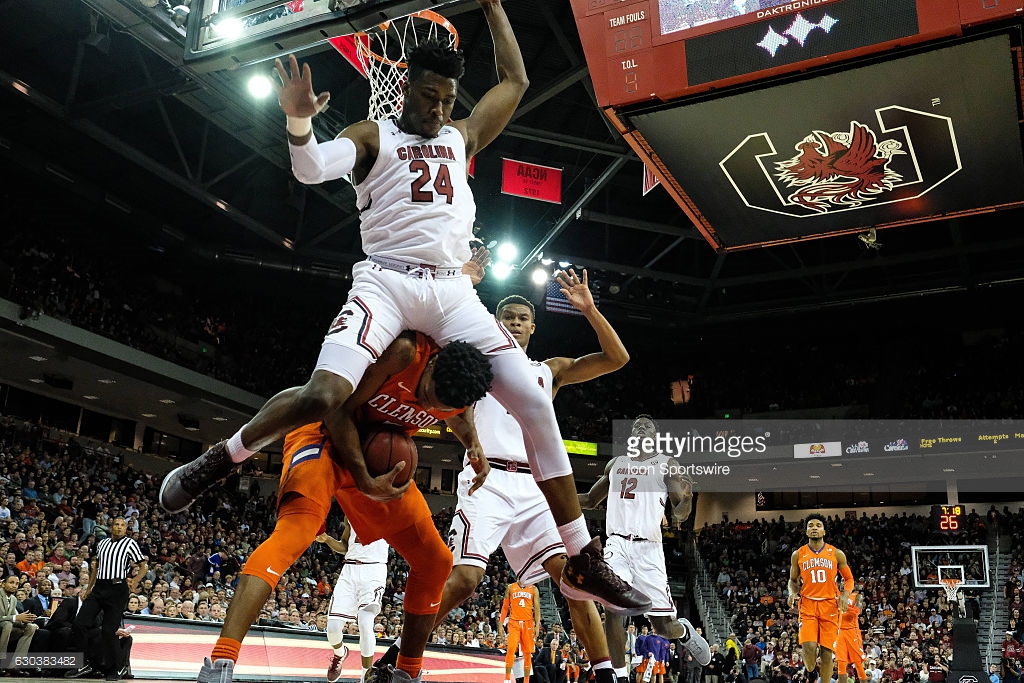 St. John’s on Tuesday officially announced the signing of 6-foot-9, 240-pound power forward Sedee Keita. The Philadelphia native transfers to St. John’s from South Carolina and will have three years of eligibility remaining after sitting out the 2017-18 season.

The news was first reported by ZAGSBLOG on Sunday.

“We are excited to welcome Sedee to our basketball family,” said St. John’s head coach Chris Mullin. “Sedee is a very athletic big man with a wide frame who comes with high major experience.”

A consensus four-star, top-100 recruit in the Class of 2016, Keita played in 29 games as a freshman last season during South Carolina’s run to the Final Four. He logged 9.6 minutes per game while averaging 1.1 points and 2.0 rebounds. Keita finished the season fourth on the team with 11 blocks, as he made two of those rejections in an Elite Eight victory over Florida at Madison Square Garden.

“We believe Sedee can really develop in our system as he works closely with our staff,” Mullin added. “His strength, physicality and ability to run the floor certainly will add a new dimension to our roster.”

Keita was the No. 22 rated power forward in the nation coming out of high school. Prior to South Carolina, he attended Shannon Forest Christian School and 22 Feet Academy in Greenville, S.C. Keita played alongside several high major Division I prospects and went up against top national competition at 22 Feet Academy under head coach Ryan Schmidt. Keita is also a former AAU teammate of fellow incoming transfer Mikey Dixon with the WE R1 program.

“I am excited and honored to join a program with such rich tradition and to play for a legend in Chris Mullin,” said Keita. “I look forward to continuing my growth on and off the court and to help St. John’s return to national prominence.”

“Sedee is an amazing athlete that has the ability to defend multiple positions,” WE-R1 coach Terrell Myers told ZAGSBLOG. “He’s a high level passer and defender with the ability to be a double figure rebounder. St John’s has gotten a really good player that will allow them to play in many different ways.” St. John’s previously added Dixon and Brewster (N.H.) Academy wing Sid Wilson in their 2017 recruiting class. They will also lose guard Federico Mussini, who signed to play professionally in Italy.

One of the most improved teams in the nation last season, St. John’s returns its top three scorers from a club that saw its Big East record increase by six wins in 2016-17. St. John’s up-tempo offense will again feature Big East All-Freshman Team honorees Shamorie Ponds (17.4 ppg) and Marcus LoVett (15.9 ppg), who are the top returning scoring duo in the conference. Highly rated transfers Marvin Clark Jr. and Justin Simon will also make their debut in Queens next season.