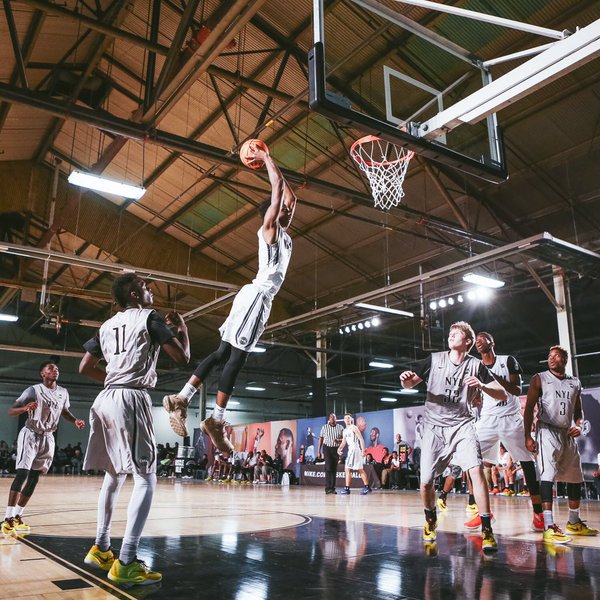 All the basketball fans and NBA personnel who were looking forward to watching Hamidou Diallo play 5-on-5 this week at the NBA Draft Combine can forget about that. The 6-foot-6 Diallo — one of four Kentucky guys expected to attend the Combine this week in Chicago — won’t participate in 5-on-5, a source told ZAGSBLOG. DraftExpress.com — which has Diallo projected at No. 36 in the upcoming Draft — was the first to report the development. The move left some NBA personnel mystified. “Him not playing isn’t going to help us figure him out,” one NBA scout said. Diallo hasn’t played competitive games in front of NBA personnel since Adam Finkelstein’s National Prep Showcase back in November. Syracuse coach Jim Boeheim, Kentucky assistant Tony Barbee and about 30 NBA scouts saw him then.

“Based on what I saw tonight and this summer he should attend college and continue to develop his game,” one NBA scout said in November. “He’s athletic and flashes some skill but has a ways to go from being NBA ready. I think someone would draft him for his talent but it’s not about making the league, it’s about giving yourself the best chance to stick.” Diallo, of course, then enrolled at Kentucky in January but didn’t play a single game for the Wildcats. Now he’s testing the NBA Draft waters without an agent and has the option to return to college. It remains unclear if Diallo has a first-round guarantee but it only takes one team to be enticed by the combination of his age (18) and supreme athleticism. The Pacers, who pick at No. 18 and 47, and the Nets, who have two picks in the 20s, called Diallo’s AAU coach, Andy Borman of the NY Rens, on Monday. Diallo, of course, is a Queens, N.Y., native so if he lands with the Nets he would be coming home. “Three teams in the 20s have multiple picks,” one industry source said. “I would definitely take him in that range.” “I would not be surprised myself if his combination of athleticism and skill opens some eyes, and then he’ll have a tough decision,” ESPN’s Fran Fraschilla said on The 4 Quarters Podcast. “Do you want to be the 25th pick in this year’s Draft, or do you want to have a chance to maybe be a top-10 pick after your freshman year? I don’t think there’s any question a team will take him in the first round, based on just his age, his size for a guard and that crazy combination of skill and athleticism.”