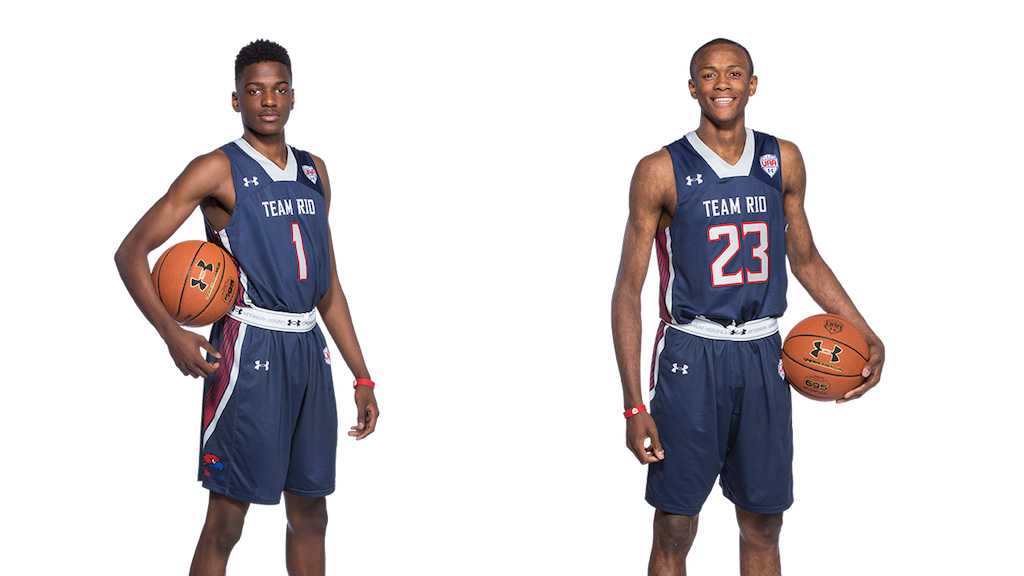 Scottie Lewis and Bryan Antoine, the two Class of 2019 stars from the Ranney (N.J.) School and Team Rio, visited Louisville on Sunday after enjoying the Kerby Derby a day before. The 6-foot-5 Lewis is ranked No. 13 on the 2019 ESPN 25, while the 6-4 Antoine is No. 14. Their teammate, Alex Klatsky, also visited with Team Rio director Brian Klatsky. “The key message that came out of it was that Coach [Rick] Pitino is all about player development and what he can do to get these guys ready for the next level,” Brian Klatsky said. “And really making sure that they vet their players, that they bring in guys that wanna do the hard work, that wanna get better, that are there to really be a part of that. It’s about out-working everybody else and they gotta make sure the guys they bring in fit that mold.” Pitino was not there for the visit, but his assistants greeted the players. Louisville has already offered both players. “They just talked about how once they get that player, they’re going to develop that player to [get to] the NBA,” Antoine said. Antoine said Louisville also had a unique message about recruiting. “They want us to know they’re recruiting us but they’re not going to be at our school, at our AAU games 24/7 but just to know that they still care about us a lot,” Antoine said. Lewis was impressed by the visit. “I thought it was a great visit,” he said. “They showed us around the campus, they showed us the stadium that they play at and they talked a lot about their history and Coach Pitino’s track record. I was very impressed by that. They talked about what they do with their players while they’re there, and how they recruit for that class and they don’t try to bring in anyone that can outshine anyone there, as far as the new freshmen. I enjoyed the visit.” The Louisville visit followed their first-ever trip to the Kentucky Derby. “That was amazing,” Lewis said. “The atmosphere and the hats and the infield, it was just a great experience to be a part of. Me and Bryan and Alex and my coach are happy that we got to come down and be a part of that.” Next up is a trip to Kentucky on Monday. The Wildcats are coming off Kevin Knox’s commitment on Saturday. “We’ll be up in the morning for our Kentucky visit,” Lewis said.         And like ZAGS on Facebook