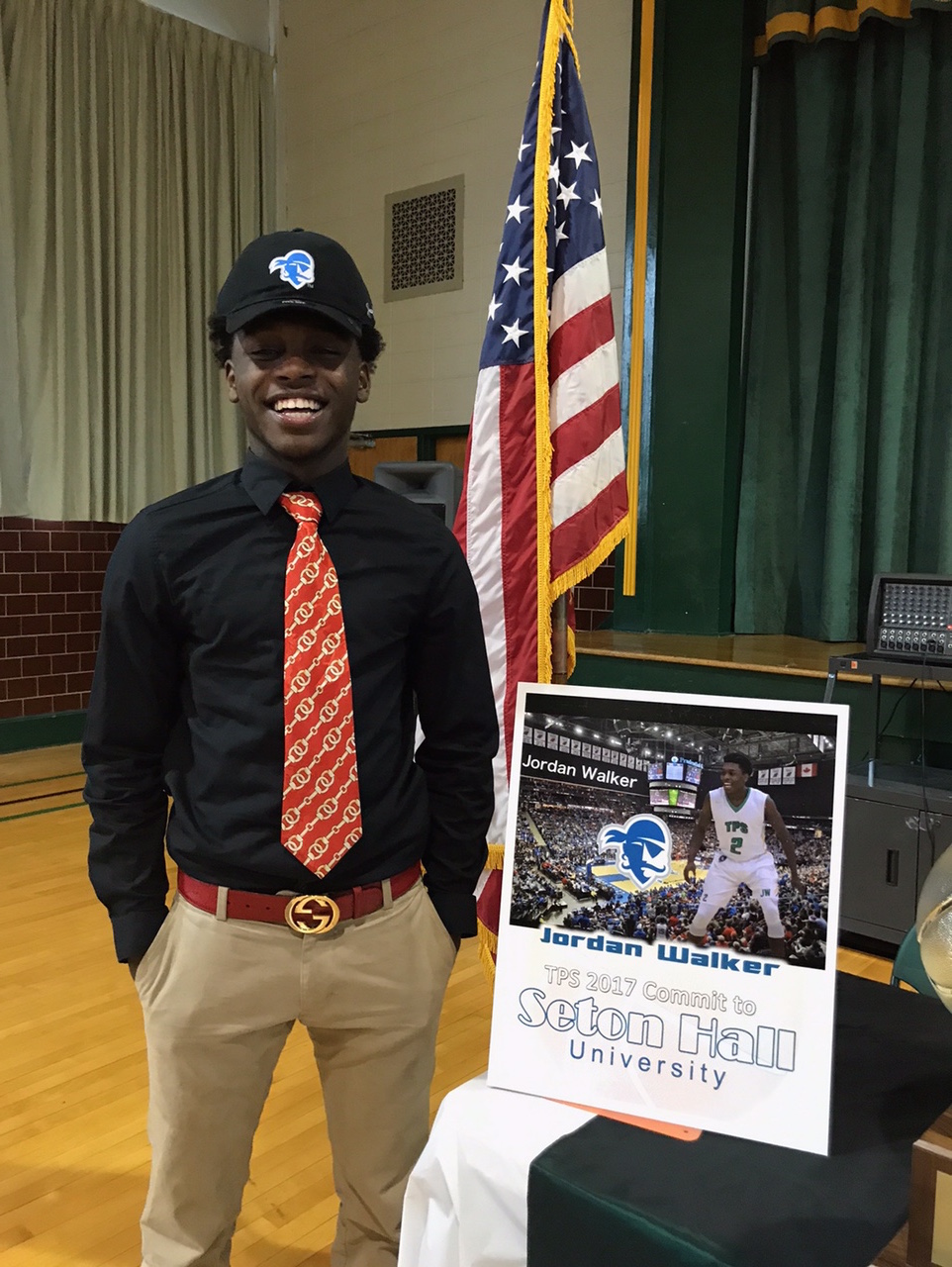 Seton Hall has landed its point guard of the future and he could soon become a fan favorite. Jordan Walker, the charismatic 5-foot-10 point guard who led The Patrick School to the Tournament of Champions crown, verbally committed to the Pirates on Monday in his school’s gym. Walker chose Seton Hall over Cal. “I liken him to the Energizer Bunny,” Patrick School and former Rutgers coach Mike Rice told ZAGSBLOG. “Every single aspect of your program, he will add energy and life to. He’s someone who maybe his first year will come off the bench, creating a change in tempo and intensity and energy like I don’t know if they’ve seen before. He’s very passionate about the game and the creativity within the game.”

Walker, who averaged 11.9 points and 4.8 assists per game for the Celtics, must continue to work on several aspects of his game. “He needs to become a consistent three-pointer shooter and [gaining an] understanding of when to attack and when to pull up,” Rice said. “And that’s always difficult for smaller, young point guards because they can get with it in high school. And in college, that drive to the basket may not be the wisest decision.” Seton Hall is also involved for 2017 point guard Trevon Duval, who is expected to announce soon between Arizona, Baylor, Duke, Kansas and Seton Hall, with Duke now the perceived favorite. Walker joins are recruiting class that includes guard Myles Cale, stretch four Sandro Mamukelashvili and big man Darnell Brodie. The Pirates return juniors Khadeen Carrington, Desi Rodriguez and Ismael Sanogo, and await work on fellow junior Angel Delgado, who worked out this past Saturday for the Atlanta Hawks and is testing the NBA Draft waters. Freshman shooting guard Myles Powell, a friend of Duval’s, also returns. “I think now they have depth at their point guard and Angel will be one of the premier frontcourt players in America,” Rice said. “I liken to him to the old-school Moses Malone, where he doesn’t play above the rim but his instincts and his ability to seek contact and use that as leverage to rebound is incredible. So I think Jordan will just bring that energy and that pace to Seton Hall which Kevin [Willard] has always had those guards who could just change the pace of the game. And Jordan will certainly do that. “And I think in turn will become a fan favorite because of how hard he plays and the creativity with which he plays.” Walker is the sixth Patrick School senior to commit to a D-1 school this year following Nick Richards (Kentucky), Jamir Harris (Minnesota), Marcus McClary (Monmouth, Bul Ajang (Tulane) and Buay Koka (Tulane).   RASHED ANTHONY WILL GRADUATE EARLY, TRANSFER Seton Hall men’s junior Rashed Anthony (Orangeburg, S.C.) will earn his bachelor’s degree from the university and has elected to transfer for his final season of athletic eligibility, head coach Kevin Willard announced Monday. “Rashed has been a valued member of our program for four years and has been a part of two NCAA Tournament teams,” Willard said. “Although he is moving on to pursue other opportunities, we appreciate all that he’s done for the program, we are proud that he is earning his Seton Hall degree and we wish him all the best in the future.” Anthony will earn his Seton Hall degree in Social & Behavioral Sciences. He appeared in 87 career games for the Pirates and is a career 50 percent shooter from the field and 71 percent shooter from the free throw line. Seton Hall’s record in Anthony’s 87 games was 54-33 (.621). This past season, Anthony had the opportunity to play an NCAA Tournament game in his home state as he and the Pirates appeared in the Greenville, S.C. first-round site, a mere 150 miles from his hometown. Despite Anthony’s departure, the Pirates have seven returning letterwinners on the 2017-18 roster that bring back 90.5 percent of their scoring and 90.0 percent of their rebounding from last season’s NCAA Tournament squad. ELIJAH HUGHES TO VISIT SETON HALL, SYRACUSE East Carolina transfer Elijah Hughes will visit Seton Hall Sunday-Tuesday, Iona May 12-14 and Syracuse May 16-18, he told ZAGSBLOG. The 6-foot-6 Beacon, N.Y., native averaged 7.3 points and 2.3 rebounds in 20.5 minutes per game last season at ECU. Hughes played at South Kent (Conn.) with Seton Hall’s Myles Powell and Syracuse’s Matthew Moyer. Adam Zagoria on Twitter