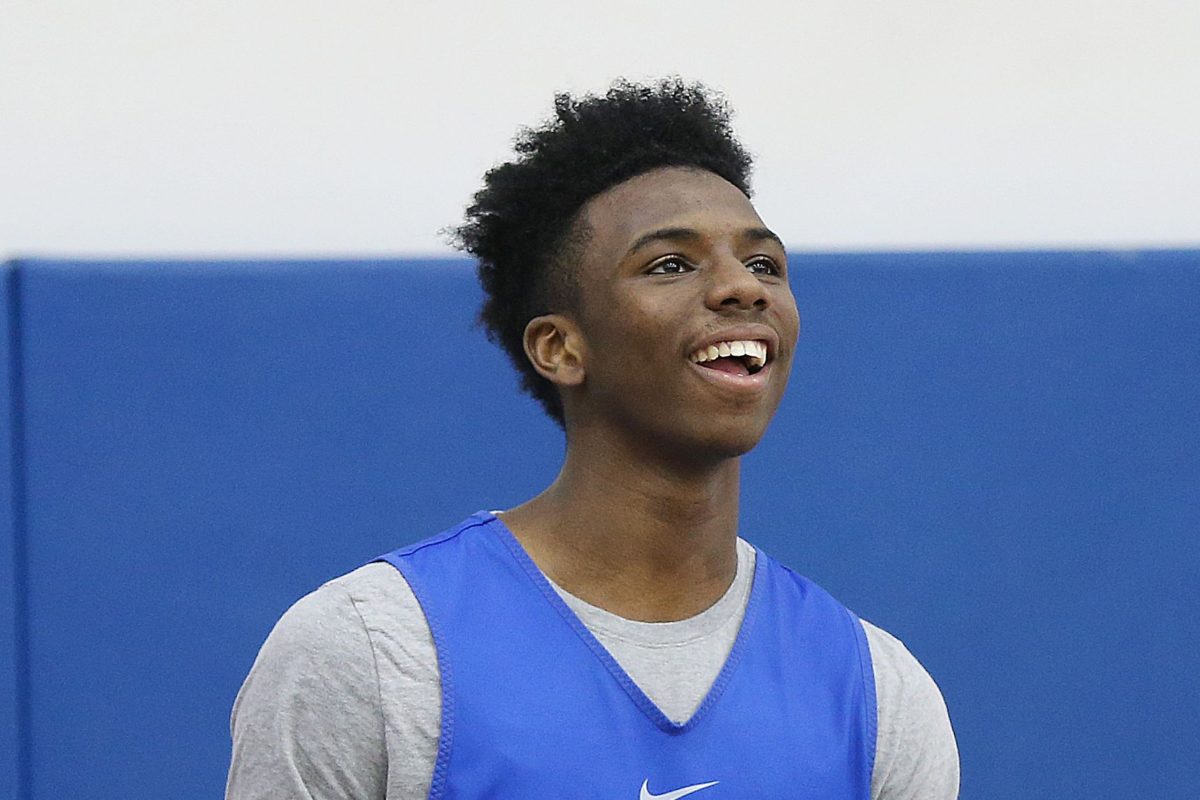 Kentucky freshman guard Hamidou Diallo will test the NBA Draft waters but will not hire an agent, raising the possibility that he could effectively go straight from high school to the NBA without playing a single college game.

So long as Diallo does not hire an agent, he will have until May 24 (10 days after the NBA Draft Combine) to make a final decision as to whether he wishes to remain in the draft or return to Kentucky.

He is currently projected at No. 22 in the 2018 draft by DraftExpress.com.

“Playing in the NBA has always been the ultimate goal for me,” Diallo said. “It’s part of what makes Kentucky so special is that it prepares you for the next level better than anywhere else. When I decided to enroll in school in January, my plan was to come to Kentucky to work on my game and to focus on school. At the end of the season, I knew I wanted to see where I was in the draft process and go through that so I could get a proper evaluation.

“That plan hasn’t changed and that’s why I am declaring for the NBA Draft. I do not plan on hiring an agent at this time. I want to see where my game is and explore my options. I just want to keep all doors open, and I want to thank Coach Cal, the coaching staff and my teammates for allowing me to pursue my dreams. My game has grown so much in the four months I’ve been at UK.

“I don’t know what the next few weeks are going to have in store for me, but I do know I’m going to work as hard as I ever have and keep an open mind. At the end of the day, this is a learning process for me and I appreciate the Big Blue Nation for being both understanding and supportive of my decision. I can’t thank you enough for making me a part of the family from day one.”

Diallo is the sixth underclassman from the 2016-17 Wildcats to announce intentions of turning pro. Guards Isaiah Briscoe, De’Aaron Fox and Malik Monk and forward Isaac Humphries have declared for the draft and either signed with an agent already or plan to. Freshman forward Bam Adebayo declared for the draft but will not hire an agent at this time, opening up the possibility of a return.

“With the information that will be available to Hami and the feedback he will receive by going through this process, I fully support his decision,” head coach John Calipari said. “It’s in Hami’s best interests to evaluate if now is his time or if he would be better served returning to school. Whatever Hami ultimately chooses to do, you’re talking about an athletic guard with great ball skills, an unbelievable finisher and a terrific defender. He’s gotten so much better in his four months with us and he’s only going to continue to get better.”

Diallo enrolled at Kentucky in January after graduating from Putnam Science Academy in Connecticut in May. A top-10 prospect in the 2017 class before reclassifying, Diallo practiced with the team and was eligible to play in games, but he opted not to play this season in order to adapt to college competition, develop his game and focus on his academics.

Once he caught up during the midseason transition process, the 6-foot-5 guard from Queens, New York, became a key player in practice down the stretch as the Wildcats won the Southeastern Conference regular-season and tournament championships before advancing to the Elite Eight of the NCAA Tournament.

Diallo is a long and athletic wing with a ton of upside. A high-flying, high-scoring guard who excels at getting to the basket, Diallo is considered an elite finisher with a potential to be a lockdown defender.

Before reclassifying last season, he was rated as high as No. 9 (247 Sports) and no lower than No. 11 (ESPN) among the major recruiting services. Both 247Sports and Scout considered him the No. 1 shooting guard in the 2017 class.

In his final full season in high school, in 2015-16, Diallo led Putnam Science Academy to a 38-3 record with an appearance in the state semifinals. The two-time all-state honoree averaged 19.0 points, 6.0 rebounds and 3.0 assists in his senior season before graduating in the fall. He averaged 17.0 points and 4.0 rebounds as a junior.

Diallo was also a key member of the 2016 USA Men’s U18 National Team that won a gold medal at the 2016 FIBA Americas U18 Championship in July in Chile, where he averaged 7.6 points and 4.6 rebounds for Team USA.

The NBA Draft Combine will take place May 9-14 in Chicago. Players who have not hired an agent will have 10 days following that showcase opportunity to make a final decision as to whether to forego their athletic eligibility or return to school.

Through the 2016 NBA Draft, of the 18 players in the Calipari era who declared for the NBA Draft after one season at Kentucky, all 18 were drafted in the first round.